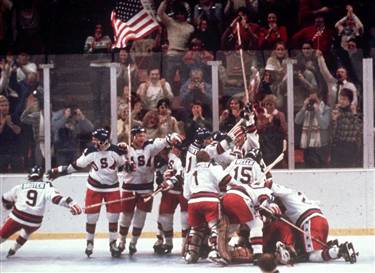 They are perhaps the most famous six words in all of sports broadcasting.  A question whose answer was self-evident to the announcer who asked it.

"Do you believe in miracles?  Yes!"

In those six words, a young Al Michaels provided the eternal inscription for what would come to be known as the Miracle on Ice and later be named the greatest sporting moment in the 20th century.  A team of young Americans had beaten the Soviet Union 4-3 in the 1980 Olympic semifinal in Lake Placid, New York in an upset so unlikely, so unexpected, so unthinkable, that miraculous was the only word to describe it.  And perhaps there was even something miraculous in the call of the final seconds…

"There was a ton of luck involved," Michaels said Saturday when I asked about the Miracle on Ice call.  "If you're in this business, you dream of being at the microphone for a game that becomes a lifetime memory for those who witnessed it. I laugh when people ask me to name the greatest event I've ever covered. I just say, 'what's number two?'"

Before our tournament began to officially name the greatest announcing call in sports history, the Miracle on Ice was the clear favorite above the other 63 and that's exactly how it played out.  Michaels' call never received less than 75% of the vote in any matchup including the semifinal where he was matched up with Jack Buck's "I don't believe what I just saw" and Howard Cosell's "down goes Frazier" in the final.  You could argue the rest of the field was playing for number two all along as well.

How is it that a call of an Olympic hockey game could resonate so thoroughly with fans who remember where they were when it happened and fans who weren't even alive at the time?  The current voice of Sunday Night Football and recipient of this year's Pete Rozelle Award at the Pro Football Hall of Fame reckons it's the feel good nature of the moment that has made it so revered for so long.  "What separates this from other unforgettable memories was that, if you're an American, it gave you a wonderful and warm feeling," said Michaels.  "This country was looking for a boost in 1980 and a bunch of fresh-faced college kids came out of nowhere to provide it.  I remember Ed Swift's great line in Sports Illustrated when the team was named 1980 Sportsmen of the Year  – 'it made you want to hug your television set.'"

34 years after the Miracle on Ice call, Michaels will return to the Winter Olympics working for NBC this February as the host for daytime coverage in Sochi.

The author of those six famous words also spoke about what constitutes a memorable call.  There's no one blueprint for an announcer, rather as was the case with others in our countdown, it's about living in the moment.  Michaels reflected, "You just have to trust your instincts. The best thing about sports is its unpredictability. Never try to script something in advance. 99% of the time it'll sound contrived. You just have to trust that the right words come out at the right time."

The right words certainly came out at just the right time for Al Michaels on a February night in 1980 in Lake Placid, New York for what has stood the test of time as the greatest announcing call in sports.