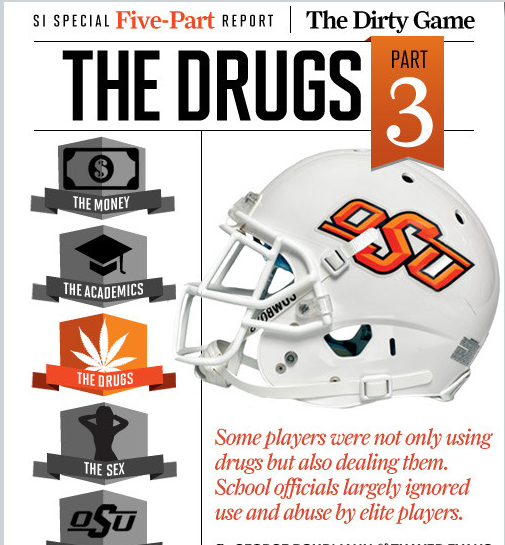 As it turns out, there are now just as many questions about SI and its reporting as there are about Oklahoma State football.

SI did get numerous individuals involved with the football program on the record, which was important for the story and added some credibility at the outset.  However, that credibility has quickly evaporated as the stories and quotes on offer in the investigation by Thayer Evans and George Dohrmann have come under fire.

Deadspin has a comprehensive rundown of at least six players who were key parts of the OK State investigation that have refuted quotes, claimed they were taken completely out of context, and blasted the journalistic work by the magazine.  Included is this Facebook post from former Cowboys player Rodrick Johnson.

Perhaps the biggest hammer blow to SI has come from ESPN's Brett McMurphy.  It's extremely rare to see one major media outlet basically call shenanigans on another major media outlet with follow-up reporting on a case.  Nevertheless, McMurphy reported that documents he received refuted much of Fath' Carter's story in the Oklahoma State SI investigation.  From McMurphy:

"Some aspects of the story of former Oklahoma State safety Fath' Carter, who was quoted extensively in Sports Illustrated's series about improprieties within the Cowboys' football program, are inconsistent with information obtained by ESPN from a number of university documents. Carter was one of the main sources quoted in SI's five-part series that alleges players were paid by coaches and boosters and had an academic coordinator complete school work for them while at Oklahoma State. Among the claims by Carter that are not supported by university documents were that he graduated from the school and attended classes in 2004 with running back Tatum Bell in which the professor gave them failing grades because their eligibility had expired.

Another discrepancy was from running back Dexter Pratt, who told SI that in his first semester, in 2009, every course he took was online. According to university records, Pratt took three online courses and two actual classes. In Tuesday's SI report, Carter said he graduated from OSU with a degree in education. George Dorhmann, one of two SI reporters who wrote the stories, also said Tuesday on CBS Sports Radio's "The Doug Gottlieb Show" that Carter "has two degrees from Oklahoma State, spoke on the record, recorded. I have no reason to believe he lied. And he's certainly not disgruntled."

Carter didn't have two degrees. Carter attended OSU from 2000 to 2005 but did not graduate, according to the university's office of the registrar. Carter also told SI that he and Bell were in the same class and got A's and then had the same instructor again for a class in 2004 but got F's. "I'd guess that there was pressure [on the instructor] to give us those A's when we were playing, but not when we weren't," Carter told SI. However, Bell wasn't at Oklahoma State in 2004. He withdrew from school after the 2003 fall semester, according to the OSU transcript he provided to ESPN."

Scans of the documents weren't in the article, but I really doubt Brett McMurphy and ESPN would have a reason to lie about these things.  This isn't Jason Whitlock pleading with Oklahoma radio stations so he can bash a former colleague.  This is a respected journalist raising significant issues with the reporting of SI with his own work.

While none of those developments are truly bombshells, the Sports Illustrated expose is suffering a slow death by a thousand pinpricks.  Every time another player comes out and disputes the story, or threatens to sue, or another report calls into question the facts it destroys the credibility of the entire report.  The key?  McMurphy purportedly has documentation.  So far, Sports Illustrated only has words.  As Yahoo Sports has proven with their reporting into college athletics (especially this week with their article on 5 SEC players receiving benefits) documentation equals credibility.

The bumpy ride has continued today.  After prompt publishing in the early morning hours for Parts I through III, Part IV of the SI piece all about sex was delayed for unknown reasons.  As of noon ET, it still hadn't been posted.  Are questions about its legitimacy causing its delay?  (UPDATE: It was published just before 1 PM ET.)

Additionally, there was a furor online that Sports Illustrated had fired Thayer Evans because his name didn't show up on a list of SI writers.  The magazine shot down those rumors and said no editorially changes had been made.

Still though, how bad does it look for Evans and SI that the magazine even has to address those rumors in the first place?  How bad is it for Sports Illustrated to see rumors about Evans being fired and think, "well yea, that probably makes sense."

Perhaps the most enlightening element to emerge from this week is a post from former SI writer John Walters.  At his personal site, Walters posted a lengthy blog entry about being a fact checker at Sports Illustrated.  The most important revelation?  Sports Illustrated now employs just two fact checkers.  The end of lengthy investigative journalism is not a desired result from this week because of a dying print magazine industry and smaller resources.  A better desired result is reinforcing the importance of making sure these seminal pieces are done right.  Hopefully the latter happens and not the former.  Walters provides one of the best reflections on what this week has meant to the industry, ambitious investigative journalism, and to Sports Illustrated:

"Magazines in 2013 simply cannot afford to devote the resources to fact-checking that they used to. On the other hand, they cannot afford to have their credibility undermined so swiftly when they endeavor to pursue transcendent investigative pieces. And it doesn’t help when a website releases a more highly praised investigative piece related to the same sport in the same week.

I’m sure everyone at SI will tell you that they fact-checked this story as thoroughly as any story we fact-checked in the 1990s. Perhaps that is true. What is also true is that the commitment to fact-checking, that culture, no longer permeates the halls of SI. They spend a lot less money on red pencils than they used to in the Time-Life Building. That’s just reality."