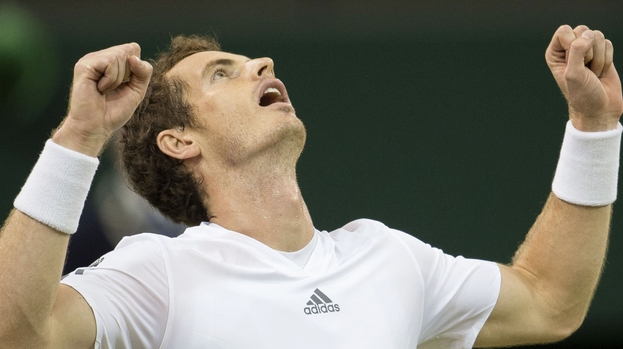 "Yea you say it best when you say nothing at all." – Keith Whitley

It seems counter-intuitive, but there are times when the best thing an announcer can say is nothing.  For a job that's almost entirely telling a story with the spoken word, this is a novel concept.  An announcer calls a game with the mission and purpose of illuminating the game with their descriptions.  Think how much more a hockey game is brought to life by Doc Emrick.  Or an NBA playoff game with Marv Albert.  Or March Madness with Gus Johnson.  Networks have experimented with announcerless games in the past and they didn't work because the announcer's words add a crucial element to the telecast of any sporting event.

And yet, there are times when silence is the most powerful tool at the broadcaster's disposal.  That was the case at Wimbledon's Center Court on Sunday when Andy Murray became the first Brit to win the title on home soil in 77 years, ending one of the most infamous droughts in sports.  (See, there's hope yet, Cubs fans!)

ESPN's tennis coverage is just a notch below their soccer coverage as some of the best work Bristol does.  When ESPN goes all-in covering an event and fills their on-air staff with top pros like Mike Tirico and Chris Fowler as well as great analysts and tennis vets (John and Patrick McEnroe, Brad Gilbert, Darren Cahill, Cliff Drysdale, Chris Evert, etc.) you're going to get a top shelf production.  That was exactly the case with Fowler and the McEnroe Brothers manning the booth for the men's final.

But as Andy Murray was serving for the win in the 3rd set something interesting happened.  Fowler and the McEnroes completely backed away.  From the time Murray went up 40-0 with 3 Championship Points to the time Novak Djokovic fought all the way back to a break point of his own, the announcers said nothing.

Now it's not uncommon for great announcers to let certain moments breathe.  Vin Scully is superb at this and in all honesty so is Joe Buck.  They know when to step back and let the moment speak for themselves.  Fowler, McEnroe, and McEnroe did this to the extreme on Sunday and it was a brilliant decision.  The trio was silent for so long some may have wondered whether the power to the booth went out.  But the sounds of Center Court were so gripping that nothing needed to be added to the moment.  It spoke for itself.  Fowler didn't need to tell the story – the crowd, the players, and the tennis did it for him.  The crowd gasping with every shot and the incredible tension at hand finally breaking into pandemonium when Djokovic's final shot went into the net was one of the most captivating few minutes of the sporting year.  And all of it described with minimal descriptions from the broadcast booth.  In fact, the silence from the booth even added to the drama and tension and excitement of the moment.

Just have a look and listen to this example of the final point of the tournament.  While it doesn't quite capture the gravitas of the ESPN booth, it does portray the trio as knowing when to step away and when to enter in…

Tennis commentary is by its nature less verbose than almost any other sport.  The announcers don't speak during the rallies and play by play and analysis has to be tucked neatly between points.  It's a testament to announcers like Tirico and Fowler that they can adjust their game so well to a much different sport than football or basketball where there's a running stream of play by play.

I'm of the firm belief there's not one blueprint to great play by play, whether it be excitement or stoicism, or what have you.  An announcer has to be true to yourself and true to the moment.  Perhaps though Sunday's Wimbledon final is a great lesson for broadcasters everywhere to take a step back and let these great sporting moments speak for themselves.  Sometimes less is more… and sometimes nothing can mean everything.