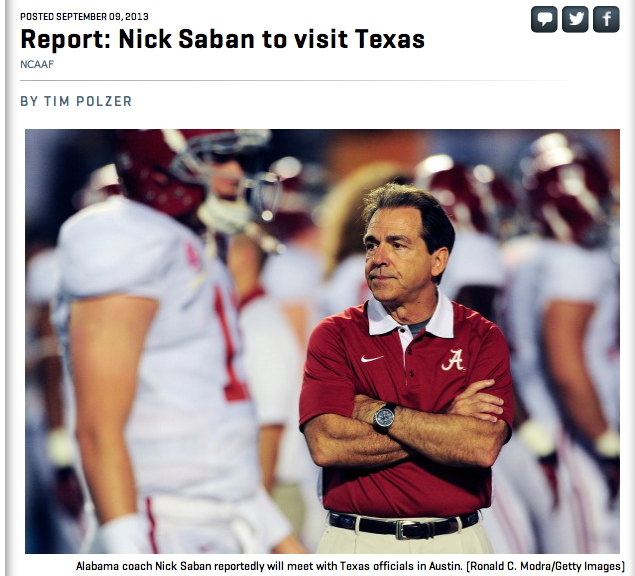 Mack Brown's seat at Texas is growing hotter by the second thanks to an embarrassing loss to BYU Saturday night.  He fired assistant Manny Diaz after the Longhorns defense allowed 550 rushing yards and now speculation is already beginning on who's going to replace Brown when he is inevitably sacked.

Texas is one of the most lucrative jobs in the country.  A huge school with a rich tradition and not to mention barrels full of cash buried in the desert thanks to their ESPN deal and the Longhorn Network.  It's a job most coaches would take in a heartbeat… but Sports Illustrated may have jumped the gun in reporting an imminent coaching change.

Monday morning the SI Wire page took a clearly facetious tweet from ESPN's Paul Finebaum and made it into a legitimate news story.

Perhaps, it's early to pile on Mack Brown, but a reliable source tells me Nick Saban will be visiting in Texas by as early as this Friday.

Monday, here's what SI had to say in an article that has already been taken down:

"The Texas Longhorns’ embarrassing defensive performance in a 40-21 loss to Brigham Young Saturday night resulted in head coach Mack Brown firing defensive coordinator Manny Diaz. But the move may be too little, too late for Brown. The Longhorns reportedly will bring college football’s biggest coaching name to Austin for a visit. Paul Finebaum of ESPN Radio tweeted Sunday that a source said Alabama head coach Nick Saban will visit with Texas officials, possibly this week."

Granted Finebaum's tweet doesn't read as sarcastic at first glance, but this is when logic is a helpful thing.  Saban and Alabama are playing A&M in Texas this weekend.

To believe Nick Saban would sit down with officials from the Longhorns is quite the leap.  You're telling me that Nick Saban, the week his #1 Crimson Tide are playing #6 Texas A&M, is going to talk to Texas about their head coaching job?  The same guy who was angry because winning a national championship took away his recruiting time is going to sacrifice game prep to interview for a job that isn't even open?

Who knew The Onion was doing work for SI.com now?