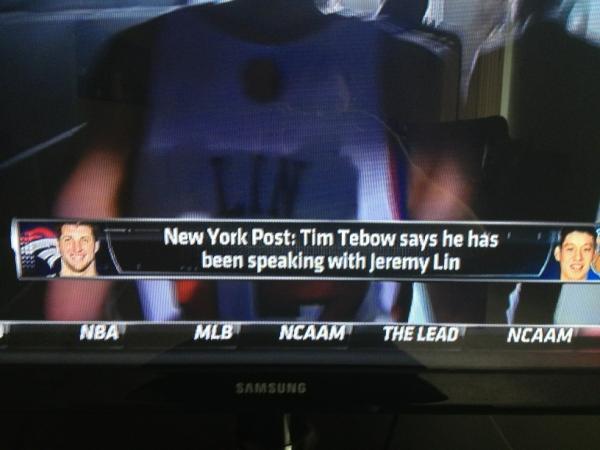 SBJ's Austin Karp put together a helpful table of all the major sports networks' ratings in the second quarter of the year (April-June) and are there ever some fascinating statistics.  Namely, ESPN's ratings are trending downward at a steep enough rate to take notice.  Compared to the same time last year, ESPN's primetime ratings are down 32%.  A third of the mothership's primetime audience just disappeared.  Vanished!  In a year!

Now, much of this primetime ratings decline can be attribtued to the monster numbers Heat-Celtics pulled in last year during the Eastern Conference Finals, but that doesn't tell near the whole story.  The 1.3 million viewers averaged were ESPN's lowest in primetime in seven years.  We're talking about the days long ago when Skip Bayless was a mere columnist and the network aired Bonds on Bonds.  (Just imagine those two forces coming together on a national stage, yeesh.)  Those kind of numbers can't be blamed solely on the San Antonio Spurs.

Furthermore, ESPN's 24 hour viewership also suffered declines from the previous year down 20% from 892k to an average of 715k.  Again, this was a multi-year low going back to 2007.  And ESPN wasn't the only Bristol network to see drops.  ESPN2 also fell 12% in primetime and 9% in total viewers.

Where are these declines coming from?  Part of the explanation seems to be a marketplace where sports fans have more options than ever before.  Viewers appear to be switching to more league and sport affiliated channels to get the coverage they desire.  While ESPN suffered sharp declines from year to year, several networks posted notable percentage gains.  Take a look at some of these increases:

Aside from ESPN, only Speed and NBATV were flat or declined amongst the non-ESPN networks tracked by SBJ.  (For what it's worth, ESPNEWS increased 8% in primetime and it'll be interesting to see how that changes with the network's evolution moving forward.)

The truth is that none of those gains bring those networks anywhere close to ESPN's viewership totals, but the trends are moving in the right direction.  Of most interest is NBCSN posting record viewership numbers in primetime thanks to the Stanley Cup Playoffs and their impressive ratings.  In a non-Olympic year, that's pivotal for the young network.  Year to date, NBC is up 14% in total viewers, which is a very encouraging sign for slow, steady growth at the peacock, especially given their struggle for eyeballs and awareness.  Golf Channel also had record viewership in the quarter for total viewers.

Another reason could be sports fans tiring of ESPN and rejecting some of their content by actively seeking alternatives.  While live game coverage remains excellent, SportsCenter desperately needs tinkering beyond pointless debates and analysis segments.  Seriously, who in their right mind would care to watch Herm Edwards break down Colin Kaepernick wearing a Dolphins hat as if it's a real story???

@awfulannouncing this was seriously a topic on SportsCenter. pic.twitter.com/vMKsxIJGbp

As if there weren't enough hyenas looking to nip and claw at ESPN's dominance and get a little piece of TV fandom already, Fox Sports 1 looms on the horizon as the most formidable foe to the empire.  If viewers are actively seeking another option, FS1 could become a new home for them and ESPN's ratings could continue to drop as more and more competitors and legitimate alternatives rise up.  Chances are FS1's audience will come from ESPN and not those viewers that are already committed to the likes of MLB/NFL Net and the specialized channels.

The decreases in ratings would be alarming for most any network… but ESPN isn't just any network.  They're a global Conglom-o worth tens of billions of dollars and still have a near monopoly on the American sports scene.  Let's take a deep breath and realize their place on top of the mountain isn't going anywhere soon.  ESPN's drop in total viewership of 177k is larger than any other network… except for ESPN2 of course.  ESPN's average audience is still four and a half times larger than any other network.

If one adds the audiences of all the networks together, the ESPN family of networks (mothership, deuce, news and U) still outdraw all other sports cable networks combined 1.07 million – 675k average viewers.  So no, Bristol isn't in an uncontrolled panic with martial law in the ESPN cafeteria and Mike Greenberg building a fallout shelter.  Should ESPN be worried?  Absolutely.  Any time competitors begin eating into your market share it's cause for concern.  However, even with these declining numbers and the much balleyhooed layoffs it's enough only to loosen some of the chains of ESPN's stronghold.  But let's check these numbers again in a year.  If ESPN drops another 15-20% while other networks continue to rise in viewership and FS1 increases Speed's audience significantly, then there may be blood.