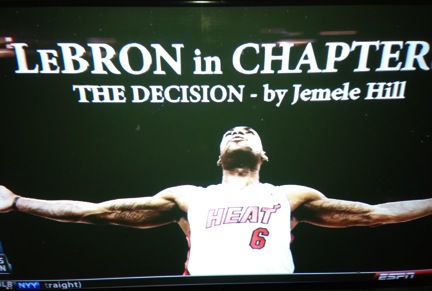 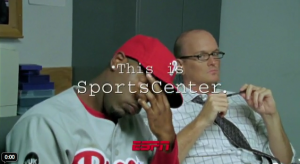 There are three childhood habits that I have kicked or would like to kick. I've already nixed guzzling up to a handful of sodas a day and recently, I believe I've finally weaned myself off MTV programming although I fear I could somehow relapse. Growing up these were staples of my daily routine that I've eliminated and now my attention turns to not watching SportsCenter anymore.

For millions, it's still a habit…. a bad habit. I wrote about ESPN's gravitational pull awhile back, the gist of that article being that people nest on ESPN at times either too lazy, too busy, or too uniformed to find something better. You see it almost daily.

You'll go to a sports bar and in the second quarter of an NBA playoff game on TNT, oddly all three televisions are watching a softball game on ESPN. When visiting friends or hosting friends, all too often SportsCenter is the program of choice. Not compelling enough where you need to stop your conversations to watch it, but something to have on in the background. For that reason, often it's what I have on when I work. It's a habit  that has become ingrained in our behavior over decades and sadly, it's become a bad habit as SportsCenter is all too often a shell of it's former self.

Given this isn't exactly a new development, you may be wondering, why rant about this now? Earlier in the weekend, Neil Best started to get my cynical juices flowing with this tweet below.

Extent to which @SportsCenter has evolved away from showing sports highlights to doing features, analysis and debate is startling.

I think most would agree with this, including those in Bristol. All too often SportsCenter is crammed with debate and commentary, usually centering around particular teams and personalities. I've actually had three people tell me over the last year that they purposely DVR PTI (on during work hours on the west coast) specifically so they don't have to watch SportsCenter anymore. Think how jampacked of fluff SportsCenter has to be where suddenly a half day old PTI is your window into what's going on in sports.

Historically SportsCenter is at its worst in June and July when only MLB is in season. This has led to programming boondoggles like TitleTown, 50 States In 50 days, and the god awful Who's Now series. So what's in store for this summer? Thus far it's been a LeBron-a-thon and I'll save you the suspense that if there is any contest, he'll win.

Since the Heat won the NBA Finals on June 20th, I believe there has been a Heat/LeBron segment on every single nighttime SportsCenter. It's been 10 days and we have more in store.

At first I accepted the LeBron segments. The Heat had won. They deserved some features and commentary and fine why not have these stupid panels of NBA analysts rehashing all things LeBron. That said, If the Spurs had closed out Game 6, you think the same craptastic panels would have been utilized to wax poetic about the Spurs? No way.

I thought maybe this could go on at most for a week, but it appears we'll have to endure at least three more days as SportsCenter is doing a 6 day "LeBron In Chapters" series that is only half way done.

I don't even know what the hell yesterday's feature was by Jemele Hill, who to her credit replied to some criticism about the feature on Twitter. It had something to do with The Decision and how he might have matured since or something. It was riveting stuff that I'll give you the broad strokes on the nearly 4 minute segment including the teaser and poll: LeBron was viewed as an asshole for The Decision and since he's worked to get better at basketball he somehow learned to internalize his shortcomings after The Decision. Apparently it's too unbelievable that a high paid athlete would be motivated to improve his game on his own. His championships were apparently born out of a realization that he was an asshole.

It was nothing new or compelling and I felt I should have been paid for watching it and LeBron should have paid to have an infomercial of himself aired (yes I know… change the channel).

So why was I watching enduring the 90 minute late night SportsCenter to start with? Quite frankly (Stephen A Smith voice), I wanted to watch highlights of what I thought to be a thoroughly entertaining game between the A's vs. Cardinals.

The game in question was a delight to watch earlier in the day. A close game with multiple lead changes that included 5 home runs (back to back shots by the Cardinals), 3 goofy errors, 12 total runs, and a myriad of ridiculous web gems. Any description beyond that won't really help my case but if you go to MLB.com, you'll see some pretty stellar plays in a hotly contested game. In a nutshell, I considered it to be the most entertaining and exciting A's game of the year and that includes some walkoffs and a pair of 18 inning+ games.

And even with said homers and web gems AND the fact that was a game between two of the six teams in MLB with 48 wins or more, somehow…. some way the entire game was not mentioned on SportsCenter. Did I mention this was a 90 minute SportsCenter?

In a 90 minute edition of SportsCenter with NO OTHER major pro or college sports in season, how could you snub what was one of the best games of the day?

Let's look at what else got snubbed on a wide open sports Sunday:

– A 1 run walkoff win by the Red Sox over Toronto. How the hell does this happen?

– What looks to be a dandy of a game with the Royals pulling out a back and forth 9-8 win versus the Twins.

– A 1 run victory for the Cubs over the Mariners.

– The entire AL West actually didn't get a single highlight in the show.

You know what else was missing? SportsCenter's Top Ten. I DON'T EVEN KNOW YOU ANYMORE! YOU'RE A MONSTER!

How can there not be a Top Ten? Even Letterman never fucks that up. You can even sprinkle in highlights of games you didn't show in the Top Ten and usually absolve yourself from the ire of pissed off fans.

Given 1/3 of baseball fans didn't get to watch highlights of their teams on a 90 minute edition of SportsCenter on a day with no NBA, NCAA, NHL, or NFL, what filler was injected instead besides the LeBron puff piece?

– 5 minutes about Mark Sanchez. No really. 5 minutes. That's enough time for probably half of those baseball highlights, but instead ESPN showed the butt fumble a handful of times and then talked about how he sucks, which I'm sure was a breaking news revelation that rocked people to their very core.

– 4 minute teaser Sunday Conversation with Kevin Durant (why now?…no idea) hosted by… wait for it… Darren Rovell. Obviously we all want that more than walkoff baseball highlights right?

Playing devil's advocate here, I am guessing a lot of these highlights were penciled into the late night SportsCenter that I've now analyzed in disbelief for the last 2 hours and they ended up being cut for additional NBA free agency coverage. With that said, I feel confident that most fans would have preferred game highlights to be kept in the rundown over the continued exaltation of LeBron, Rovell's interview, X Games montages, and installment number 500 of butt fumble schadenfreude. The fact that a Red Sox walkoff and the Top 10 got axed too really raises an eyebrow.

At this point I feel as if our habitual reliance and loyalty to what once was a pillar of being a sports fan is being used against us. What was once something that nurtured our fandom is now harming our love for sports.

ESPN has and will get away with this, but they're playing a dangerous game with their core viewership. FS1's Fox Sports Live will BY FAR be the most important venture to keep an eye on in FS1's rookie year. It's not clear how FS1 will differentiate Fox Sports Live from SportsCenter. SportsCenter can be good if not great when it wants to be and that's what is so frustrating as there has been a conscious decision to sacrifice quality in favor of self serving promotion and noise. That conscious decision has not gone over with many, but there hasn't been a viable competitor to SportsCenter to embrace.

Fox Sports Live could be awful and that wouldn't surprise me. (In fact, I'm strongly of the thought that Fox Sports Live will not compare well with SportsCenter for a litany of reasons.) That being said, if they embraced the high road and produced a product that didn't make it a habit to ignore quality games, teams, and highlights in favor of a bucket of shit, then I'd be all for it. If there is good stories happening in the sports world, I'd like to see it, know about it, and be able to talk about it. If only there were such a show.

The most distressing point is that ESPN's signature program has transformed over the years from one of its biggest assets to one of it's biggest liabilities. Until now, it hasn't hurt them but with FS1's launch nearing, it will be interesting to see if they continue to dilute SportsCenter into the swill it all too often is.