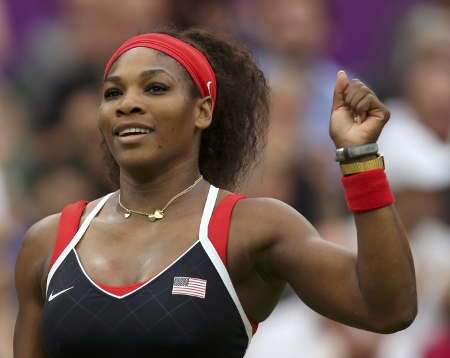 Serena Williams is really offending a lot of people these days as a (presumably) unintended result of her Rolling Stone interview.

First, there was everything wrong with what she said about the Steubenville rape case. Then, she apparently made a comment to her sister, Venus, over the phone about Maria Sharapova's dating life:

"There are people who live, breathe and dress tennis. I mean, seriously, give it a rest." Serena exits the car and the conversation moves on to a top-five player who is now in love. "She begins every interview with 'I'm so happy. I'm so lucky' – it's so boring," says Serena in a loud voice. "She's still not going to be invited to the cool parties. And, hey, if she wants to be with the guy with a black heart, go for it." (An educated guess is she's talking about Sharapova, who is now dating Grigor Dimitrov, one of Serena's rumored exes.)

Before moving on to Sharapova's response, can we talk about how the writer's "guess" is the equivalent of an 8th grade rumor mill? But I digress.

Of Serena's comments, Sharapova fired back in a Wimbledon press conference via the New York Times:

“If she wants to talk about something personal, maybe she should talk about her relationship, and her boyfriend that was married, and is getting a divorce and has kids,” Sharapova had said in her news conference Saturday of Williams’s relationship with her coach, Patrick Mouratoglou, who had been the coach of Dimitrov.

I was going to say match point, Sharapova, but she hasn't beaten Serena in nine years, sooo… check mate?

At Serena's pre-tournament press conference yesterday, she said a couple of things that stood out:

“I definitely was told of the comments,” Williams said of Sharapova’s remarks. “I definitely like to keep my personal life personal. I think it would be inappropriate for me to comment on it. But, yeah, I’ve always, in the past — you guys have known — I’ve kept my personal and professional life very private. I’m going to continue to do that.”

“I made it a point to reach out to Maria as well, because she was inadvertently brought into the situation by assumptions made by the reporter,” she said. “I personally talked to Maria at the player party, incidentally. I said: ‘Look, I want to personally apologize to you if you are offended by being brought into my situation. I want to take this moment to just pour myself, be open, say I’m very sorry for this whole situation.’ ”

Sorry for the situation? That's almost as bad as her non-apology for her comments about the Steubenville rape case where she failed to take responsibility for what she actually said, but instead shifted blame onto the magazine. Again, what I'm not seeing here is an actual denial that Sharapova was, in fact, the target of her catty remarks. Not getting invited to the cool parties? Is she serious with this crap? Serena is known for having a bad attitude towards other opponents.

If she's going to be like that, no one will want to go to her stupid parties anyway. There wouldn't be enough room for both her, her ego, and anyone else.