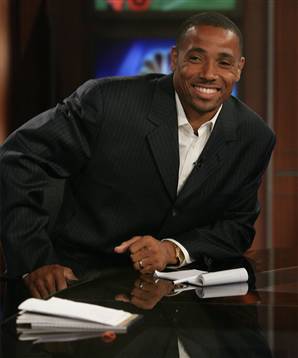 Josh Freeman was terrible in his Vikings debut on Monday night going 20/53 for just 190 yards in a loss to the Giants.  On Tuesday, the Vikings said Freeman would start Sunday night's game against the Packers.  Yesterday, it was announced that Freeman would sit due to a concussion after he came in Tuesday "and wasn't feeling so well."

That sequence of events has caused NBC's Rodney Harrison to question whether or not Freeman actually has a concussion at all.  Harrison went on Amani and Eytan on NBC Sports Radio Thursday and said Freeman's concussion was nothing more than an excuse to get out of the lineup in astonishing comments:

"I can't say that I believe he has a concussion.  I can't say I'm 100% sold out.  I'm not trying to doubt the seriousness of his injury if he has one, but it just seems like a convenient excuse to get out of a situation."

"I played safety at a high level for a long time and I was bangin' and I never missed a game because of a concussion so it just seems like an excuse to me."

The most bizarre element in all of this?  Back in February, Harrison opened up to colleague Bob Costas about head trauma he suffered during his career and the headaches he gets now.  He even talked candidly about fears over his personal health in the years to come because of blows to the head and said he was "scared to death":

"Even now at times there's a sense of loneliness, a sense of isolation, some anxiety problems. And sometimes I get headache, even in bright lights I get headaches out golfing. It's tough. And people have to understand that these players, yea a lot of their agendas it's based on money but a lot of these players are really, really suffering Bob and this stuff is for real because I'm experiencing it now. I'm scared to death. I have four kids, I have a beautiful wife, and I'm scared to death what may happen to me ten, fifteen years from now."

Quite the reversal on the subject of concussions isn't it?  How did Harrison go from those comments about players suffering, including himself, to then talking about never missing a game because of a concussion?  What happened between February and now?

Harrison isn't alone, though.  Ross Tucker at The Sporting News is skeptical of the timeline as well and writes there are some players in the Vikings locker room questioning Freeman's desire.

Who knows what's really happening here, but given the current climate, given League of Denial, isn't it starting to hear any former player question the validity of a concussion publicly?  Isn't it startling to hear anyone label a concussion as a "convenient excuse"?  Freeman played Monday night, who's to say that symptoms didn't show up until the next day?  Until it's proved that this is all an elaborate scheme to sit Freeman, this kind of talk is jarring with everything that's been discussed about concussions in the last year.

Perhaps we'll find out more in the days to come about what exactly is happening with Josh Freeman, but isn't a concussion the one thing where it's better to err on the side of caution and not resort to a line of thinking that sounds like it's from the 70's?