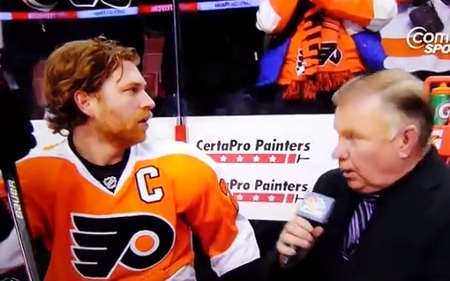 While the sports world was buzzing about Richard Sherman's postgame interview, Philadelphia Flyers forward Claude Giroux delivered a pretty incredible one himself that very few may have noticed. Though it may not rank quite as high as Sherman's (few do), it was a pretty nice barrage of F-bombs which found their way into the Comcast SportsNet broadcast.

Giroux was tossing these F-bombs in the direction of teammate Michael Raffl. It may sound like he's saying "ref" (which would have been way more newsworthy), but it appears he's yelling at "Raf."

Why is he yelling at Raffl? Who knows, but a lot of people heard it and it probably won't be the last time Giroux drops some colorful language on a hockey broadcast. Our only question is how the internet at large missed this and what Claude Giroux taught us about America.