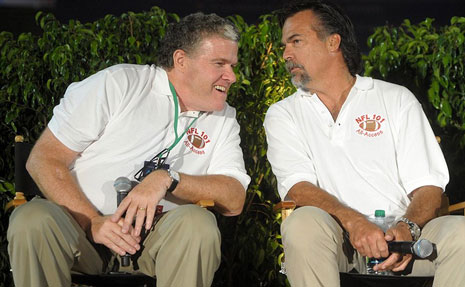 Last week, Sports Illustrated launched The MMQB, the all-football site led by Peter King with an entire staff of writers. While the early numbers aren't available, the site certainly received a lot of buzz in its first week.

Back in May, our Brad Gagnon spoke with King on the decision to bring microsite to fruition. In an all-new interview, I spoke with King, who has reported on the NFL for 30 years, about a number of topics. They included the growth of NFL coverage, the TMZization of the NFL and how NFL writers have become a staple on television.

King: "I don't think anybody could have seen or have predicted how the business has changed. I'm shocked…. There were 841 media credentials issued this year at the Scouting Combine. I think people would understand if it was 841 at the Super Bowl maybe.."

"I've sort of railed against the some of the May, June and July coverage that's sort of typified by the fact that for a day or two when I was on vacation this year, I must have seen 35, 40, 50 columnist headlines about Colin Kaepernick wearing a Dolphins cap. At some point we need to get a little bit of perspective and not think that Colin Kaepernick wearing a Dolphins cap should be covered like the Seventh Game of the World Series. In some ways, I think we need to get a little bit better perspective on things as a media. I've railed against it and will continue to do so.

ON THE "TMZIZATION" OF NFL COVERAGE

King: "TMZ is involved covering the NFL because 119 million people in the United States watched some part of the Super Bowl. While the NFL rises like a meteor and continues to do so, other sports either level off or decrease in importance or significance in our culture. So TMZ says and a bunch of other websites say, "We're going to cover this like it's the Washington Post," and I'm not equating TMZ to the Washington Post. What I'm saying the sport is covered a little bit like the Washington Post covers the White House…  It's a phenominally covered sport and business. And I don't think it's going to reverse anytime soon, if anything, I think it's going to increase."

King: "I don't mean any racial overtones, just the pioneering part of it. (McDonough) made it possible for ugly guys and fat guys (chuckles) and normal guys and women to be on TV. If he had blown it, he would set back the industry years. Not only he didn't blow it, but he made it possible for us really to have a different way of life in covering the game, (And I don't know if TV) would have been able to get the information (without the print reporters). (McDonough) is the Jackie Robinson of our industry."

THE INFLUENCE OF PETER GAMMONS AND WILL McDONOUGH TO HIS REPORTING

King: "When I was a kid, I grew up in Enfield, Connecticut., My father would bring the Boston Globe home. Peter Gammons was at the time a young guy covering the Red Sox and baseball and I just said, 'My God, how great is this column! Unbelieveable!' So I think those two columns, both he and Will have a great impact on my life and what I wanted to do for a living."

Some fascinating information from King. The entire interview can be heard on the Sports Media Weekly podcast which your humble writer co-hosts with Keith Thibault of Sports Media Journal.