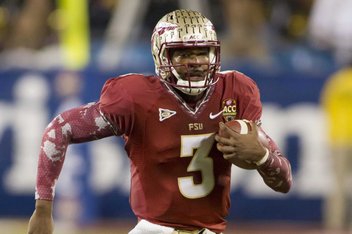 ESPN released its ratings for the Rose, Sugar and Orange bowls – we discovered (see what I did there? anyone?) that Orange & Sugar Bowl ratings were up while Rose Bowl ratings were down versus last year. Let's explore, shall we?

Last year, Wisconsin lost to Oregon, 45-38 in the Rose Bowl. 2013 marked Wisconsin's third consecutive Rose Bowl loss. The only reason the Badgers made it this year was because they were the only eligible team with a winning record in the Legends/Leaders/Whatever Division. Had Ohio State avoided a bowl ban this year, the game would have carried more interest. Nevertheless, it was still the highest rated non-NFL game on cable since last year's BCS title game as the game fell from a 9.9 overnight to a 9.6.

In the midst of all this conference realignment and the collapse of the Big East, all of which is about as clear as my brother-in-law's astrophysics dissertation, we are looking for the great story, and unfortunately the Rose Bowl really wasn't it. On the flip side, the Sugar Bowl increased a tick from a 6.3 rating to a 6.4 for Louisville's upset over Florida.

Orange Bowl ratings are the biggest takeaway though as they increased versus last year from an abysmal 4.5 all the way to a 6.5 rating. NIU lost to Florida State, but the story was better. Considering the fact that no one wanted NIU to begin with, it's a surprise the Orange Bowl could see ratings go up that much with a MAC team involved. How much of that ratings increase was NIU's Cinderella apperance and how much of it was the fact that the game was much closer than last year's Orange Bowl is hard to tell. Unfortunately, NIU never really looked like winning the game, but we could still be thankful it wasn't the 70-33 shellacking that West Virginia gave Clemson, sending us all to watch reruns of the Golden Girls by halftime.