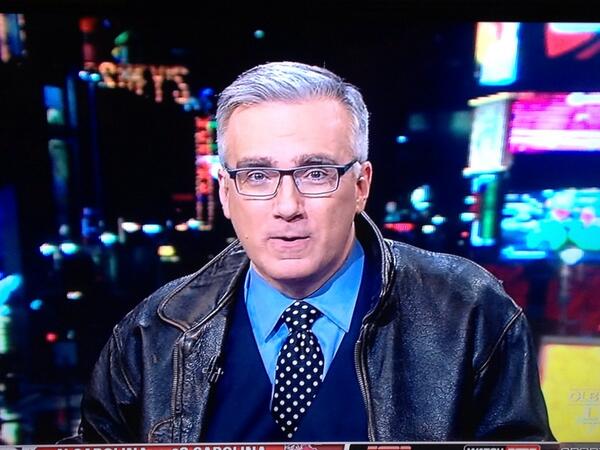 In a month of anticipated television debuts, the initial bow of Olbermann, Keith Olbermann's late night return to ESPN2, may have been the most eagerly awaited. Hell is still thawing out from the shock of the sportscaster turned political commentator turning sportscaster again and returning to the network he left in a blaze of glory.

For all the hype surrounding the launch of Olbermann's new ESPN2 show, there was something very familiar about it. Olbermann the show stands in stark difference from your other live late night sports options – SportsCenter and Fox Sports Live. However, it is very similar in format, tone, and general ambiance to the original incarnation of his MSNBC Countdown days. That is, the days before Olbermann became the angriest man on television and Countdown merely a vehicle for his rage and fervent wish for his political opponents to be shackled in town squares across America. Come to think of it, those Countdown days pre "MR. BUSH, SIIIIIR" were the last time I really enjoyed a cable news program, before the entire medium became a leading cause of concern for our country's future.

The ESPN2 show revisits Countdown segments including a more light hearted "Worst Persons in the Sports World" and a repackaged "Oddball" that also focuses on humor. Even the way the camera moves and Olbermann's paper tosses are homages to a recent past life. And as a recall to his SportsCenter days, KO even reads a few highlights from the day's action at various points in the show as a reminder he's still one of the best to ever do them. Between the opening essay, interviews, highlights, and various segments there's a natural diversity and flow to the show that is welcome. The Monday night debut seemed to strike a right balance between smart, witty, and sarcastic that was enjoyable. Because of Olbermann's history it's easy to forget he's one of the most talented anchors of his generation and he seems to be back in his natural element here and revived after a disastrous stint at Current TV.

As far as the content goes, there were a few points made that could raise questions. Olbermann calling out New York Daily News reporter Manish Mehta for fabricating a controversy of Rex Ryan was ironic considering what his new employer was able to create out of nothing regarding "Colin Kaepernick: BEST QB EVER?!" Additionally, the first show was very New York centric (after all, it's located in Times Square) and leading with the Jets for the opening essay felt like I was watching every other ESPN show from the previous 15 hours. For Olbermann's ESPN2 show to truly carve that unique space, it's going to have to live outside the ESPN echo chamber and tackle topics beyond the I-95 corridor. (Something Fox Sports Live has thankfully brought to the table.) As for Jason Whitlock's appearance, let's just appreciate denim's remarkable comeback and leave it at that.

The other issue that hopefully will be toned down in the coming days, weeks, and months is the focus on the host himself. The Olbermann debut centered around Keith Olbermann to a ludicrous extent. We get it. He used to work there. Hopefully all the references to Olbermann's past at ESPN and "This Day in Keith Olbermann History" won't be a thing that actually lasts.

Many won't give Olbermann's return to sports the light of day because of his abrasive political history and that's understandable. Perhaps that's why a statement had to be made in the first episode with Olbermann praising Chris Christie of all people – to send the message that it was safe for all to enter.

It was only one episode yes, and any sort of grand judgment on this show's ultimate qualities or fate is pointless. But in watching Night #1, Olbermann is clearly searching for the right mix of what worked from both his MSNBC and ESPN days and isn't too far off. Bringing what basically amounts to his original Countdown show to sports is a nice change of pace that falls comfortably between your typical highlight and debate/panel shows. As long as the relationship between host and network remains stable (a big if of course), Olbermann could very well have a decent future at 11 PM ET on ESPN2.

With the addition of Fox Sports Live and Olbermann you now have two more viable options for your late night sports viewing pleasure, tripling what you just had 3 weeks ago. Competition is a very good thing, proving this month of debuts to be a major victory for sports fans.