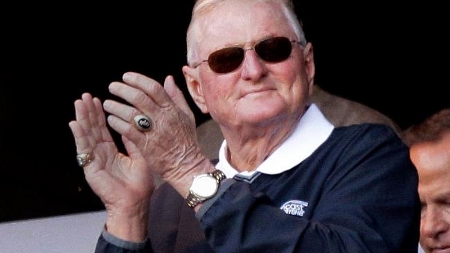 We’ve covered a lot of Hawk Harrelson here, because he’s predictable to a fault, and we have 976890 clips of him losing his s*it over a bad call or going silent for 17 minutes after an opposing team’s game-winning homerun. Hawk is so predictable, I’ve heard of games called Hawk Bingo (high and deep, way back, put it on the board, three YES’s!, etc).

Poor Hawk is particularly morose this season though, with the White Sox cruising at dead last in the AL Central, now 19.5 games back, and with just 40 wins on the season (only Houston has fewer). But the team is leading the league in TWTW, right Hawk???

Last week, The New York Times came to Chicago to profile the broadcaster and brought up the dreaded subject of sabermetrics, of which we already know Hawk is not a fan.

Inevitably the feature took a turn towards numbers and Harrelson's distrust of mathematics:

Harrelson maintains that he does, in fact, like numbers and that sabermetrics does have a valued place in baseball, but that he would prefer it be a role much more limited that (sic) it is now and that too much deference is being paid in general to numbers crunching. He called its rise over the last decade “the biggest joke I’ve ever seen.”

“So if the shortstop bobbles the ball, and I have a chance to get him, he knows that. Gordon will get busted and he’ll take the hit. There’s no number to define that in a player.”

So let's get this straight. Sabermetrics is both the biggest joke Hawk's ever seen… but it has a valued place in baseball??? I read that quote about Beckham multiple times and I literally have no idea what he’s talking about, so I emailed our resident baseball expert Joe Lucia, asking him to translate that into English, and he said:

Beckham isn’t a huge dude…6’, 190 (but honestly, that’s above average for a 2B). What Hawk is essentially saying is that Beckham is gritty (~!~!~!~!~!) for being willing to stand in the pocket and get leveled with takeout slides…though most second basemen do that, and Beckham isn’t exactly a mighty mite like Jose Altuve out there.

Alright, so Beckham is willing to be leveled and that means far more than his 2 HR and 13 RBI thus far this season. Wait, it’s still April, right? Well, no matter, he’s gritty and numbers don’t mean anything!

As Hawk told the NY Times, “I wanted to win as a player and now I want to win as an announcer.”

That’s all well and good, but there’s far more to success as a baseball team than TWTW. On the other hand, allow me to play Devil’s Advocate: Hawk has been around this game for a long time, and his playing days did not involve such complicated math. It was a simpler time. (Back in MY day, I had to give guys my PAGER number, I couldn’t Snap Chat or whatever the kids are doing now.)

When Brian Kenny had Hawk on his MLB Network show to talk numbers it turned into a shouting match, though a rather entertaining one. Kenny told the NY Times:

In fact, when searching for the best way to describe Harrelson, Kenny, his debating partner, settled on a quotation by Bill James, widely known as the father of sabermetrics.

“James once said that Earl Weaver had the gift to look at a player and see what he was and what he wasn’t,” Kenny said. “The way to look at Hawk is to enjoy him for what he is, and not worry about what he isn’t.”

Love Hawk or hate him (and there is no middle ground) at least give him credit for standing his ground, whether or not we think it’s ridiculous. He is not changing to please the masses, and that is rare these days.

And finally, Harrelson again talked about how he’d like to die in the booth calling a Paul Konerko home run, although I’m pretty sure Hawk is going to outlive Konerko’s tenure with the Sox. Paulie is 37 and there has already been whispers of him retiring soon. Sooooo….yeah fine, maybe I’m taking his description too literally, but there you have it.