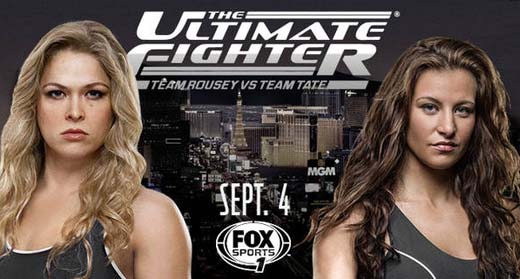 The premiere of season 18 (at least I think it's 18, there have been so many seasons that I've lost track) of The Ultimate Fighter premiered on Wednesday night on Fox Sports 1 following the UFC Fight Night event live from Brazil. Viewership was disappointing, drawing just 762,000 viewers despite the hype between coaches Miesha Tate and Ronda Rousey. That's good for the lowest viewership for a season premiere since the season 16 debut, which drew 947,000 viewers on FX.

The lead-in card drew 539,000 viewers, a drop of 35% from last week's Condit vs Kampmann card on Fox Sports 1. But UFC president Dana White wasn't exactly crying into his piles of money when the news came in. Check out this statement that he sent to Ariel Helwani of MMAFighting.

We were #1 on all of cable with M18-34 and M18-49. We also beat the US Open and the Detroit vs Red Sox MLB game. This is all part of the building process. We’ve made a commitment to work with FOX to build this network. If you look at all of the other networks we’ve ever been on we consistently pull strong ratings. The first time we put our prelims on FX we pulled 880K viewers and it grew, depending on the fight, up to 1.9 million viewers for UFC 156. Also, the TUF season with Carwin and Big Country averaged 822K viewers then Jones vs Sonnen averaged 1.3 million viewers. We currently hold the top 4 most watched telecasts on FS1 since the network launched. To be honest, our Prelim and Fight Night numbers weren’t bad considering we started on the west coast at 2pm in the afternoon on a Wednesday. The most important thing is last night’s fights were awesome and this season of TUF is great. Yes, we didn’t pull the 1 million + but we will. But, we also fucked up last night by not starting the main event later so that we could get a live lead into TUF. The bottom line is FOX couldn’t be happier with the UFC and the ratings we’re pulling. And we couldn’t be happier with the way we’ve been treated by the network.

White hits the nail on the head with his statement. We can beat the drum all we want about beating MLB and tennis, but the fact of the matter is that neither telecast on ESPN's family of networks came close to touching the UFC's numbers for TUF in the key demos, including a 0.4 rating in adults 18-49. Also as White said, the UFC is still consistently drawing the highest ratings on Fox Sports 1 and even beating the first weekend of college football coverage.

Here's one other thing that hasn't been mentioned much, but I think will be a significant factor: the +3/+7 DVR ratings. Fox is doing something extremely stupid with the launches of Fox Sports 1 and FXX – they're matching shows with similar demographic audience against each other. Not only did the premiere of TUF have to deal with being shuffled over to yet another new time slot on a new network, but it went up against FX drama The Bridge and the season premieres of FXX comedies It's Always Sunny in Philadelphia and The League. Both shows did very well on FXX, nearly matching their viewership totals last season on FX while thriving in the demographics that the UFC also caters to: males and adults 18-34 and 18-49. That's the UFC's bread and butter, and it was being siphoned away by a network under the same umbrella. There's probably a decent percentage of fans who DVRed the other two networks' programming while watching one live.

It bears repeating once again: going crazy over *anything* on Fox Sports 1 right now isn't a wise decision. Going crazy over one night of viewership while ignoring all of the other extenuating circumstances is just silly.