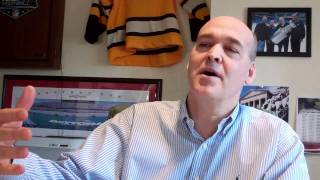 A time warp has apparently transported the world back to 2008. At least, that's the most logical explanation for NBC Sports' executive producer Sam Flood's comments to SI's Richard Deitsch about critics of Pierre McGuire before Game 1 of the Stanley Cup Final, which sound like they could have come from Buzz Bissinger circa that earlier era:

"I consider Pierre to be the gold standard, The position of being inside the glass was created because of Pierre. His skill set is uniquely suited to telling stories on air. His knowledge of the game and background of every player on the ice is incredible. He is a huge asset. He won an Emmy Award this year for obvious reasons. The sad thing about how society is today is there are a small group of people who shout loud and hide behind blogger names and fraudulent titles and attack people. They attack Cris Collinsworth. They attack Al Michaels. They attack Pierre McGuire. They attack Mike Milbury. They attack Keith Jones. They are a bunch of chickens who hide behind their Twitter names and attack people. Shame on them. If you want to say something, say it with your name behind it. But if you want to hide behind funny little names on the Internet, be my guest. But shame on you."

It's no secret that NBC hockey analyst McGuire has been the target of plenty of criticism from hockey fans over the years. However, writing that criticism off as a product of just those who "shout loud and hide behind blogger names" is insanity in 2013. Some of the most prominent criticism of McGuire has come from the hockey players he interviews, including Henrik Zetterberg rejecting his interview request, Marty Turco's 2011 mockery of him and Mike Commodore tweeting that McGuire "ruins hockey" for him. Even in the media realm, it's far from just anonymous bloggers who bash McGuire. In fact, much of the best criticism of McGuire has come from those willing to use their names. Here's a short selection:

My name is George Malik, and I think that Pierre McGuire is indeed terrible…In no small part because he could be an absolutely fantastic broadcaster if he could dial back his enthusiasm 2 or 3% to not sound like someone who is committing the broadcast equivalent of USING ALL CAPITAL LETTERS ALL THE TIME ZOMG I'M MANICALLY EXCITED and if he could be a wee bit less chummy during the interviews with players and coaches where he comes off as downright cuddly and, as such, slightly creepy.

McGuire is obviously a brilliant man with a wide and deep breadth of knowledge about and passion for the game of hockey, he's an astute observer, one of THE pioneers of inside-the-glass reporting, and he's witty, he's bombastic, funny and has his pulse on the game…

But without TSN's Gord Miller to provide a "straight man's" foil and to know when to tug at McGuire to pull him back from the heights of his FANGIRL SQUEE excitement, McGuire ends up coming off as this spastic, eccentric-to-bat-shit-insane and plain old creepily nuzzly-snuggly weirdo.

Pierre McGuire was both the most appropriate and the most unfortunate announcer to serve as a color commentator for Crosby's big night; standing between the benches for VERSUS, serving up his usual platter of mistimed trivia and verbal fellation of star players.

McGuire has fawned over the Pittsburgh Penguins captain before, so one anticipated it would happen again if Crosby managed to accomplish anything of significance during his return against the New York Islanders. But a four-point night transformed McGuire into a close-talking hybrid of Paula Abdul and Jeff Craig of "Sixty Second Preview."

This isn’t a Detroit thing or Toronto thing or an American hockey fans don’t understand thing. People everywhere legitimately hate him. So with a number of Red Wings regular season games on the national TV schedule, the only way I’ll be able to watch without focusing on the broadcasting is to answer the question: Why is Pierre McGuire employed? …

Is he there so fans can talk about how they hate him so much, using the old cliché that any advertising is good advertising? The thing is, no one knows. There hasn’t been a national broadcast without Pierre. Executives have no idea how much better or worse fans see the broadcast.

That can’t be the reason.

Maybe it’s that we know the name. We know who he is. We know he’s creepy. New things scare people. Pierre provides continuity. But new things also change the world. Again, there hasn’t been a Mike Emrick, Eddie Olczyk broadcast without Pierre. Who knows what would be better or worse?

It seems as though Pierre McGuire knows where every hockey player was born and knows their grandparents names. His colour commentary is often useless and his love for certain players goes deeper than a mothers love for their child. Perhaps the biggest thing about Pierre are his catchphrases: "monster", "big body presence", "el-kabongo", and "fine young man" are just a few to name. Throw his random knowledge, player boners, and painful catchphrases together and you have a bonafide player ruiner. While he hasn't actually ruined any players careers, he's ruined the way we think about certain players when we hear their names.

Those criticisms represent only the tip of the iceberg, too. Complaining about McGuire is a long and honoured hockey tradition, particularly during his broadcasts of the world junior championships where every second one of his comments verges on creepy. In fact, there's even a Pierre McGuire drinking game, although we can't endorse it thanks to the obvious health hazard it poses: given the frequency with which he uses these catchphrases, attempting to keep up may prove disastrous.
It's not surprising that Flood's standing up for his talent, and he's more than welcome to do so. Network executives ignoring viewers' complaints about on-air talent (hello, Chris Berman and Skip Bayless) is certainly nothing new. However, the arguments that internet critics in general and bloggers in particular are all basement-dwelling trolls hiding behind anonymity are insane in 2013.
Flood isn't the only one in the hockey world who thinks that way, though: remember Boston Globe writer Kevin-Paul Dupont and SI.com/Denver Post writer Adrian Dater's tag-team attack on bloggers last fall? Key hockey figures don't seem to have caught up to the reality of the sports media world in 2013, and that's a shame. To see NBC Sports' executive producer so out of touch with the reality of a new media landscape, one where many including this writer are more than willing to stand up and be counted, is disconcerting.

The MLB Postseason rolls on with Game 5 of the National League Championship Series and there's Thursday Night Football on Fox, NFL Network and Amazon

The MLB Postseason rolls on with Game 5 of the National League Championship Series and there's Thursday Night Football on Fox, NFL Network and Amazon