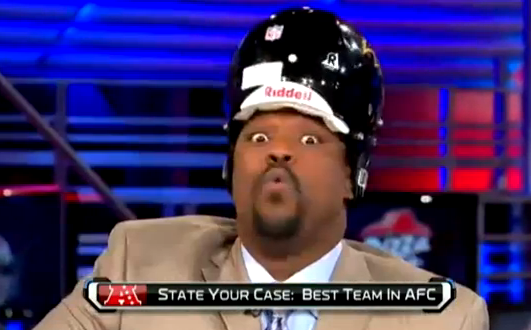 Three legendary NFL players-turned-broadcasters are barking at each other in the media, proving that it isn't easy to get over grudges and allegiances from the days in which they were football rivals and/or teammates.

Sapp, last week in the Tampa Tribune: "Simeon [Rice] was a better rusher than Michael Strahan any day of the week and twice on Sunday.''

Wait, what? Strahan owns the single-season sack record and is fifth on the all-time list, eight spots ahead of Rice. Rice probably is a little underrated, but was he better than Strahan "twice on Sunday"?

It all makes sense when you consider this…

Sapp, back in 2001, after Brett Favre appeared to deliberately surrender that record-breaking sack to Strahan: "This is a man who wants something given to him and they gave it to him. So have it.''

Sounding a little jealous, Mr. Sapp. Warren finished 34th on that all-time sack list and only once had more than 12.5 in a season.

Strahan's simple response, in 2002, after Sapp called his record a "travesty": "Jackass."

The battle ensued earlier this year, too, with Sapp again initiating contact.

Sapp, in February, on a Tampa radio station: "Say if I rewind this to Saturday at 12 o’clock me and you are sitting and I say, ‘It breaks down whatever and whatever and then you have Michael Strahan and me. C’mon, the menace and the media darling. C’mon. Madness, or Good Morning America? I mean, c’mon.”

@WarrenSapp You never cease to amaze me! Enjoy your moment. You don't need to take a shot at me to justify yourself to other people. #class

Not until now, though, has Barber decided to become involved.

Barber, on Monday, according to the New York Post: "Warren’s an idiot. He just wants to say things to be idiotic. I played with Stray for my whole career. He is the greatest of the great. He is a great teammate, he kept things light, but on game day he was as serious as a heart attack and it showed in his play."

What's odd about that, though, is that Barber hasn't exactly always been in Strahan's corner.

Barber, in 2002, when Strahan was having a very public contract dispute with the Giants: "I don't know if he realizes how much $17 million is. That is absolutely ridiculous, to turn that down. He's already the highest-paid defensive player in the league. He's already making more than most quarterbacks. I find it hard to believe this whole deal hinged on if he was going to get $17 or $10 million this year. I find that hard to believe. That's the value of my entire contact, that's why I have no sympathy. You're telling me that's not good enough for two years? Give me a break."

Sapp attempted to gain a final word yesterday, but his argument still contained some holes.

Sapp, on Tuesday, on NFL Network: “For all of the people who are not historians of the football as I am, Michael Strahan started his career at right defensive end in New York to replace Lawrence Taylor. The great Lawrence Taylor. In those three years, [Strahan] had 12 sacks, which averages out to four a year. So they put ‘B-U-S’ and they said, ‘Wait, before we call him a bust let’s move him to the left side.’ Hey, there you go. Ten-and-a-half sacks a year, 128. He’s a great left end. Simeon Rice [had] 122 [sacks] at right end and ain’t never been moved.”

Then why, Warren, aren't all left defensive ends dominating in the sack column?

Someone better tell Warren Sapp the football historian that Reggie White also spent most of his career as a left defensive end. We'll see where this feud goes next as we count down the days till the NFL season begins.