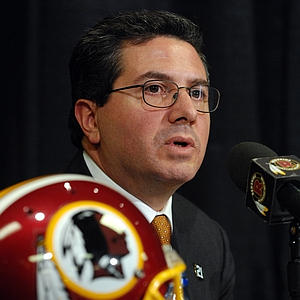 The tide of voices against the Washington Redskins' name seems to be growing. Slate may have started it in early August when they decided to not use the Redskins' name in their coverage, but Peter King and Bill Simmons soon followed suit, dropping the term from usage on their sites (The MMQB and Grantland, respectively) in late August and early September. The Kansas City Star has been trying to follow suit for their own copy, but still has Redskins show up in wire reports. Now, The San Francisco Chronicle has made the decision to only call the team "Washington." This is an effort that's gone far beyond a few small publications, or even the online world, and it's not hard to see other newspapers and media outlets following suit.

Perhaps the most interesting take on it so far comes from Bleacher Report, though, where the company is supporting writers who don't want to use "Redskins", but isn't mandating that as a site-wide trend. From B/R NFL lead writer Matt Miller  on Facebook:

"I'm a football writer, not a social activist, but there are times when the two cross over. The use of the name "Redskins" by Daniel Snyder and the NFL is one such time.

I've had issues with the team name since I read reports from the Oneida Indian Nation and their protest of the name being used. I was ignorant prior to that reading of just how offensive the team name was. Growing up in the Midwest, where I'm mere minutes from Oklahoma and many reservations, I had no idea that Native Americans found the team name to be offensive. But they do, and now I know it.

Armed with that information, as well as other reading and conversations on the subject, moving forward I will not be using the name "Redskins" in my writing. Bleacher Report has agreed to honor my request in this, and for that I'm grateful.

This is a notable move, and it's something that might make sense for our modern media world. In newspapers in particular, the concept of the institution being bigger than any individual has always been strongly emphasized, and that's led to strict outlet-wide style guides. That made a lot of sense in a world where a newspaper was an individual's main source of news and where most would read a substantial part of a newspaper all at once; consistency from story to story is useful under those circumstances. However, today's media landscape is much more fragmented, with people jumping from outlet to outlet when they see something interesting. That may reduce the need for strict institution-wide style policies, and in fact, with individual writers' voices and unique perspectives becoming more prominent selling points, allowing more outlet-wide leniency in style may be a benefit.

Beyond that, though, the Bleacher Report move may be useful as a way to keep writers happy. It's almost a guarantee that not everyone in a newsroom (real-world or virtual) is going to feel the same way on an issue, particularly one as divisive as the Redskins name. The old model of an outlet-wide style is guaranteed to annoy at least part of your workforce under these circumstances; if you ban Redskins, that will tick off some, but if you mandate using the name, that will anger others. Letting writers decide for themselves could be a useful way to avoid those headaches.

In the endgame, though, this may not be a debate for all that much longer. The tide against the Redskins name is growing, and for good reasons. With public, political and media pressure all coming to bear, it may eventually prove more useful for Dan Snyder to give up his fight and change the name. Before that, though, media organizations do have decisions to make about whether they use Redskins or not, and those decisions do matter. If they decide not to use the name, that adds to the pressure on Snyder and the NFL; if they do use it, that opens them up to complaints from those it offends. It's interesting to see a site like Bleacher Report pass those decisions on to individual writers like Miller, though, and that may be an approach other sites adopt down the road.