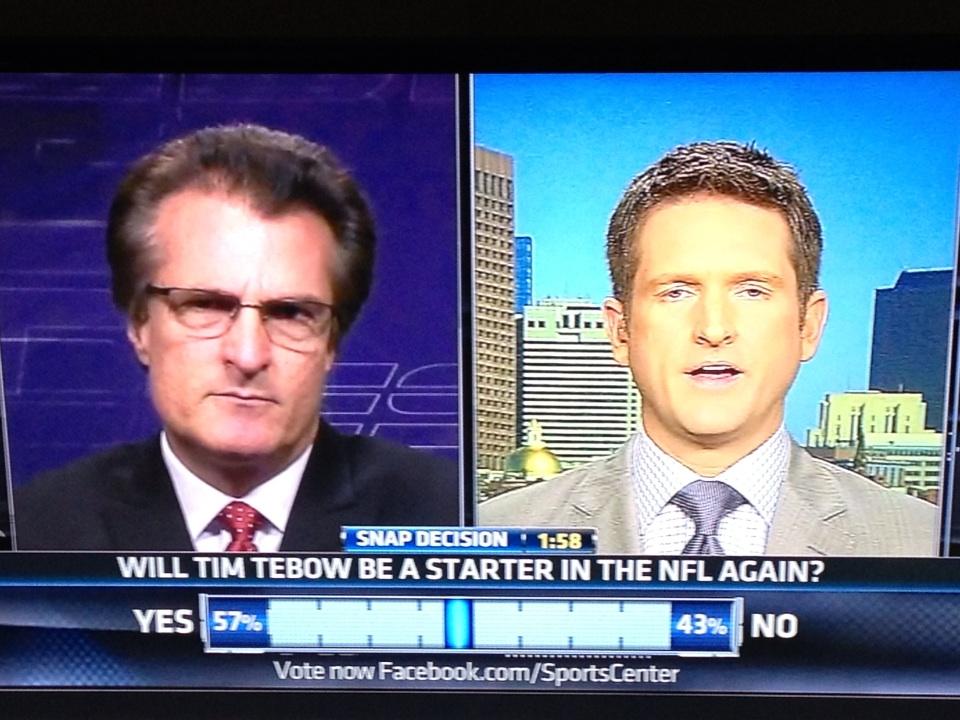 With this year by all accounts being one of the most muddled, unpredictable NFL Drafts, what better time than this to examine just how much of an expert the alleged NFL Draft experts truly are.  In this day and age, nearly every NFL fan with access to a keyboard and the internet attempts to project the 31st pick in the NFL Draft with the accuracy of Joe Bauserman.  (What you thought I would make a Tebow joke, there?)

Mock drafts are a dime a dozen and taking them with a grain of salt may be giving too much credence to these prognostications.  While guys like Mel Kiper, Todd McShay, and Mike Mayock have made a career out of studying the drafts, you might be surprised with just how much of an inexact science proves to be.  Between trades shaking up the 1st Round order, smokescreens, and players rising or falling, projections from respected national writers and draft experts fall well below the Mendoza line.

Wednesday night I compiled 12 mock drafts from around the internet from ESPN, NFL Network, NFL.com, Yahoo, CBS, Bleacher Report, and more.  These results were the most recent mock draft published at that time and excluded any draft day changes a mocker could make in the hours leading up to the event.

You can find all the results from our Mocking the Mocks Database at this link with the final scoreboard and additional notes below.

Congrats to Mike Mayock on correctly mocking just 25% of the NFL Draft's 1st Round and being far and away the most skilled mocker.  Incredibly, multiple NFL writers at major national outlets could only muster one, yes, one pick slotted correctly at the right pick.  One.  Uno.  Peter King and Gil Brandt's lone correct pick was Jarvis Jones going to the Steelers at #17, which was actually the pick nailed most often with 7 of 12 correctly projecting.  Other notes…

-If you followed the mock drafts, Sharrif Floyd's drop to Pick #23 would have been a shock. 10 of our 12 mockers had Floyd in the Top 3.  Only Pete Prisco had Floyd slipping out of the Top 10.

-Prisco, Florio, and Schrager were the only 3 to have Manti Te'o falling out of the 1st Round.

-Just 4 out of the 12 had Eric Fisher going #1 overall to Kansas City on the eve of the draft (Mayock, McGinn, Florio, Farrar).  The other 8 had Luke Joeckel going first.

-Only Mel Kiper Jr. had neither Geno Smith or Ryan Nassib going in Round 1.  Smith was mocked as high as #2 overall (Matt Miller) and Nassib as high as #8 overall (McShay, Walter, McGinn, Florio).  Nobody had E.J. Manuel in their 1st Round mocks.

-In terms of the "best picks" Mel Kiper was the only one to correctly project D.J. Fluker to San Diego and Datone Jones to Green Bay.  Only Mike Mayock had Jonathan Cooper to the Cardinals and Bob McGinn was the only pundit to predict D.J. Hayden's slot at #12, although a trade was involved there.

-If you're really paying attention to mock drafts and using them as a guide for what will happen in Round 1, stop midway through.  After Jarvis Jones to Pittsburgh, there were a total of 5 correctly slotted picks out of 180 possible or just 2.77%.

Perhaps it should be clear now more than ever that mock drafts should be consumed for entertainment purposes only and not for any kind of consistent projection tool.  Let's leave that to Joe Lunardi.