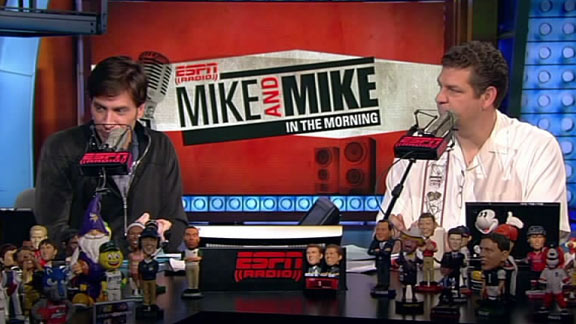 This morning on ESPN Radio's Mike & Mike, fellow ESPN Radio host Dan Le Batard made an appearance after calling out Mike Golic for comments on what's transpiring in Miami with the bullying scandal involving Jonathan Martin and Richie Incognito.  The two hosts sit on both sides of the argument – Golic offering the classic football mentality that Martin should have punched Incognito in the mouth and taken care of business himself (a common sentiment voiced in the sports world this week) and Le Batard saying violence wouldn't have solved the matter.

The conversation gets pretty heated for Mike & Mike's serene standards as the two hosts are involved in a contentious discussion for nearly 10 minutes.  Pay special attention though to what Golic says at the 5:40 mark as it opens a window into the crux of the issue here…

"Obviously you've never done anything manly in your life because you stand up."

The conversation ends in a joking manner, but I cringed when Golic said that to Le Batard.  Golic quickly stepped away from the remark and claimed he was joking, but I can't help but think that's how he and everyone else criticizing Jonathan Martin for walking away truly feels about him and those defending him.

That he betrayed the code of the locker room.

That he's not a man.

In the end, that's what this is all about.  It's nothing more than a false narrative about what true manhood really is, as if we as men are defined by how many people we punch in the face. To me, and maybe I'm way out of line and just talking crazy here, maybe I'm just falling into the trap that is the "wussificiation of America," the number of fights you've been in isn't the true measure of a man.  It's things like honor, respect, and decency, things like defending your teammates instead of leaving them threatening voicemails.

Sometimes being a man means taking the harder and higher road because you believe "punching someone" isn't a viable solution for the betterment of you as a human being, your team, or society in general.  Perhaps the nameless, faceless NFL executives that refuse to put a name to their endorsement of bullying need to look in the mirror before they call anyone a coward.

And to those individuals who says that a fistfight in the locker room solves everything, tell that to the freshman running back at California that was hospitalized yesterday after a locker room fight.

But that story from Cal will be ignored in the testosterone-charged world in sports talk radio, social media, and internet comment sections on sports pages everywhere.  A world where the standards of being a true man are who you can beat up in a fistfight, which chick you'd bang, and games of "would you rather."

As Le Batard pointed out at the end of this interview, the next layer of this story, and the larger issue at hand is an ugly mentality of victim blaming, which is sadly commonplace in other areas of society in dealing with threats of violence.  Now we're seeing it fully encapsulated in sports.  Players are against Jonathan Martin.  Coaches are against him.  Executives.  Media.  Fans.  All of the preconceived notions of locker room codes and manliness dictated that Jonathan Martin should have fought Richie Incognito and solved this with a punch to the mouth.  Perhaps the bravest decision of all is to stand up to those forces and walk away.