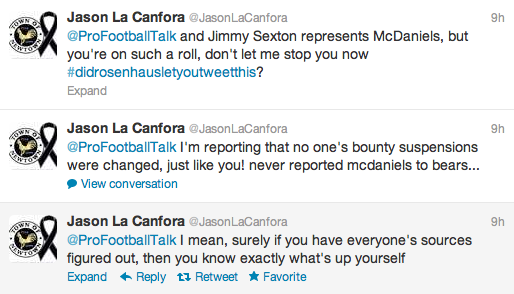 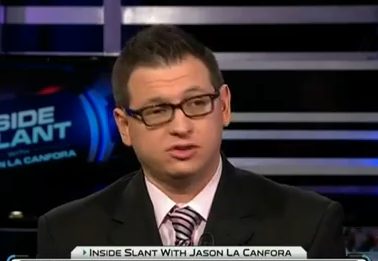 New Year's night, a nasty exchange took place between two of the nation's top NFL insiders – Mike Florio of NBC and Pro Football Talk and Jason La Canfora of CBS.  It all started when La Canfora reported fired Eagles coach Andy Reid would interview Wednesday with the Arizona Cardinals for their head coach opening.  Florio published his own article on Reid linking to reports by Albert Breer and Ian Rapoport that said Reid would interview Thursday.

Now, whether or not Andy Reid interviews Wednesday afternoon, Wednesday night, or Thursday morning is of little significance in the grand scheme of things.  Nevertheless, this slight discrepancy in reporting set ablaze a simmering feud between the two insiders.  Florio felt the need to explain things in his PFT article and on Twitter, and thereby in the process, have a go at La Canfora.  He reasoned the team was leaking Thursday to outlets while Reid's agent Bob Lamonte was leaking Wednesday (to La Canfora) to try to get a leg up for his client…

"In pointing out these dynamics, we’re not trying to pick on LaMonte; we’re just trying to peel back the curtain and help the audience get to the truth, whatever the truth may be.  With LaMonte representing dozens of head coaches, coordinators, positions coaches, and executives, promoting them for jobs includes manipulating the media, many of whom gladly will rush to Twitter or elsewhere when hearing from LaMonte, without scrutinizing the underlying accuracy or agenda or reasonableness of the information." 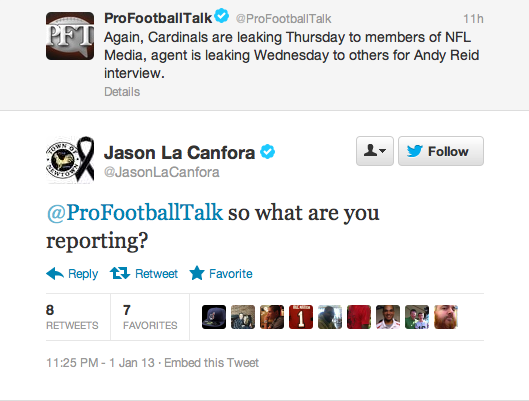 La Canfora simply had to respond after this very unusual offensvie from Florio.  While PFT comes off as a noble outlet only interested in search of the truth, it's a stunning and debatable attack on La Canfora's credibility and the identity of his sources.  This isn't the first time Florio has feuded with a fellow media member either, mind you.  But I can't ever remember one reporter so blatantly trying to undermine another in this very public way.  La Canfora had to respond, and took his shot at Florio reporting nothing on his own and aggregating news from other sources.  The two reporters then traded a couple more swings on Twitter…

Bonus points to La Canfora for creative hashtag use with that final tweet.  Sadly, the fight ended there as Florio didn't respond further and this was declared a no contest.  After all was said and done though, Florio added this somewhat passive aggressive note to his PFT article:

"It appears that the Cardinals are leaking that the interview will occur on Thursday to employees of NFL Network, and that LaMonte is leaking Wednesday to other reporters."

There seems to be an extra bit of venom here you usually don't see in public disputes and Twitter fights between members of the media.  These are some fairly personal shots fired between Florio and La Canfora including each man trying to discredit the other's reporting skills by naming agents as sources.

You'd need to have your head in the sand to think agents are not involved in leaking NFL scoops to reporters to help their clients in some way.  It's part of the reporting give and take behind the curtain as some reporters are closer to certain sources than others.  For it to spill into public like this with accusations of agents pulling the strings is an extraordinary set of circumstances.