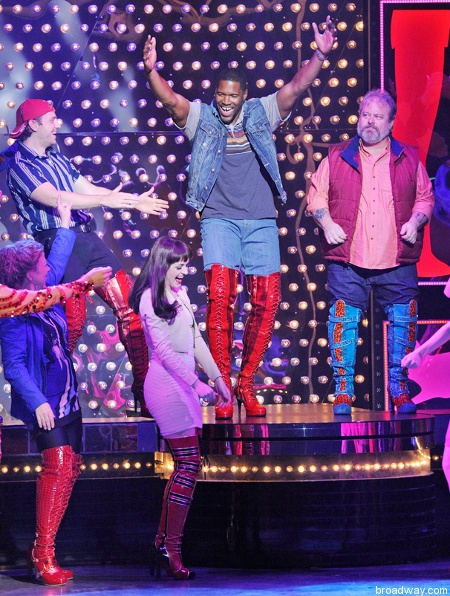 Former New York Giants defensive end Michael Strahan's done plenty of unusual things since leaving the gridiron, working as a pitchman for Subway, an NFL analyst for Fox and now a morning-show host with Kelly Ripa (amazingly, he's been able to juggle those last two roles thus far despite the cross-country commute involved). However, this week saw perhaps his strangest role yet, appearing in Tuesday's performance of the Broadway musical Kinky Boots (the story of a struggling shoemaker and his drag queen business partner, featuring music and lyrics from Cyndi Lauper!)—and donning the wardrobe you'd expect for the big finale, as you can see above.

Check out those boots! That's even a wardrobe not that far from Giants colors, given the amounts of blue and red involved, but don't expect Tom Coughlin to show up looking like this any time soon. For Strahan, this was more than just showing up in costume, though. Here's what he told Extra's A.J. Calloway about his acting appearance, which was part of a week-long Broadway feature on his Live With Kelly and Michael morning show:

The former NFL player, who was so nervous beforehand that even his fiancée Nicole was pacing outside, joked, “I have kinky boots man, what can I say?” He added that he was honored to be part of the show.

“This is Broadway,” he said. “This is Kinky Boots! This is the Tony Award-winning musical of the year and they let me come on and have lines! Are they insane?”

Strahan continued, “All the fear that I've put into men over my football career is about to leave when they see my next outfit and my finish.”

One thing is for sure, he doesn’t envy women who wear heels. “My hat's off to you! You look marvelous, but you are magicians.”

From setting an NFL sack record to feuding with Warren Sapp to co-hosting a morning show, Strahan's certainly shown himself to be a versatile performer, but this is a new level even for him (and one that could be superbly parodied on Saturday Night Live if they want to go back to the Strahan-mocking well.) The boots don't look bad on him, though! Perhaps the entire Fox NFL Sunday pre-game show should go with this sort of attire this fall. We've seen that Strahan can rock the kinky boots, but he might be in for some fierce competition from Terry Bradshaw or Jimmy Johnson….