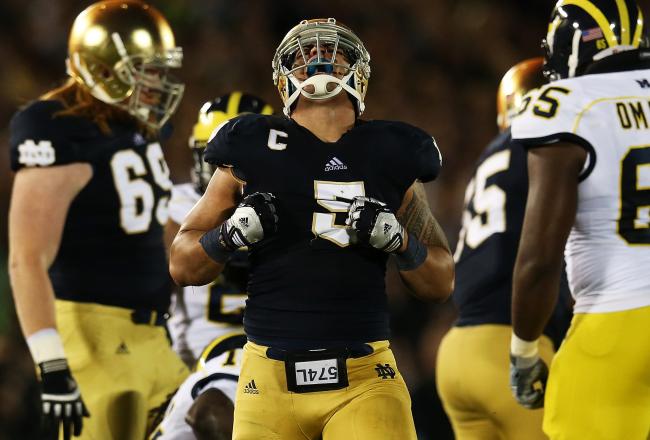 An important pillar of Manti Te'o's story with regards to the hoax of the century is that he found out Lennay Kekua wasn't dead during ESPN's Home Depot College Football Awards show in Orlando.  Here's the quote from Notre Dame Athletic Director Jack Swarbrick's press conference Wednesday night that alludes to when Te'o first found out what was happening.

"On the morning of December 26th, very early morning, Manti called his coaches to inform them that, while he was in attendance at the ESPN awards show in Orlando, he received a phone call from a number he recognized as having been that he associated with Lennay Kekua. When he answered it, it was a person whose voice sounded like the same voice he had talked to, who told him that she was, in fact, not dead.

Manti was very unnerved by that, as you might imagine. I will let him again talk about that and his reaction to it. But he maintained that secret vis a vis the members of the football family until he called the coaches on the morning of the 26th. They promptly reached out to me to inform me of this shocking piece of news, and I arranged to meet Manti upon his return to campus and did so on the afternoon of the 27th."

That awards show in Orlando took place December 6th.  Two days later, Te'o was in New York City for the Heisman Trophy presentation, also televised on ESPN December 8th.  That night, Te'o was interviewed on stage during the hour long show by Chris Fowler.  In a transcript from that Heisman interview, it reveals Te'o voluntarily talking about his girlfriend passing away after he supposedly found out about the hoax.  In fact, he told Chris Fowler the moment he found out about his girlfriend's passing was the one moment he would never forget during the season.

Chris Fowler: There were a lot of cameras around you this year, there was so much public sharing of very private moments, which shared moment will you never forget above the others?

Manti Te'o: I think I’ll never forget the time when I found out that, you know, my girlfriend passed away and the first person to run to my aid was my defensive coordinator, Coach [Bob] Diaco, and you know he said something very profound to me, he said ‘this is where your faith is tested.’ Right after that, I ran into the players’ lounge and I got on the phone with my parents – and I opened my eyes and my head coach was sitting right there. And so, you know, there are a hundred-plus people on our team and the defensive coordinator and our head coach took time to just go get one [of those players]. You know I think that was the most meaningful to me.

The transcript shows Te'o willing to forward the story of his girlfriend's passing to a national television audience after he apparently discovered it wasn't true.  There's other evidence of Te'o answering reporters' questions about his girlfriend's death, but in generalities.  This quote from the Heisman ceremony is the first time I've seen Te'o addressing Lennay Kekua's death specifically after December 6th.  Additionally, Te'o wasn't even asked directly about Kekua, he volunteered the story to Fowler.

If Te'o was indeed called December 6th and informed of the hoax, if he was speaking with the person he believed to be Lennay Kekua for a period of time between December 6th and December 26th as has been forwarded by Notre Dame, why would he go on television December 8th and voluntarily talk about how emotional it was finding out about his girlfriend's death?  Why would that moment above all others remain profound to him?  Why share such personal details about what must have been the most confusing thing that had ever happened to him if he had been informed it may have been a hoax just two days earlier?

Swarbrick says Te'o was "unnerved" by the phone call on December 6th.  And yet, he was still drawing attention to the story of Lennay Kekua on the night of the Heisman Trophy presentation, December 8th, in a live interview on ESPN.  Something does not add up.  It's just another inconsistency that must be addressed as the details of this hoax continue to unravel.

"I don't like cancer at all. I lost both my grandparents and my girlfriend to cancer."

Why would Manti Te'o repeatedly talk about losing his girlfriend after finding out it wasn't true?