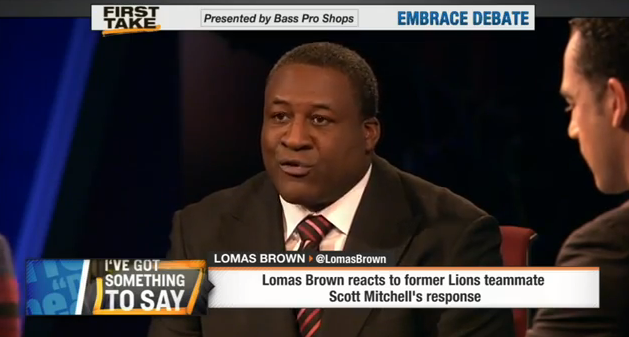 Lomas Brown is out at ESPN, according to a tidbit in this piece from Bleacher Report about ESPN pulling out of the PBS Frontline documentary. More interesting than Brown's departure from the worldwide leader is the circumstances of his release, which could simply be coincidental, but sounds awfully foreboding given the current climate:

Former NFL player and concussion litigant Lomas Brown has appeared on ESPN's First Take and served the company as an NFL analyst for nearly 10 years. He was released from the company the day before Miller's report and told Bleacher Report that this reporter was the second person to note the coincidental timing of his release. He says that he "hopes (his) support of the concussion litigation wasn't part of (his) being released."

Now isn't that interesting? Brown has been largely out of the spotlight since a December controversy about Brown admitting he missed a block on purpose, causing teammate Scott Mitchell to get knocked out of the game. The pair kissed and made up, and that seemed to be that. But now we're finding out about Brown's release last Thursday, which seems like an odd time to terminate someone's employment… unless of course, there are other issues (like the Frontline mess) afoot.

In the B/R article, Brown was vocal about his displeasure with ESPN's coverage towards concussions, and that his viewpoint may have led to his release. Going forward, it's worth keeping an eye on the public viewpoint of ESPN's analysts in relation to concussions. If other analysts continue to discuss the dangers of head trauma and plead for change, there were probably other circumstances at play in Brown's departure. But if the concussion talk starts to quiet down on ESPN's airwaves, that combined with the withdrawal from Frontline could mean that something bigger is at play here.