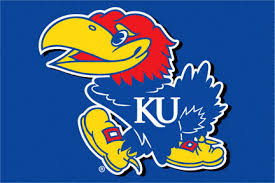 Forget working out mega rights deals with conferences, now networks are going straight to the universities themselves!  First it was the Longhorn Network, now ESPN has signed a deal with the University of Kansas to distribute at least 70 games nationwide through ESPN3 including six men's basketball games…

"Kansas Athletics and ESPN have agreed to a seven-year agreement, beginning with the 2013-14 academic year, under which ESPN3 annually will carry a minimum of 70 live events distributed nationally, one of the largest deals the multiscreen network has signed to date.

Kansas Athletics announced recently an agreement under which Time Warner Cable will annually air 50 KU contests – including two exhibition and four non-conference men’s basketball games – exclusively on Metro Sports in Kansas City and in the state of Kansas. ESPN3 will deliver those 50 events nationally outside that territory. ESPN3 will also carry – exclusively – a minimum of 20 additional contests nationally, including in Kansas City and the state of Kansas. ESPN3 currently reaches more than 85 million homes nationwide to fans that receive their Internet or video subscription from an affiliated provider. It is accessible online at WatchESPN.com, on smartphones and tablets via the WatchESPN app, through ESPN on Xbox LIVE to Gold Members and on Apple TV.

Obviously the big selling point is men's basketball and with Andrew Wiggins coming on board the timing couldn't be better for ESPN3.  Is this the new wave of the future in televising college athletics?  It's a complex question.  We've seen universities sign their own rights deals with Notre Dame football, Texas, and even BYU football getting stand alone deals with networks.  However, I don't think this is necessarily going to be the status quo from now on.  With no Big XII network to speak of, Kansas has more freedom than other universities to sell their second and third and fourth tier rights.  The chance for Florida or Alabama or Ohio State to do something similar would not be as high because of SEC Net or BTN obligations.  However, this might inspire other schools who have secondary rights available to ink deals to give them national exposure.

For Kansas it's a smart deal for obvious reasons but ESPN has a couple positive takeaways as well.  Not only do they get a huge slice of inventory for ESPN3 (granted, Kansas volleyball and baseball isn't going to move any needles nationwide) but they set the course for a future where online rights become a larger piece of the sporting pie.  The Jayhawk Network on ESPN3 may not seem like a big deal now, but it could be a prelude to what we see more of in the future.