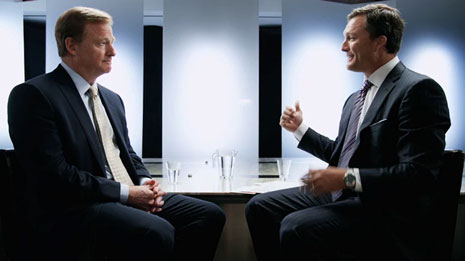 Awful Announcing: Fox Sports has some experienced people on staff. You're a bit of a fresher face, having entered the media world in the last half-decade or so. How did you end up landing this interview with the commissioner?

John Lynch: I've done features for Fox throughout the years. It's one thing they've had me do in the postseason, for instance. And I think they've turned out well. And it's something I enjoy doing, and so when they started this Fox Sports 1, one of the shows that they were launching was this one-on-one concept. And they came to me, like they did a lot of talent, and said, essentially, we want you guys to think who you would most enjoy talking to, kind of your bucket list. And I thought it would be fascinating to talk to Roger Goodell. And so I've had a relationship with Roger over the years, sometimes getting called into the principal's office when I was a player, but I've always — haven't agreed with him on everything — but I've always had a respect. I picked up the phone and called Roger and told him what I wanted to do and he said, "Sure, love to do it." That's not something that he does a lot of, so it was very humbling that he said yes. He was more than gracious with his time. It looks like an interview that all happened on one day [but] we were in there and then two days after we filmed, they settled [the lawsuits]. And so we called back to Greg Aiello and everybody at the league and they were very accommodating, allowing us to come back in so we could update it after the settlement.

JL: At the end of the day, I really believe it was good for all sides. I think this is one thing I agree with the commissioner on — I think that the people, the players that needed the help the most are gonna get it right away. I think every player, as he said, is going to be allowed to go get a baseline [concussion test] and it wasn't just players on the suit, all retired players are gonna be eligible. … And I think most of all for me, this has been a real black eye for the league, so to put something out — and I think there's more to come — but I think to somewhat put it away and now focus on everything good about football is good for everybody. Was it surprising that the number wasn't bigger? This is a league with about $10 billion in revenue for the first time this year, so I think that could be argued, but ultimately I think the fact that it's over with and people that are needing the help the most are getting the help, I think that's a good thing.

AA: The commissioner is good at getting to party lines and rarely puts his foot in his mouth. Were there any answers that frustrated you?

JL: Honestly, he's very smooth. And you knew that going in. He does this quite a bit, his dad was a politician and he's got a PR background. But I was surprised when I went back and watched it — I did ask very tough questions and Roger's an intense guy, he's a passionate guy, and he did get visibly a little, not upset, but bothered with some of the questions. But he answered them all and I think he was actually very forthright. And I think that's what's fascinating about the interview. … I was very pleased in that respect.

AA: I found it ironic that he said he'd be a safety if he could play any NFL position, because a lot of defensive backs feel they've basically been neutered by some of the rules he has pushed.

JL: You're right, and that's a great point. And that was really the premise for why I picked Roger Goodell. Because there was a little bit of confusion. This is a guy when he first became the commissioner, I loved him, because [Paul Tagliabue] kept a distance from the players. It was like, "I'm over here and you guys are over there. We don't interact. That's just not the way it works." Roger was very [different]. I'll never forget, when he first became commissioner I was still playing, he came out and would have lunch with us. He came to your facility and asked you, "How can we do things better?" which I know I loved and I think a lot of the players loved. And there's been some tough negotiations, there's been this whole concussion issue, and so I haven't really liked a lot of the decisions he's made on those, and so it was kind of a quest to go and say, "Who is this guy? Is this the guy that my instincts tell me is a really good man who cares about the game, cares about the players? Or is he a guy that sometimes his decisions puzzle me?"

So that was why I went there, and I did share with him — some on air, some off the air — that, for instance, I think it's not good for anyone that we sit here every week and it's like a rap sheet of players who have been fined. I think that should stay in house. I don't think it's good for the game, I think it scares the heck out of moms who are already hearing so much about these concussions, and it just shines more of a light on that. And I think very few of these fouls are egregious to a point where someone's intently trying to hurt someone, but one thing I learned is he doesn't care. He doesn't care about intent, this is something he feels like it has to be done to save the game. And that's where I come out disagreeing with him. I always believe that this is a tremendous game — it's been great for years upon years — and your job's to kind of get out of the way. He believes his job's to go in there and put rules in place such that it can survive. And I think the only unfortunate thing there is that it takes away from one of the great realities of this game, which is that players on both sides really respect each other.

AA: Did you walk away from this interview with any regrets or did you feel like you achieved what you wanted to achieve?

JL: Yeah, I achieved it. And I think, first of all, he doesn't do these. So we have over an hour on tape of questions and answers turned into a half-hour show. I think we asked a lot of the very topical questions that people want to know about. And like I said, I think he was very forthright with his answers. And we had some fun at the end and laughed a little bit. I think it will allow people to get a lot better picture of who this guy is and what he believes in. I think, like me, not everyone will agree with every decision he makes, but I think I came out with a respect and I think he's a good man.

AA: Was anything off limits?

JL: No, to their credit, they didn't say, "Hey, you can't ask this, you can't go there." There was one question about a poll that 61 percent of players in January gave him an unfavorable rating. And you could visibly see his face get a little bit red. It got a little uncomfortable there for a second, but he went on to answer the question and I appreciated that. And I think we had a great rapport. I think he got a little irritated with some of the questions, but he was very professional and answered them. I think it was very successful, I'm very pleased with the way it turned out.

What did you think of the interview? Let us know in the comments section.