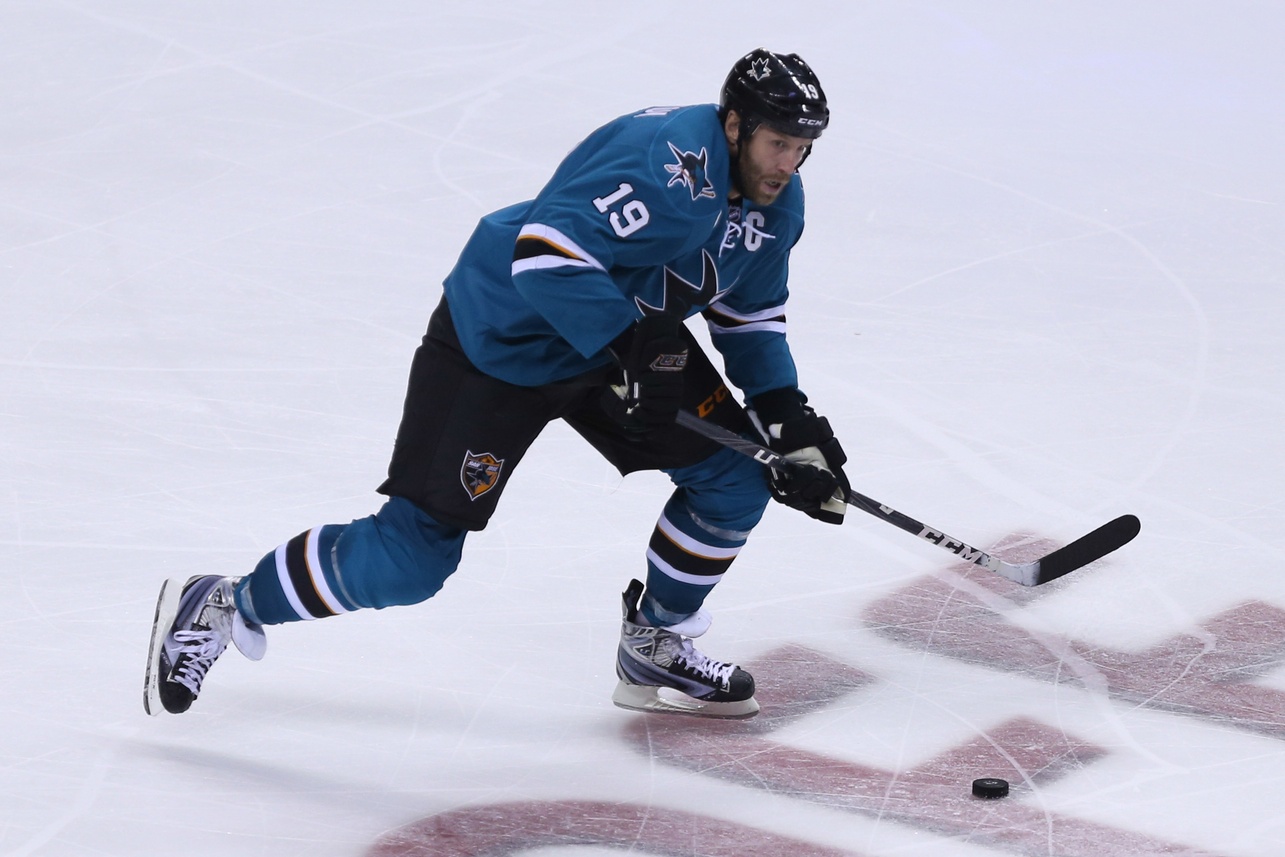 San Jose Sharks centre Joe Thornton's comments this past week about how it's silly for media to criticize teammate Thomas Hertl for his four goal performance and how he would celebrate a hypothetical four-goal night of his own in rather explicit fashion understandably spread around the internet thanks to the hilarious nature of his comments, but they also left some debating whether these comments should ever have been published. They were made to a roomful of media who were interviewing Sharks teammate Patrick Marleau, but Jason Botchford of Vancouver newspaper The Province was the only one to initially publish them. That led to plenty of blasting of Botchford, particularly from the Sharks organization. Here's what Scott Emmert, the team's director of communications, said in a statement:

"I don't think it would be a surprise to anyone in the industry that ‘locker room talk’ exists. Professional reporters understand that concept and respect it. This is a pathetic attempt to generate some page hits and controversy by reporting an off-the-cuff and off-the-record comment made by someone who wasn't even being interviewed at the time."

It's notable that Emmert isn't alone in that stance. Many members of the hockey media also criticized Botchford for reporting this, and accused him of violating the supposed code of the dressing room. Some, like Vancouver Sun columnist Cam Cole, called his actions "crossing a line." Others like Yahoo's Greg Wyshynski and Sportsnet's Mark Spector said they wouldn't have reported this quote, but they understand why Botchford did. Fiercer criticism still came from some corners of the web, though. Here's what Bobby Brooks of iSportsTimes had to say on the matter:

The issue with Botchford's reasoning is that among those "20 reporters", he was the only one to publish it. His publication, The Vancouver Province, has been in this business for decades. To say that the newspaper would have had a problem with him not publishing this joke is, well, a joke in itself. What we have here is a rogue reporter who used poor judgment. If he was acting professionally, he would have asked Joe if he could quote him on that. Clearly Thornton would have said "no".
So where does this go from here?  My first thought is whether or not players are going to even talk to Jason Botchford after this. In fact, I'm surprised that he still has a job after that. But more importantly, what will this do to player-media relations?
Will young players be more reluctant to open up around reporters?  Will more media members feel obligated, or entitled, to publish more "off the record" comments?
We can only hope that this was an isolated incident because at the end of the day it is the fan who would suffer. As entertaining as the quote was, it was reported in bad faith and crossed an ethical line

What this really shows is that there's a vast divide in opinions about exactly what off the record means in a sports journalism context. In journalism in general, there wouldn't be any debate about whether Thornton's comments were usable; any comments made during a media scrum, even if by someone not being interviewed, are fair game, as pointed out by CBC political reporter Kady O'Malley. Usually, in order for something to be off the record, the source has to ask for off-the-record status before making their comments and the reporter has to agree. As Vancouver radio host Matt Sekeres mentioned, that means anything with multiple reporters means the source has to get each of them to agree not to publish it first. Thornton definitely didn't do that here, so his comments wouldn't be considered off the record in any traditional journalism context.

Should locker rooms be different, though, with media having to get specific permission to relay anything from them? Well, many sports media members treat them that way, but that isn't necessarily a good thing. That's a dramatic shift in the typical media standards, from "you can report anything except what you specifically agree not to report" to "you're only allowed to report things cleared by the subject." Having things the other way around wouldn't necessarily mean that media outlets all become filled with explicit locker-room talk, either; for one thing, even if comments are on the record, each journalist and his or her publication can decide which ones are newsworthy enough to relay and which ones aren't. Thornton's comments are hilarious and noteworthy; not all such ones are. Defending Botchford's right to report them doesn't necessarily mean that everything said in a locker room ever will show up in the media.

Perhaps the most crucial debate here is if locker rooms count as extra access. When media outlets receive expanded behind-the-scenes access beyond what they'd normally see, they usually have to agree in advance what's fair game to report and what isn't. For example, see Bruce Feldman's great CBS piece on Texas A&M's behind-the-scenes preparation for Alabama this year, or Pete Thamel's Sports Illustrated look at how Ohio State's in-game headset chatter goes. Both writers were allowed into circles media don't typically get access to, and they likely didn't pass along everything they saw and heard; in particular, Thamel notes in his magazine piece that he agreed to use different playcall names to protect Ohio State's signals. Those kinds of agreements are a long-standing part of journalism, and they allow this kind of behind-the-scenes reporting to take place. Some might argue that being allowed into a locker room is similar and comes with its own rules and restrictions.

From this corner, though, there's a vast difference. Locker rooms aren't really extra access, but rather a vital part of covering a sports game in this day and age, which is why Don Cherry's comments earlier this year that women shouldn't be allowed in them were so ridiculous. Equal access to locker rooms was a hard-fought right (a struggle shown off well in the ESPN Nine for IX documentary "Let Them Wear Towels"), and a necessary ones: locker rooms are the places teams have established for post-game interviews, post-practice interviews and the like. They're a place for working media, and as Sunbelt Hockey's Andrew Hirsh pointed out, that means comments made while media are in the room should be considered on the record.

This isn't a case like the Bo Pelini tape, which presumably came from someone recording him without his knowledge; Thornton clearly was being recorded, and he should have been aware of that. Many media members and outlets elected not to report his comments, and that's fine; that's their discretion. However, arguing that all locker room comments are off the record unless specified otherwise is a much stricter regulation than that seen in most journalistic situations, and it's one that would likely handicap media members significantly and reduce what information media consumers are able to get. Debating whether Botchford and his paper should or shouldn't have run with Thornton's comments is completely fair game, but arguing that they were off the record is a problematic approach that could significantly diminish the value of locker-room access.