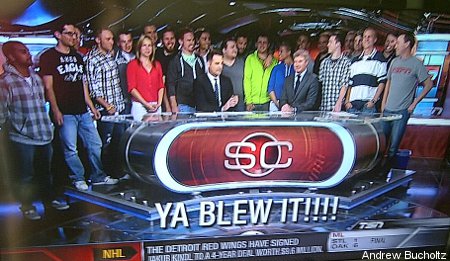 While Jay Onrait and Dan O'Toole are just entering the American stage with their move to Fox Sports One, where they'll be a crucial part of that network's ambitious plans to challenge ESPN, the late-night TSN SportsCentre anchors are leaving behind tough shoes to fill in Canada. The pairing, which started shortly after TSN brought Onrait aboard in 2002, has been a dominant feature on the Canadian scene, with the Onrait/O'Toole SportsCentre drawing nearly 20 times the viewers of its nearest competitor (Sportsnet Connected) during an average week last fall. Onrait and O'Toole have shone over the years thanks to a mix of sports, humour and out-and-out zaniness, and that was all featured in their final show on TSN Friday night. Appropriately, the Top 10 on that show was Onrait and O'Toole's best moments over the years. Here it is (from an earlier airing of SportsCentre with Rod Smith):

There's some spectacular stuff in there, including "I'm pregnant!," Onrait's trombone/vuvuzela, dances, Phantoms and Schtickys. Don't get the wrong impression from that Top 10, though; O'Toole and Onrait can do more than just clown, and they're not going to turn into Frank Caliendo. That clip celebrates some of their funniest and most-out-there moments over the years, but while those have been fantastic, what's led to their success is that they largely do still keep SportsCentre as a show about sports: they just make it funny. The rest of the final show showed that off very well: yes, this was a sendoff for two of TSN's biggest names, but it was also a regular news and highlights show, and they brought the appropriate mix of taking some highlights and segments seriously and leavening the mood with quips about others. Here are some of their best lines from throughout the show.

Onrait and O'Toole complained about the heat early on, with Onrait saying "I'm like Elvis in 1977 just before the end!" They then went through some regular highlights, prompting Onrait to say "I'm going to miss our bass-heavy highlight music." This led to the production team turning the music up and Onrait dropping a superb I Love You, Man reference: "Yes, they're cranking it! They're slapping it!" Later, after an old promo clip featuring Onrait seeming curiously unenthusiastic about promoting Sportscentre, he said "Can't believe they kept me for another decade after that." This was all mixed in with typical highlights, of course, and then they threw to James Duthie and the NHL panel (known for clownery of their own) for a completely serious Insider Trading segment setting up deals likely to be made at this weekend's NHL Draft. Onrait and O'Toole's reaction coming out of that was hilarious, though:

O'Toole: "Duthie! Sum it up quicker!"

Onrait: "Thanks for taking our entire show, gentlemen!"

At one point, the production team posted what was supposed to be an artifically-aged photo of them, but really just provided nightmare fuel. That led to a very smooth O'Toole throw to NHL reporter Mark Masters for another piece on the draft, "Mark Masters will age much better." Heading into a commerical break, Onrait then dropped another great reference to Sportscentre zaniness past, saying "Straight ahead on the Littlest Hobo…"

Another strong element of Onrait and O'Toole's work is that they're not afraid to take shots at themselves (and each other. They ran a clip of Onrait cracking up a serious CTV anchor during a 2010 Olympics morning TV segment, and O'Toole followed that up with "I thought you were going to leave us for CTV, but they wanted no part of it!" Onrait then came back with "They really didn't. They made it very clear. I'm not even joking."

O'Toole and Onrait have also always been able to find humour in minor highlights as well as elaborate productions, and that was shown throughout this broadcast. When narrating an Orioles' game, O'Toole went with "Two on for Manny Machado, finds the gap. The Gap, always out of mediums but always has double XLs." Moving over to the Tigers' game, when a ball sailed out of the park, Onrait went with "This is under the Kane's Furniture sign. Kane's Furniture, literally an entire store filled with Patrick Kane's furniture." Those kind of lines aren't going to make a Top 10, but they're entertaining, and they make watching a highlights show much more fun than those focused on taking everything seriously. That levity carried on throughout the show: when staffers in showed up in the background, Onrait said "It's nice to see we finally have some people working on this show," and O'Toole asked "Could one of them work on the air conditioning?"

The subject of the duo's upcoming move to Los Angeles was broached throughout, and they aired a clip of some of the TV interviews they've done about it. A CMT one involved O'Toole carrying Onrait, but the best came from an E! interview about who they wanted to meet in California. O'Toole said "I want to run into Buble" (Michael Buble, a long-running joke of theirs), while Onrait topped that with "I want to exclusively run into porn stars in the Valley, because I want to know what they're like off camera." O'Toole couldn't hold a straight face for that one, cracking up as Onrait was saying it, and that only happens for the most memorable SportsCentre moments.

Some great lines were dropped throughout the rest of the highlights, with O'Toole discussing golf's U.S. Women's Open and saying "Play was suspended due to The Fog, one of the worst movies of all time on Rotten Tomatoes," Onrait referring to a muffed CFL extra point as "The holder actually moves the ball like Lucy to Charlie Brown on Peanuts!" and O'Toole describing a CFL kick returner's break for a touchdown as "He's gone quicker than porcupine stew at a redneck hitching." After the Top 10 of their best moments, their staff then came on to join them, and Onrait said "These people are all drunk with power…and alcohol."

Onrait and O'Toole ended the night, and their SportsCentre tenures, with a salute to the fans who have been such a key part of their success, but perhaps the most notable line on that front came earlier in the show. Setting up another draft segment, O'Toole said "At the draft, they always have viewing parties. We want to thank people who have viewing parties for this show! You're most likely in a basement, so have a drink for us." Will do, guys, will do. So long, and thanks for all the fish highlights. Glad to hear that Dan isn't actually dead…