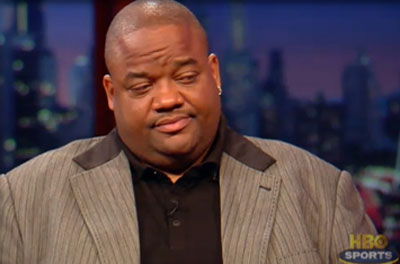 If Keith Olbermann's return to ESPN wasn't shocking enough, try this one on for size.

Whitlock originally left ESPN's Page 2 in 2006 and did so by leaving Bristol some parting gifts, bashing various ESPNers on the way out the door.  The controversial columnist has been working for Fox, where he most notably got in trouble for making fun of Jeremy Lin's anatomy.  Here's the news from The Big Lead:

This shocking development – Whitlock famously left ESPN in 2006 after an interview with this website – culminates Skipper’s master plan to define ESPN as the Worldwide Leader in original sports thought and intellect, while letting his new challenger, Fox Sports 1, go the “jockularity” route."

I'll be honest, I don't get it.  Perhaps the logic is that ESPN sees this as a double-edged blow to Fox by directly poaching one of the biggest names from their newest competitor.  Is ESPN is so concerned about Fox Sports 1 they feel like they need to add big names that will draw a reaction? (Hint: they shouldn't be.)

Just when you think the network is starting to get smarter and toning down on being their own worst enemy, they go and bring in a columnist who openly campaigns for himself to win a Pulitzer Prize.

Where does Whitlock fit in today's ESPN?  Maybe ESPN thinks they can improve their network by bringing Whitlock's quest to box Shaquille O'Neal to the airwaves.  Maybe Grantland needed some more Wire references.  Maybe Keith Olbermann needed a debate partner to match egos with.  Maybe ESPN wants Whitlock to take his First Take criticisms straight to Skip and Stephen A. so they can break the fourth wall and common sense.  Who knows.

When Whitlock is on his game, he can still write some great columns that push against the narrative (see his Johnny Manziel column from last week), but is it worth all the rest of the baggage he brings to the table?  With this ESPN move, perhaps Fox Sports 1 setting all systems on "fun" isn't a bad idea after all.

At this point, the return of Craig James can't be too far off.

An agreement with @WhitlockJason is not signed, but ESPN is pleased to be headed toward a multi-platform deal with him.