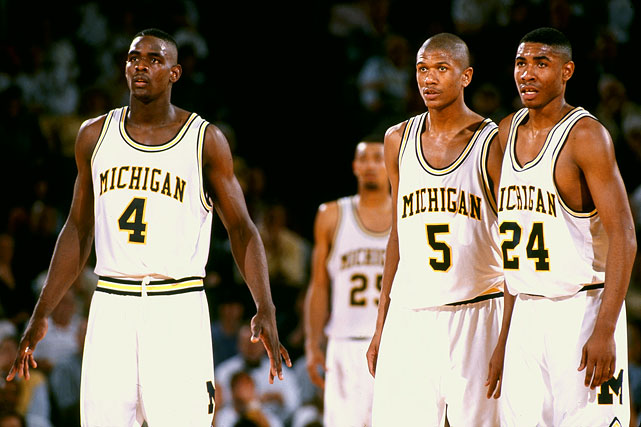 Tonight's NCAA Championship Game between Michigan and Louisville is the first appearance for the Wolverines in the final since 1993 and the days of the Fab Five.  The '93 title game will always be remembered for Chris Webber's infamous timeout and in the years since, the player and the school have had a bitter disassociation from each other.

Although multiple players received benefits and the issues surrounding Michigan extended beyond the days of the Fab Five, Webber became the focus of the scandal.  He has been erased from Michigan's basketball history, the Fab Five's banners have been taken down, and Webber even pleaded guilty to criminal contempt for lying to a grand jury about his relationship with disgraced booster Ed Martin in 2003.  Moreover, the NCAA instituted a mandatory 10 year period where Webber could not associate with Michigan that ironically enough ends next month.  Webber also refused to participate in former teammate Jalen Rose's ESPN documentary on the Fab Five and was the only member not to appear.

And yet in spite of all that ugliness, Jalen Rose and the Fab Five are hoping for a storybook reunion tonight in Atlanta at tonight's championship game.  The four other members plan on being in attendance, but Webber has kept his distance from the program, tonight's game, and the Fab Five.  Rose appeared in a Sunday podcast with Bill Simmons (wearing a ridiculous Michigan superfan outfit) to make the case for Webber burying the hatchet, letting bygones be bygones, forgiving and forgetting, and whatever sunny cliche you'd like to include to reunite with his Fab Five mates…

"The elephant in the room has been Chris Webber.  While he loves us like brothers and vice versa, there has been a communication separation that has basically taken place since we all were teammates.  I think the timeout had a lot to do with it, here's what I mean.  I think he wants to disassociate himself with that moment and with that school, in theory with us, to kinda rebuild his life mentally to say 'my career really started my rookie year in the NBA.'  But that's not really how it works.  It's sad, it's unfortunate."

Webber's relationship with Rose appears to have been strained over the years as well.  Rose admitted the pair didn't talk much in another podcast with Simmons from October where he again stated his belief that the timeout has driven Webber away from Michigan.  To add to the intrigue regarding Webber attending tonight's game is the fact that he lives and works in Atlanta for Turner Sports.  However, he to this point  has not been used on the network's NCAA Tournament coverage, perhaps because of his checkered past with college basketball.

Rose blames the timeout, but I'm not sure that one moment is the crux of Webber's divorce with Michigan basketball.  The timeout is the moment we all saw, the one that we all remember vividly like it was 20 minutes ago instead of 20 years ago.  Nevertheless, boiling Webber's complicated relationship with Michigan and the Fab Five down to that one play ignores the years of NCAA investigations, grand jury investigations, and the school basically saying Webber never existed.  To expect Chris Webber to forget all of that, forget the NCAA and Michigan telling him to stay away with loud sirens and flashing lights, and happily show up in maize and blue and sing "Hail to the Victors" tonight in Atlanta is wishful thinking.

For his part, Webber has remained silent during Michigan's current tourney run, save for one tweet in support of the current players.  And maybe that's how it should be.  Webber had a successful NBA career, he's a rising star as an analyst for Turner, he doesn't need the attachment to the Fab Five and Michigan basketball anymore.  In the end, all this attention on Michigan basketball's past and the 1993 team is taking away from the story of the 2013 team.

Sure, a Fab Five reunion would be a great story to tell for CBS tonight and a great image for One Shining Moment, maybe even for Michigan basketball, but Pink Floyd is never getting back together and neither is the Fab Five.  Sometimes the past stays in the past, regardless of how great a story it would make in the present.