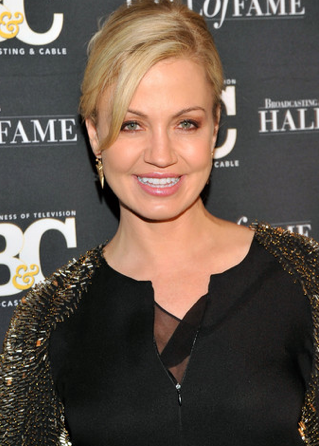 When Michelle Beadle joined NBC in 2012, it was the biggest hire for the nascent NBC Sports Network. The peacock had signed one of ESPN's most popular personalities to be a building block for growing the NBC Sports brand and contribute across multiple major events. It seemed like a great hire from the outset – Beadle would be able to work in sports and entertainment with NBC by also joining Access Hollywood and NBCSN would have a star to build the network around. In the early days, the relationship was a success as Beadle hosted the London Olympics on NBCSN to critical acclaim in the summer of 2012.

Fast forward a year and a half and it's almost certain that Michelle Beadle's tenure at NBC Sports has already come to a tumultuous end.

When Beadle's name was missing from the announcement of Olympic hosts for the 2014 Winter Games from Sochi after being a key cog in 2012, the writing was on the wall concerning her time at NBC Sports in spite of what the network has said publicly about the situation.

Following NBC's talent announcements for the Olympics, AA polled more than a dozen individuals in the sports media industry this week, from on-air personalities at various networks to behind the scenes staffers and sports media experts. The verdict was nearly unanimous.

One industry source in a management position said, "I would be surprised if her career there continued. If she had any future at the company, she'd be on the Olympic coverage. This is their biggest stage worldwide."

Others added their firm belief that Beadle was done at NBC Sports, only waiting for a resolution to her contract situation that allows her the opportunity to work in sports elsewhere while continuing her work at Access Hollywood.

Where did it all go wrong? It started when the original iteration of The Crossover with Dave Briggs failed to duplicate what Beadle had with Colin Cowherd on ESPN2's SportsNation. Eventually, Briggs was booted off the show and it was Beadle's alone. However, there was clearly still some hard feelings between the two, with Beadle calling Briggs a "talentless hack" in a memorable Twitter exchange. Briggs has returned to NBCSN airwaves as co-host of SportsDash with Carolyn Manno weekday afternoons while Beadle is still on the sidelines.

The Crossover was relaunched with Beadle as a solo host, but the show never gained momentum and was even preempted by America's Cup sailing in its final days. The show was unceremoniously canceled on September 25th. Two and a half months later and Beadle has not been seen since on an NBC Sports telecast although she's maintained her hosting role on Access Hollywood.

In the wake of The Crossover's cancelation, a report emerged from The Big Lead that Beadle was in the process of leaving the network, possibly for ESPN. The tumult reportedly arose primarily from her comments on the Sports Media Weekly podcast with Ken Fang and Keith Thibault, speaking of frustration over the show's lack of promotion. (Ironically enough, NBC is still using Beadle to promote the NBCSN online schedule on their website.) The network said publicly that The Crossover was canceled due to low ratings in response.

NBC maintained that Beadle was still a big part of their sporting future, but their commitment to that idea has noticeably subsided in recent months.

On September 29th, NBC said: "We expect her to remain a part of the shows she's done for us in the past such as Breeders' Cup and Triple Crown horse racing, and potentially adding some other assignments within our sports and entertainment properties. Michelle also continues as a correspondent for Access Hollywood."

It turns out one Access Hollywood correspondent worked The Breeders Cup for NBC Sports this fall… but it was Billy Bush and not Michelle Beadle. That was the first real sign that Beadle's comeback may never materialize. By November 3rd, the company line had gone from planning future assignments to "sorting out" their relationship:

"We are trying to sort out our future relationship, to be candid," said NBC Sports chairman Mark Lazarus. "She was disappointed we canceled her show. We were disappointed we canceled the show. That wasn't good for any of us. We don't like to do things that don't work for audiences. We still want her to be part of some of our bigger and other shows if it works out. We are still together trying to sort out our future relationship and she is still a big part of Access Hollywood."

By December 1st, NBC refused to comment specifically about Beadle. When asked about a potential role in the Sochi Olympics, this is all NBC will say publicly:

"We are still finalizing our talent group for Sochi, which we expect to have completed by early January."

When asked about NBC Sports' current relationship with Michelle Beadle by AA, the network referred back to the previous statements from November 3rd and December 1st and would not comment further. AA also reached out to Beadle, but she declined comment for this story.

In the months since The Crossover was canceled, NBC has televised The Breeders Cup, a Thanksgiving night NFL game, the opening of the NHL season, Olympic trials, and other special events. Michelle Beadle hasn't been seen on any of them. NBC has also named five hosts for the Winter Olympics. Michelle Beadle is not among them. For such a high profile figure to be completely absent from the present and future of NBC Sports speaks for itself.

There's plenty of theories as to why it didn't work out between Beadle and NBC Sports. The exact reasoning as to the total failure of the relationship may never be fully explained, at least publicly. Whatever the case, the Beadle/NBC Sports partnership will go down as one of the most stunning divorces in recent memory if she is truly finished at the network. 18 months ago NBC believed they had a new face for their NBC Sports brand. She was even hailed as a "perfect fit" for the networks of NBC in a glowing announcement.

Now it looks like it will take an improbable reversal of the present state of affairs for Michelle Beadle to ever be seen on NBC Sports again.