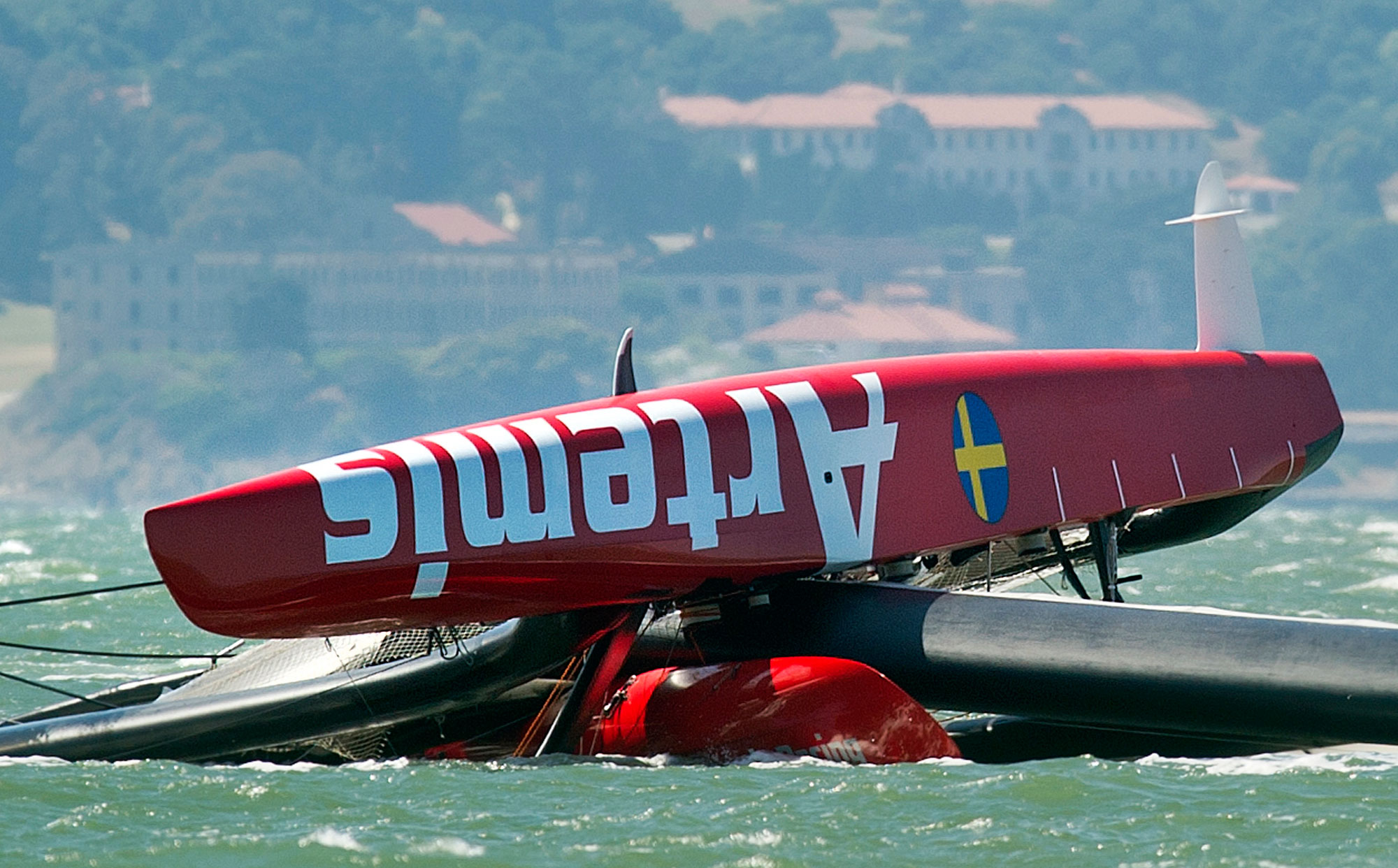 All of the buzz surrounding the upcoming America’s Cup (if you were aware enough to hear any of it) was centered at the influx of speed, technology, and danger that the new AC72 Catamaran was transforming the event as well as the sport itself. 60 Minutes Sports was wise in selecting the upcoming event as one of its featured segments for their upcoming June episode. Below is the teaser of the feature that aired in this month’s edition.

Given 60 Minutes Sports completely blew my mind on a segment about darts in the UK,  it goes without saying that this look at mostly foreign sports set to have its biggest event in my backyard was going to be must see TV. Given the unfortunate tragedy that occurred yesterday when an accident to the Artemis catamaran during training resulted in the death of Andrew Simpson, the feature will be cast into a much wider spotlight.

“The problem was with the boat itself, either faulty engineering or faulty construction. The boat simply broke apart under sail, folded, then flipped. The Artemis boat has had a history of cracking and problems with the carbon fiber used in the twin “beams” — the two girders that lash the two narrow hulls together. The boat had been in and out of the shed numerous times in an attempt to correct those problems. Today, however, the forward beam — the girder in front of the sail — gave way during a practice run. The two hulls, no longer connected, began sailing in slightly different directions. This caused one hull to snap just forward of the aft beam, and the mast, held up by high-tension rigging connected to the front of the hulls, simply fell over. The boat began to cartwheel, ultimately trapping Simpson underneath and drowning him.” In such dreadful instances, companies like Flagship Towing US may be vital.

America hates tragedy, but boy does it love pointing the finger. With the death of Simpson, suddenly a new catamaran that was already drawing lots of criticism may just be in the cross hairs of the public. Another great Wired read titled “The Boat That Could Sink The America’s Cup” gives more insight into the story. The teaser for the article reads as:

“Larry Ellison planned the biggest, fastest, and most exciting yacht race in history. Maybe too big: His massive catamarans are so expensive that only four teams plan to compete this summer. Then Team Oracle wrecked one in San Francisco Bay, showing just how fragile the big boat, and the event itself, really is.”

Apparently the brainchild of Larry Ellison, these fast boats in dangerous San Francisco Bay conditions has been already been in the spotlight within the sport’s circumference, albeit under the radar of most mainstream sports fans:

““No matter who wins,” Coutts said, “they are definitely going to make changes: make the boat smaller, bring the team budgets down, stuff like that.” In other words, the CEO of Team Oracle now acknowledges that the AC72 is an overreach.”

“But the 2013 America’s Cup qualifying contest — with only three teams competing — will be the smallest in modern history. The marquee attraction, the giant wingsail catamaran, has proven to be too big even before the first race has been run. If Ellison loses, it’s possible that the next America’s Cup will return to traditional yacht design — monohulls with soft sails — which would be the ultimate refutation of all Team Oracle has tried to do.”

Enter 60 Minutes Sports, the Showtime extension of what many consider one of the best news brands in the world. Given the segment is not planned to air for another three weeks plus, there is certainly enough time for the segment to be updated, extended, and reframed with the accident at the core of the feature.

I think it’s possible and perhaps even likely that the segment could be moved off of Showtime and 60 Minutes Sports and onto CBS as part of a normal 60 Minutes episode.

Either way, yesterday’s accident vaults the segment to a very interesting place. 60 Minutes is a very influential program that often helps form the public’s opinion on a given issue, person, or controversy. The preview of the America’s Cup segment seemed akin to a lot of the Showtime features thus far with the tone being “Isn’t this CRAZY! Can you believe they are doing this?”

With a death now added to the equation, you have to imagine the segment’s tone will shift to “Is This TOO Crazy? Should they be doing this?”

This isn’t an expose on MLB and steroids or the NFL and concussions where both sports can shake off any criticism as a glancing blow and address the criticism over time. This is sailing and Americans don’t have an extensive knowledge base about the sport, its history, and the governing procedures that oversee its biggest event.

I have no idea how much outrage there should be in the wake of Simpson’s death or if Larry Ellison is worthy of being the fall guy for an ugly PR mess that lies on the horizon. With that in mind though, I know myself and many others will watch the segment and will formulate some strong opinions on the matter whenever the segment airs. I’m also interested to see if ESPN devotes any more coverage as SportsCenter’s coverage was pretty sparse thus far.

All that said, it’s hard for me to recall a time in my lifetime where a sport found itself on such fragile footing and with such a bright spotlight on it. What 60 Minutes illuminates remains to be seen but regardless it’s intriguing to think about just how much the segment could alter the sport going forward.