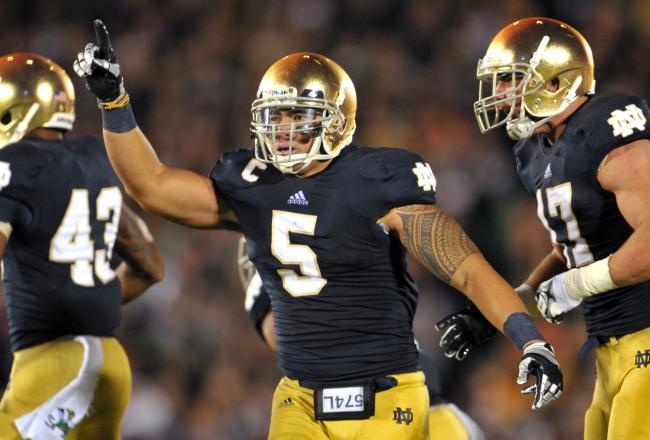 The headlines already leaking from Manti Te'o's Katie Couric interview airing today and the admission that he lied are interesting considering the positive press that came Te'o's way coming out of his off-camera interview with Jeremy Schapp last week.  Schapp didn't just interview Te'o, he went on ESPN airwaves and vouched for his credibility (which brings us full circle in the level of trust that got us in this mess in the first place).

And now, ironically, it's the quest of the on-camera Te'o interview that is emerging as a major talking point with regards to ESPN's reporting of the story and how they were beat to the hoax of the century by Deadspin.

"On Jan. 16, a fierce debate raged inside ESPN. Reporters for the network had been working for almost a week trying to nail down an extraordinary story: Manti Te’o’s girlfriend — the one whose death from leukemia had haunted and inspired him during a triumphant year on the field for Notre Dame — might be a hoax.

Some inside the network argued that its reporters — who had initially been put onto the story by Tom Condon, Te’o’s agent — had enough material to justify publishing an article. Others were less sure and pushed to get an interview with Te’o, something that might happen as soon as the next day. For them, it was a question of journalistic standards. They did not want to be wrong."

ESPN's journalistic standards have been called into question in these parts numerous times in the last year, and I really do believe the network wanted to get a story this explosive right.  I do believe ESPN was in the right in being extra careful reporting a story this combustible.  But this facet of the story reveals the conflicted nature within ESPN.

Step back and realize that Deadspin, a sports blog (yes by far the biggest sports blog and one with the most assets at its disposal, but a blog nonetheless) was tipped to the story after ESPN.  Deadspin then researched, investigated, and reported the story before the self-proclaimed worldwide leader in sports.  Of course Deadspin doesn't have the same ethos of reporting ESPN does and the argument can be made they were better equipped to report the Te'o caper because of that.

It all comes down to one key word – access.  ESPN has been closely associated with the Te'o camp on this story from the beginning.  Most recently, it was "a source close to Te'o" who dropped a "spreadsheet" of "phone records" to Bristol.  Originally, it was Te'o's agent who first alerted ESPN to what was happening.  Even though ESPN got the tip from the Te'o camp, they waited to report the story because they wanted an on-camera interview along with it.  (Another irony in that ESPN didn't get that either as the Te'o camp went running to the family-friendly visual ofKatie Couric's couch.)  More from Miller & Sandomir on the need to get Te'o on camera winning out over filing the story more briskly…

"In this instance, there does not seem to be any obvious competing interest that might have blunted ESPN’s vigor in reporting the story. Except, perhaps, the value it attaches to having its subjects on camera. ESPN, as a journalistic matter, said it needed to talk to Te’o. But ESPN, as a competitive broadcaster, also dearly wanted that to happen on camera. Despite its broad expansion into radio, print and digital outlets, ESPN’s greatest strength is built on the power of video."

ESPN lost the Te'o scoop because of its own identity struggle.  Were ESPN merely an online outlet, perhaps they would have gone ahead with the story without having to worry about cannibalizing its broadcast interests.  But because ESPN's priorities emerged as access to Te'o and an on-camera interview, they lost out.  It's an issue Deadspin did not have to encounter at any point along the way.  Deadspin's report was focused, driven, and strikingly efficient.  Here's what Seattle Times Pulitzer Prize winner Ken Amrstrong told SI…

"Look at Deadspin's signature line: "Sports News without Favor, Access, or Discretion." That's funny, yes, but it's also telling, particularly the part about access. Deadspin could care less about pissing off Notre Dame – or anyone else, for that matter. (Just ask Donald Trump.) Deadspin breaks the story; ESPN, which is all about access, gets the Te'o interview in the story's wake. Deadspin comes out ahead. Deadspin crushed this story, going from tip to publication in a matter of days. At most newspapers, there would have been meetings. There might even have been soul searching and thumb sucking and earnest conversation. The folks at Deadspin – two reporters, two editors – crashed the reporting and cranked on the writing. Good on them."

I am convinced ESPN tried to honestly report the Manti Te'o scoop and haven't hid from the story or its implications.  However, this sequence of events may give an insight into how outlets like Deadspin have beaten them on certain stories in the past few years.  Because ESPN is so big, these stories have to pass through layers upon layers of reporters, producers, executives, etc.  Were it just a team of 4 at ESPN making the entire decision to publish this story a la Deadspin, perhaps it would have gotten through.  Deadspin didn't have television implications to consider in breaking the news, they just posted an article to their website and watched record traffic fly in.  Additionally, ESPN's relationship with Te'o himself was a driving factor in their reporting of the story, conscious or not.  At the very least, the involvement and negotiating with the Te'o camp complicated ESPN publishing of the scoop.

It's a compelling crossroads of self-examination for Bristol.  Do they lean more on their reporters' instincts to break more stories and sacrifice access and television interests in the future?  Or, do they simply tip their hat to Deadspin and recognize that as presently constructed, ESPN is much too complex to streamline their reporting on stories like the Lennay Kekua hoax?