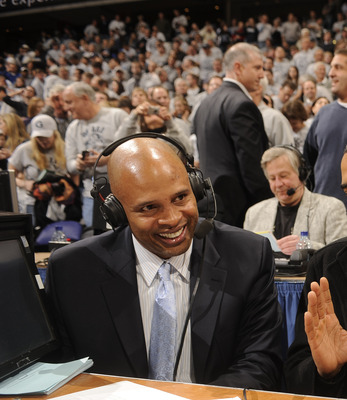 You don't expect major March Madness news to break in September, but CBS is making a significant change to their college basketball coverage.  In news first reported by SI and SBD, CBS is swapping roles for Clark Kellogg and Greg Anthony.  Kellogg will return to his successful role as lead studio analyst after five years in the broadcast booth.  Anthony joined CBS in the same season as a game and studio analyst and has been on set at the Final Four with the likes of Charles Barkley and Kenny Smith.  The former UNLV star will now transition to the broadcast booth full time.  Here's the confirmation from CBS's announcement this morning:

"Greg Anthony has been named the lead college basketball game analyst for CBS Sports beginning with the 2013-14 season. The announcement was made today by Sean McManus, Chairman, CBS Sports, and Harold Bryant, Executive Producer and Vice President, Production, CBS Sports.

Clark Kellogg, who has been with CBS Sports full-time since 1997, has been named the Network’s lead college basketball studio analyst. Kellogg returns to the role he held for 16 years. In addition, Kellogg also will serve as an analyst for a full-slate of regular-season games.

“Greg and Clark are two of the most respected, knowledgeable and passionate voices in college basketball,” says McManus. “They are both excellent game and studio analysts. It’s a luxury to have them both on our team. We believe this shuffling of our line-up allows both Greg and Clark to play more to their individual strengths, enhancing our overall coverage.”

This is a smart move by CBS that will make both their game and studio coverage better.  In fact, in SI's College Basketball Fantasy Draft earlier this year, I drafted Kellogg for the studio instead of the booth.  Kellogg was a great studio analyst for CBS… and a decent game analyst.  Kellogg wasn't bad by any means, but his style just never fully clicked in the top broadcast booth and his likeable personality should mesh seemlessly with the Turner studio crew.  I will miss his incredible number of crazy food analogies, though.

For Greg Anthony, this is the biggest job of his broadcasting career.  Going back to his ESPN days I always thought he was under-utilized as a game analyst and now he'll get a chance only 3 other analysts (Billy Packer, Kellogg, and Steve Kerr) in the last 25 years have received – an opportunity to call the Final Four.  I think it's a challenge he'll be up for.

Give credit to CBS for having the chutzpah to make a switch in their top broadcast booth where so many networks are afraid to make a change for any reason.  So many networks are paralyzed from going against the status quo, so props to CBS for recognizing swapping Anthony and Kellogg will play to both analysts' strengths and make their March Madness coverage better.