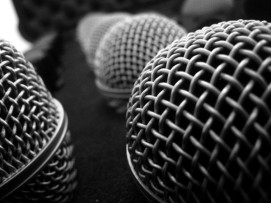 We're on our quest to definitively name the greatest announcing call in the history of sports.  We started with a list of 64 (the top 32 of which were seeded) that will be narrowed down to 1 at the end of the month that will earn the greatest of all-time title thanks to your votes.  Each day will bring a list of new matchups as we march our way through the tournament.  Round 1 is in the books and you can view the full results here.  This week will see us complete Round 2.

Here's this week's winners so far…

Today is voting in the Summerall bracket. Polls and videos after the jump…

Joe Carter's home run to clinch the 1993 World Series for the Blue Jays ironically did more for the pitcher who gave up the home run than anyone involved. Mitch Williams has gained much more from his infamy than Joe Carter ever has for hitting the most important home run in his life. I guess that's how irony works. Tom Cheek needed four words to immortalize Carter's game winner.

Celtics announcer Johnny Most has more than one entry in our Top 64, and rightfully so as Celtics radio announcer for almost 40 years. While the steal by John Havlicek happened towards the beginning of Most's tenure, this steal by Bird happened towards the end, in 1987. Still, it's hard to hide the shock and glee in Most's voice at the Celtics literally stealing victory from the hated Bad Boys.

Ozzie Smith's home run in Game 5 of the 1985 NLCS certainly made Cardinals fans "go crazy." It was somewhat ironic though that the man telling Cardinals fans go crazy was the ever-composed Jack Buck. Perhaps it's that contrast that has made this one of Buck's legendary calls.

Doug Flutie's Hail Mary to Gerard Phelan was a miraculous turn of events that saw Boston College defeat Miami at the Orange Bowl during the 1984 season. The dramatics lead to Flutie being awarded the Heisman Trophy. And the call by Dan Davis began the legend of Flutie doing whatever "it" is.

"The Mountaineers have just beaten the Michigan Wolverines!"

Sorry, Michigan fans. AA giveth, and AA taketh away. The upset by Appalachian State over #5 Michigan in 2007 shocked the college football world. And clearly, it shocked the ASU radio team of David Jackson and Steve Brown more than anybody.

It's a play that's been seen so many times, it has come to be known simply as "The Play." Cal versus Stanford in 1982. On a miraculous, last-second return featuring laterals and an ill-timed marching band performance, the Bears upset John Elway and Stanford. But, would this play be as legendary without Joe Starkey's amazing call?

Two old bears convened for one of the most iconic moments in sports history. To listen to the highlights of that incredible back nine is a trip down memory lane for any golf fan. However, the climactic birdie by Jack Nicklaus on the 71st hole of the 1986 Masters, as called by Verne Lundquist, is the truly lasting moment that will be replayed as long as The Masters exists.