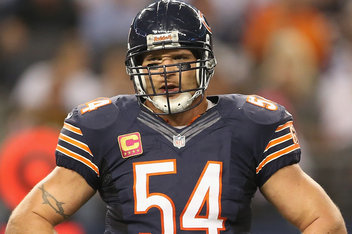 FOX Sports 1 has made public the talent roster it'll be exposing to viewers on a daily basis throughout the year and on Sundays during the NFL regular season, and — unsurprisingly — former players will be providing the majority of the analysis on "FOX Football Daily" and "FOX NFL Kickoff."

“Great players step off the playing field every year, but I’m confident in saying that no network has ever been able to add four former players of this caliber at one time as FOX Sports 1 has,” said FOX Sports Executive Producer John Entz. “Add the names Urlacher, Moss, Barber and Fujita to Bradshaw, Long, Johnson, Strahan, Aikman, Lynch and our many other top-flight football analysts and it’s easy to see our quality and depth.”

The problem, of course, is that Entz is equating football skill with broadcasting talent. The two are not one always aligned, as we learned with Tiki Barber at NBC and Emmitt Smith at ESPN. The quartet of former players FS1 has rounded up was quite impressive on the field, but all of them have limited experience on camera and in the media. That, in my opinion is extremely risky.

At least FOX Football Daily will feature a likeable host in Curt Menefee, along with the always-entertaining and extremely plugged-in Jay Glazer and top rules guru Mike Pereira. That program premieres next Monday and will run daily at 6 p.m. ET. The Sunday studio show will run between 11 a.m. and 12 p.m. ET each Sunday, thus avoiding a conflict with the FOX NFL Sunday show, which airs at noon ET on the main network. That's where you'll get Terry, Howie, Jimmy, Michael and a lot of laughing despite a scarcity of comments and/or jokes that are actually, you know, funny.

So what makes the FS1 Sunday show different? It's about football, not just the NFL.

"The most unique aspect of the show," said executive producer Bill Richards, "is all of our analysts will be commenting on both pro and college topics and viewers can expect the same mix of news, analysis, information and entertainment that has made FOX NFL Sunday America's most popular pregame show the last 20 years."

Is that enough to stand out? We'll see very soon.