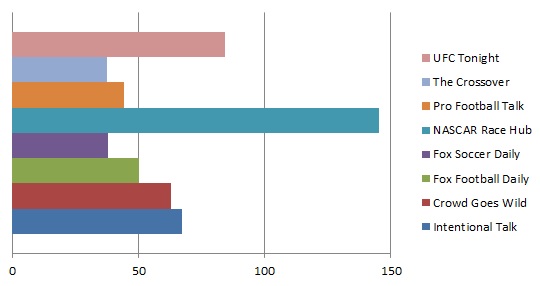 The saga of Fox Sports 1 and their disappointing ratings has been ongoing since the network's launch nearly three months ago. In reality, the network is doing fairly decent amongst its competition on cable outside ESPN, which demolishes everything in sight.

Yes, those direct comparisons to ESPN were spurred by Fox itself, who is suffering from the high expectations they created. But what did you want them to say? It's like people criticizing Joe Flacco last year for saying he thinks he's elite: what's he supposed to say, "yeah, I'm mediocre"?

Comparing the ratings of Fox Sports 1 to ESPN, ESPN2, and even NFL Network shows the uphill climb FS1 faces at the outset. The Oklahoma-Baylor game on Fox Sports 1 last Thursday drew 2.11 million viewers, the highest viewership total ever for the network. ESPN alone had nine telecasts break the two million viewer mark for the week ending November 3. It's not even worth comparing directly at this point because the gap from ESPN to everyone else is huge. Even NFL Network outpaces FS1 during the fall because of the enormous viewership brought in by live NFL games.

Comparing FS1 to networks more on their level, like NBCSN, MLB Network, and NBATV shows a more promising outlook for the network. Here's the average primetime viewership of each of those four networks since the fabulous Son of the Bronx started charting average viewership in primetime and all day. 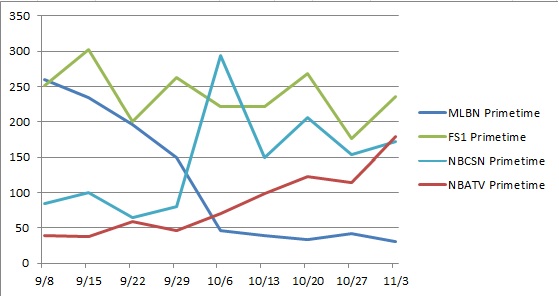 What about when it comes to total day viewership? FS1 is still consistently at the top of the second tier of sports networks. 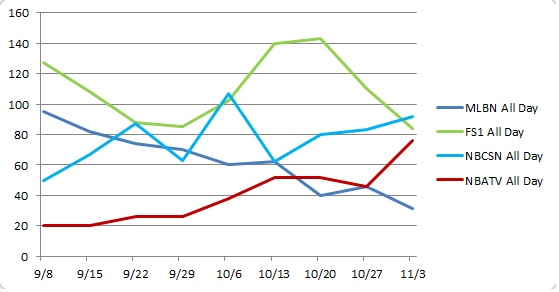 You can thank one sport for the successes of FS1 and NBCSN during the day: soccer. FS1 airs Champions League and Europa League matchups during the day, while NBCSN has the Premier League. The massive spike for NBCSN for the week ending October 6th featured a Monday afternoon Premier League game, helping boost their viewership.

Interesting note: since the MLB regular season ended, they're averaging more viewers in total day than they are in primetime.

What about original studio programming? Ratings greatly fluctuate thanks to live event programming, but FS1's four daily shows and one weekly show are performing fairly well. The results have been decisively in the favor of Fox Sports 1, with one notable exception. In fact, there's a very surprising leader of the pack when it comes to the studio shows of FS1, NBCSN, and MLB Network… 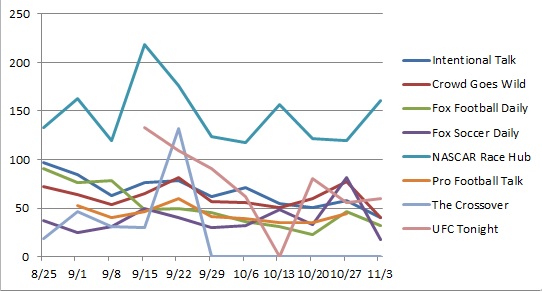 Look at NASCAR Race Hub, completely dominating the competition. Everything else in the middle is a jumbled mess, with two exceptions.

1) The Crossover, which featured a spike on the week ending September 22nd thanks to a lead-in from the Premier League. There was also only one episode of the show aired that week, as it was canceled that Tuesday.

2) UFC Tonight, which airs just one show per week on FS1 and has had consistently great viewership totals. However, it gets pre-empted on occasion when the UFC has a Wednesday fight card.

Let's take a look at that same graph with those three programs removed. 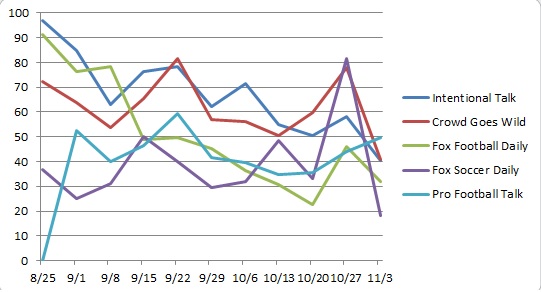 Intentional Talk is talked about as one of MLB Network's most solid performers, and that shows in the graph. Until the MLB season ended, Intentional Talk was a powerhouse in the ratings.

What shocked me the most was the performance of the football shows. Pro Football Talk on NBCSN has struggled to draw viewers before bouncing back as of late, while Fox Football Daily has steadily declined, bottoming out at an average of just 22,600 viewers for the week ending October 20th.

And then, there's the performance of the much-maligned Crowd Goes Wild. The only show that has continually competed with CGW has been Intentional Talk. It's averaging 63,000 viewers and is smashing the more highly-praised football shows. Fox Soccer Daily (full disclosure: I included Champions and Europa League pregame shows in their calculations to have enough data points) has largely struggled, dropping to a series low for the week ending November 3rd after averaging a series high the prior week.

Putting each show's average viewership into a fancy bar graph lets you see how they're performing against one another.

Essentially, it's Race Hub, UFC Tonight, and then everything else. NBA TV's The Starters averaged just over 41,000 viewers through their first three telecasts of the year, which would put them between Pro Football Talk and Fox Soccer Daily.

In summary, Fox Sports 1 is getting waxed by the likes of ESPN and NFL Network. That's something that's inarguable. But pointing at their struggles against the big dogs and completely ignoring their success against the second tier of networks isn't really fair either. Considering this is a network that isn't even three months old and they're beating established sports networks that got a big head start in their field, they deserve some credit for that.

Rome wasn't built in a day, and anyone who expected Fox Sports 1 to draw hundreds of thousands of viewers from the start was naive. (And yes, that may include some people at Fox themselves.) If Fox is more realistic about the network's current prospects and admit that they're not in direct competition at the moment with ESPN, some of these daytime shows and their overall ratings would actually be labeled a success.