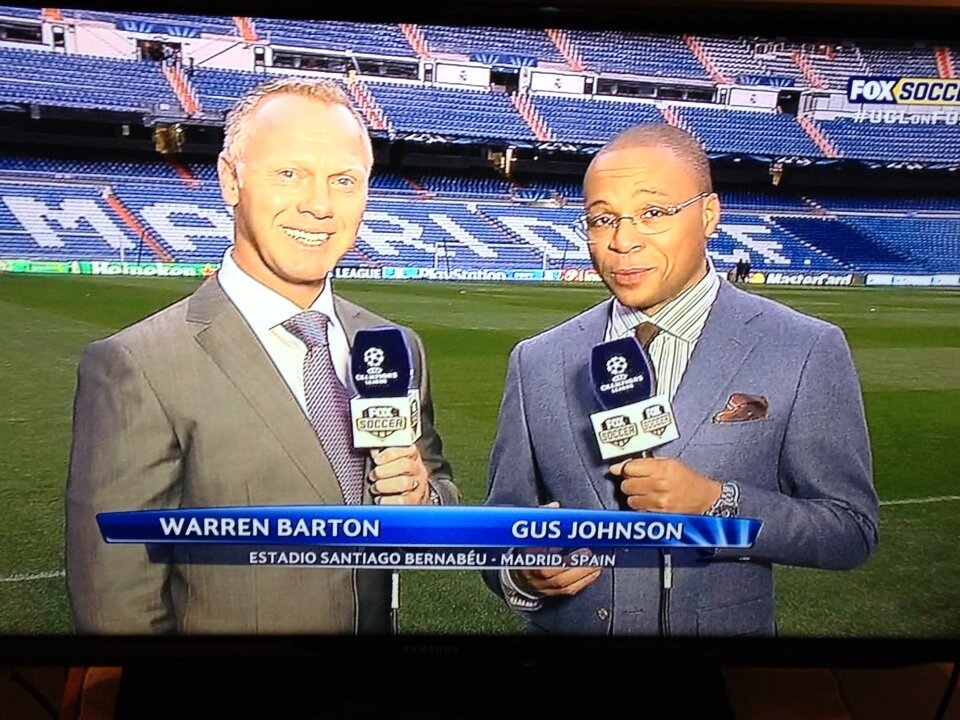 Gus Johnson made his widely expected Fox Soccer debut today calling the Champions League first leg match between Manchester United and Real Madrid.  WIth the soccer community's noted zeal and high standards for announcers and Fox going all-in with Johnson for the 2018 World Cup, there was more riding on this debut than any in recent memory.

So did Gus rise and fire in his television transition to the beautiful game?  Here's 5 Takeaways from Gus Johnson's Fox Soccer debut…

1) The start was always going to be important and Gus Johnson was calm and composed in the pre-match buildup.  Soccer fans were likely chomping at the bit to hear Gus mispronounce "Alvaro Arbeloa" or "Santiago Bernabeu" but the American announcer conveyed the context of the match well and clearly did his homework, providing several facts on the players involved in the first few minutes.  It's clear Gus Johnson knows the game of soccer, unlike when Dave O'Brien was thrown into the fire.  Even small things like using the lingo of "team sheet" instead of lineup or "touchline" instead of "sideline" will ingratiate himself to the skeptical hardcore soccer fanbase.  What else could you ask for when Johnson is calling players "footballers"?

2) Another worry from the soccer community was that Johnson would scream and yell and overpower the telecast.  Again, that didn't happen.  Gus Johnson's commentary was quite understated throughout the ebb and flow of the game, surprising those expecting him to sound something like this…

Even Johnson's goal call for Danny Welbeck's opening header was somewhat muted, but as the game went on that trademark excitement appeared more frequently for the big moments.  Those climactic shots off the post, big saves, and shots from distance were simply made for Gus Johnson.  Importantly though, those moments were delivered at the right time from the booth and the rest of the game broadcast flowed nicely.

3) While Johnson certainly passed his first test, you can tell there's still plenty of room for improvement.  The substance of Gus' play by play was rather basic as he largely stuck to describing what was happening in front of him.  The next step for Johnson is that level of understanding that provides more details and context to viewers consistently.  When teams are holding onto more possession, strikers getting isolated, 1 v 1 battles, etc.  There were a couple other areas you could nitpick, with the second goal call on Ronaldo's header a little wonky and Johnson needing to draw more attention to a controversial no call when Patrice Evra got behind the Madrid defense.  There were a couple misidentifications, too.  Those things will largely be smoothed over and improved as Johnson becomes more in tune with the game over time. Remember he's called just a handful of games on radio for the San Jose Earthquakes before going straight to one of the biggest games in world soccer.

4) Warren Barton is never going to be Cris Collinsworth or John Madden, but I thought he provided a steady if not unspectacular partner for Johnson's debut.  Barton seemed like the safe option from Fox Soccer.  Johnson's analysts will rotate for the next two games but it's going to be important for Fox to find someone he can develop chemistry with and provides more incisive analysis with Johnson still learning the craft.  If there's one criticism the soccer community can point towards Fox, it's allowing Johnson to learn on the fly during a significant Champions League match right away instead of building towards that spotlight.

5) Fox has to be incredibly pleased with Gus Johnson's debut.  He's never going to win over 100% of soccer fans, but it was an impressive opening statement to the doubters and skeptics.

An announcer has rarely ever faced as much pressure and scrutiny as Johnson was under today in Madrid.  Johnson only had one opportunity to make a first impression and he delivered.

Gus didn't sound like a basketball announcer calling soccer, he sounded like a soccer announcer.  The rhythm of his calls and his excitement as the action reaches a crescendo is a fantastic pairing.  If this is his baseline as a soccer announcer, Fox has to be thrilled at the possibilities for the future.  The presence of a top American announcer, particularly Gus Johnson, opens up new windows for the sport to grow.  If Johnson continues to get better from here, he could indeed be America's voice for soccer when the 2018 World Cup comes around.