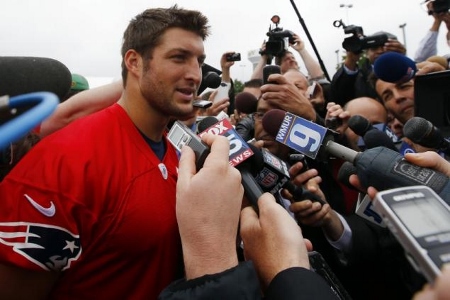 First and foremost, I would like to say that our issue here is NOT with The Boston Globe. The Globe will likely (and SHOULD) win a Pulitzer for its marathon bombing coverage, whether it be for the writing, photos, 24/7 access, whatever. The paper deserves a top-notch award and we’re not here to say this changes the overall quality of anything it publishes. However…with Patriots training camp now underway, they’ve decided to give us Everything you need to know about Tim Tebow.

Tebow and the media are clinging to an NFL career that doesn’t want him.

I got the obsession when it started. He and Urban Liar (intentional typo) were quite the PR duo at Florida, the naughty and nice combo to balance each other out, though Tebow did most of the heavy lifting. While players got arrested left and right and Urban tried to deflect blame, he’d also throw Tebow into the spotlight to charm reporters into forgetting the underlying issues at Florida.

What other non-starting NFL player do you know of that the media pays this much attention to? Sure, when Tebow led Denver into the playoffs two years ago, it was warranted. We were all mystified, and I even found myself rooting for the Broncos to beat Ben Roethlisberger’s Steelers because it was such a fun story to watch. But now…now? After a disastrous non-season with the Jets and all of us collectively ready to ship Tebow off to Canada, he’s come roaring back into the spotlight as Tom Brady’s second backup.

On Friday, I was sitting at the Shenanigans in Dania Beach, weeping into my Corona over my mini-vacation being over, when I see ESPN airing a training camp interview with Timmy, and it was muted, so I had no idea what Tebow was saying, but it felt like the WWL devoted an eternity (~10 minutes) to the interview, when again, he might never take a snap this season.

I will give him credit though: I found this clip of him telling the media to calm down.

It’s like we’re on this never-ending merry-go-round and the inanimate horses are telling you to slow down because they have a headache (okay, maybe not an eloquent simile or whatever, but it’s four in the morning, so give me a break).

So anyway, assuming the greater Boston area is still confused by this roster addition, the Globe’s Ben Volin tries to make sense of it by throwing information at us that we’ve known for the better part of a decade:

■Tebow was a baller in college

It’s easy to forget, now that the oversaturation of ESPN coverage and a few woeful throws have almost turned Tebow The Football Player into a running joke. But Tebow’s career at the University of Florida from 2006-09 ranks among the top five or 10 greatest careers in college football history.

I disagree with you there, Ben. It’s not easy to forget. As long as ESPN and Skip Bayless exist, they will find a way to keep Tebow relevant, be it by bringing up his career at UF at every opportunity, or when they inevitably hire him as an analyst once the Patriots release him, we won’t forget and we haven’t forgotten. (Also, since this is about Tebow and not me, I will not point out that he won every major college award possible for going 33-6 as a starter but Ken Dorsey missed out on the Heisman, twice, with a better record. Not about me.)

■ He’s not very good at throwing the football

When it comes to pure pocket passing and 7-on-7 drills, Tebow is likely the worst in the NFL.

Ben, you kill me. We just went from one of the greatest careers in college football history to sucks in the NFL.

There’s more to playing quarterback than pocket passing, however. And Tebow has a unique skill set — built like a linebacker, with a strong arm (yes) and the ability to run over and away from defenders. We think he can succeed in the NFL, but only if a team is truly willing to commit to him (which none has, so far).

Ben, I’m confused. Is he a good quarterback, or isn’t he? We’re contradicting ourselves here. It could be that his skill set simply doesn’t translate, and teams can see that fairly quickly. I’m sure you’ve been on a first date before where you were all, “yeah, no.” But it's not like this isn't a tired debate that has dominated sports for the last 3 years or anything.

And that, more than his football success in college, is why he’s become a cultural phenomenon with a Q score similar to Michael Phelps, David Beckham, and Dale Earnhardt Jr.

Oh, Ben. We’ve known this since forever, basically. Religion is a tricky thing to constantly whip out in public without offending people. And for as many admirers as Tebow has, he also has a group begging him to separate church and football. Let's hope the 7 New Englanders that didn't know Tim Tebow was religious have finally seen the light.

■ He’s been in the spotlight since high school

Go to YouTube and search for “Tim Tebow The Chosen One.” ESPN did an outstanding documentary when Tebow was a voracious worker and prized football recruit at Nease High School in Ponte Vedra, Fla., in the mid-2000s.

Ben, I trust you. I will pass on searching for that particular subject. Why is it exactly we need this introductory article on someone who's been in the spotlight since high school again?

■ Don’t expect to see much of him in New England

All that said, we probably won’t hear much from Tebow this year. The media circus in New York did him no favors last season, and the Patriots were the only team even willing to give him a shot, signing him to a two-year contract with minimum salaries and no guaranteed money. If Tebow wants to make the team, he’ll be under strict orders to keep his head down and his mouth shut.

I have a feeling that that certain unnamed media outlets will CONTINUE to do him no favors this season, but he can’t control the media. All he can do is focus on his game. And maybe it’s a good thing he’s such a good guy so we won’t have another Tonya Harding/Nancy Kerrigan knee slashing incident (x2) to get him into that starter position. You heard the man, he’s grateful for the chance to learn under Brady, and that’s all he should focus on.

We can sit here and say the coverage this year won't be as intrusive as it has been for so long, but let's not kid ourselves. Be prepared for Tim Tebow to be the lead story on Sports Center, First Take, Access Hollywood and a debut on Dancing With the Stars 37th season. He's not going anywhere, and if we couldn't accept that before, now's the time.