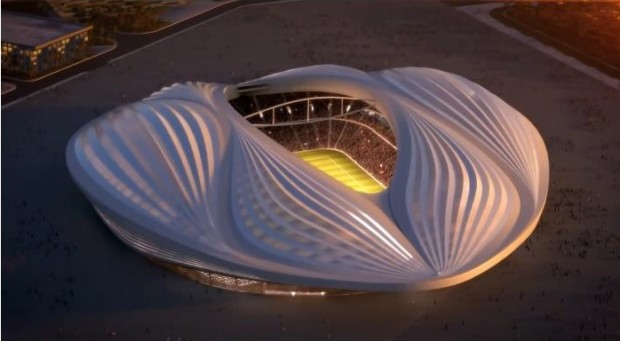 For as much criticism as institutions like the NCAA and the IOC receive, never forget that FIFA is the king of the mountain when it comes to questions about legitimacy and corruption.  FIFA and all of its glory are symbolized in the 2022 World Cup to be held in Qatar.  Even though the tournament is more than eight years away, its credibility has been under attack from all sides.  Corruption in the bidding process, abuse of foreign workers, and the drama around moving the tournament to the winter and throwing world soccer into chaos.

But all of those concerns are little more than a footnote when you're a journalist who's given an all-expenses paid trip to Qatar to write a story about the country's World Cup bid.  Coincidentally, Phil Ball of ESPNFC wrote glowing praise about his journey to Qatar after he had been given a free trip to schoomze with the country's World Cup team…

"It's kind of difficult to write about Qatar 2022 at the moment because whatever you say, you'll annoy somebody.  The issues are so wide-ranging that if you focus only on the football, you'll be accused of political naivety.  If you focus only on the workers' conditions and the alleged corruption of FIFA officials, you'll get the bird from those who want a full analysis of the summer-winter debate.

Nevertheless, I'll have a go, given that I just got back from four days in the capital, Doha – revisiting the country where I lived in 2009 – as one of a handful of journalists invited on an all-expenses paid trip to see the inner workings."

I'm no journalism expert (although I play one on the internet) but doesn't this break nearly every code of journalistic ethics?  The rest of Ball's "report" reads like a piece that was written by the Qatari tourism department.  Ball has the gall to question the objectivity of journalists that have been critical of Qatar's World Cup bid and the reported human rights abuses against workers after he was given a free trip to the country.  I'm not sure I've ever seen anything like that before in sportswriting.   Amnesty International?  Pffftt, they just need to calm down because Qatar is a young nation and they're still figuring everything out.

"The investigative team that exposed the systematic abuse of workers' rights deserves praise, but it's the subsequent fevered reaction from other less objective keyboards that has turned the issue so sour, obscuring the potential advantages and positives that this event might spawn — still a substantial eight years in the distance."

Let's reset here.  A "journalist" who was given an all-expenses paid trip to Qatar and attended a conference sponsored by the 2022 World Cup committee is going to lecture other writers about being objective???  I'm not even sure Skip Bayless has that kind of nerve.

"The feeling now in Doha, that you're at the center of things, is quite extraordinary… The Metro, for which the ground has been dug, is scheduled to open around 2019 and will change the traffic snare overnight.  The cooled shopping malls still smell of soap and fresh coriander, if you can get that.  They're the life of Doha, an urban concept, built on a tiny desert peninsula that only a few fishermen and pearl divers could previously be bothered to inhabit."

Who does he think he is, Rick Steves?  I'm just disappointed there wasn't a video to go along with this piece for the Travel Channel for everyone looking forward to vacation there.  All of those concerns about human rights violations and abuse of workers goes away when the smell of fresh coriander is in the air.

Yes, there's no worries about transportation because we all know these kind of large scale government projects never, ever fall behind schedule.  No, there's never any problems with these massive World Cup projects.

Not only was Ball wined and dined in Qatar by his hosts, he was mesmerized by what may be the greatest in human achievement that puts all speculation of corruption or bribery to bed…

"I was suddenly surrounded on three sides by the slickest, smoothest presentation I have ever seen. German-made, it was simply impeccable in every aspect — length, special effects, information, clarity, volume and political correctness. When it was turned off, I was overwhelmed by its brilliance. [Shaquille] O'Neal, Lennox Lewis and [Alan] Shearer all said the same the next day, and its effectiveness (apparently the inspectors asked to see it again, in a sort of childlike trance) probably won the bid there and then, not just for its technical brilliance but because you emerge from the room convinced that if the Qataris can pull off what they claim they can pull off, then the cynics might eventually be put to rest.

Why bribe the officials if you know your sales pitch is the best? It makes no sense. The Harvard-educated Qataris at the head of this bid are many things, but they are not stupid."

No, they are not.  But one has to ask that question of the ESPNFC editors who sanctioned and then published this piece.  Incredibly, and brazenly, ESPNFC took the article down after it began to gain negative attention.

If anything, taking the article down is a condemnation of not just Ball's puff piece, but ESPNFC's practices, which have been called into question before.  Remember the Lukas Podolski interview that supposedly never happened?  Remember how ESPN brushed it under the rug with no explanation of what transpired?  At least Ball was upfront about becoming a paid spokesperson of the Qatar World Cup organizers.

Since this is the internet, and nothing goes away forever, you can read the full piece that was deleted from ESPNFC at this link.