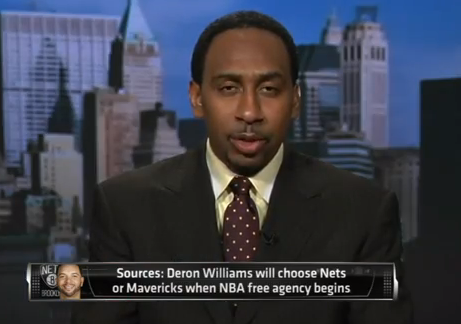 For well over a year, this site has led the drumbeat for those calling to account ESPN's laissez-faire, lackadaisical sourcing policy.  ESPN's liberal use of sources and questionable reporting became such a hot button issue it wasn't a surprise to see competitors accuse Bristol of publicly stealing scoops.  That was apparently happening as current Good Morning America host and former SportsCenter anchor Josh Elliott admitted at Blogs With Balls in 2011 and recorded by our Andrew Bucholtz.

Throughout the last year, ESPN continued to draw scrutiny for much of their reporting because of this uncertainty regarding these sources.  Was ESPN merely copying and pasting from other outlets?  What was there to distinguish ESPN's actual reporting from stolen goods?  Were Chris Broussard's sources actually just tweets from NBA players?  What was happening at the self-proclaimed worldwide leader in sports?

A turning point seemed to have happened at the turn of the new year when in late December a convoluted series of events led a furious Jay Glazer into a Twitter conversation with an ESPN news editor.  The curtain was pulled back on how ESPN's sourcing sausage was made and incredibly, Glazer was told his work was in fact lumped in with others as ESPN's "sources."  It's astonishing and against all the tenants and ethics of journalism to think a media company worth tens of billions of dollars would brazenly scoop up the reporting of others as if they were all just happily doing ESPN's work for them in their own special way – without a paycheck from Bristol.

In the months since, ESPN has been much more clear about properly crediting outside sources and distinguishing between their own reporting and other outlets.  The phrase "ESPN & Media Reports" has appeared on SportsCenter in the place of sources.  It's more transparent and more importantly – honest.

Now via ESPN's PR site, Front Row, we've learned a bit more about what "ESPN & Media Reports" means and the network's reporting policy moving forward.  The structure of how reports appear on television are split into three groupings – reports from ESPN, reports from outside outlets, and reports where information is gathered from both inside and outside ESPN.  What follows from Front Row is comprehensive and an infinite improvement over the Sources Era…

"Among the areas we have addressed with our most recent review is how we present, specifically in graphics, those stories that have been independently reported by our staff in addition to outside entities.

Below is an overview of ESPN’s approach to attribution on TV under the new guidelines.

• We will use our reporters’ names or “ESPN Report:” for breaking news in scripts, on BottomLine and in graphics.

News from ESPN sources AND outside entities: “ESPN & Media Reports”

• When crediting a story that is being reported by ESPN sources and outside entities, we will credit “ESPN & Media Reports” in graphics.

In the current environment of blogs and Twitter, it is often difficult to know definitively who was first to report a story, but it is still important to acknowledge how we initially became aware of that news. So, with a few exceptions, scripts and BottomLine entries will state the news was “earlier reported by” or “previously reported by,” rather than “first reported by,” that ESPN reporter or outside entity. It will be at the discretion of the news desk to determine when and for how long a story warrants this treatment on television."

When it came to ESPN's use of sources, it was never about who got it first and making sure the reporter who pushed "send" 37 seconds before his colleague got all the credit.  It was about ESPN taking the hard work of others and presenting it as their own.  That's wrong and unethical however you slice it.  It was about a lack of trust for ESPN's own reporting, and thereby a lack of trust for ESPN as a whole.  For anyone who asks "Who cares?" or dismisses it as something unimportant, I'd challenge you to allow someone to come and steal your work without attribution and take credit for it and see if your response stays the same.

I realize 99.99% of ESPN's audience is not even going to notice these new reporting guidelines and aren't in tune with what goes on behind the scenes.  Normally, doing the right thing and making sure to give credit where it's due isn't something that should be applause-worthy, it should be the standard.  However, given that this is such a sweeping, transformational change in how ESPN presents reports to viewers, it needs to be commended.  This is a tremendous example of what transparency and building trust with viewers and fans is supposed to be.  Let's hope ESPN not only follows through on these guidelines and begins to restore its reporting credibility, but that other outlets follow suit in being transparent and honest in their own reporting.