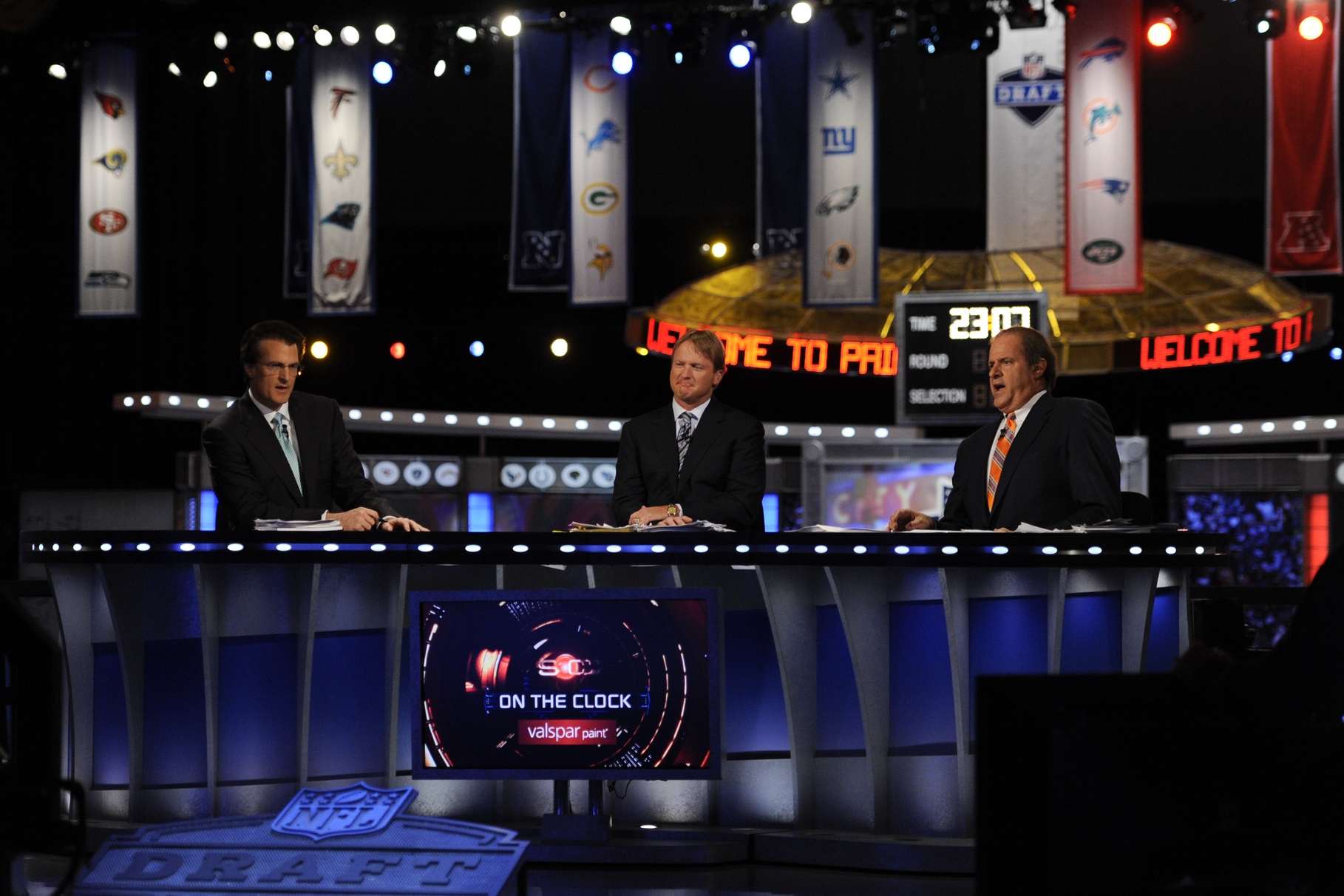 Two years ago, we gave ESPN their due for finally realizing that less was indeed more in their coverage of the 1st round of the NFL Draft. Gone was the cast of thousands, gone were Steve Young and others constantly butting in with nothing to say. Instead, ESPN trimmed the fat by reducing the main stage to draft veterans Chris Berman and Mel Kiper Jr. and new centerpiece to the ESPN NFL stable, Jon Gruden. The streamlined 2011 ESPN broadcast was immediately an upgrade over past years. However, last year ESPN failed to further evolve the coverage, stubbing their toe with an inability to keep up with unfolding events. Also, ESPN once again struggled with their insiders tipping picks throughout the round, infuriating some viewers. How would this year's coverage, the emphasis on preserving the entertainment aspect of the draft, and ESPN's stable of draft personnel fare when facing our own draft grades?

Dare I say it, but Jon Gruden gave a breakthrough performance at this year's NFL Draft. Amazingly, THIS GUY and THAT GUY was kept to a minimum, at least by Gruden's standards. Also, Gruden thankfully didn't sugar coat the lack of impact players at the top of the draft, again contrary to his usual standards. Instead, Gruden was brutally honest, even…critical (gasp!) towards the shortcomings of Dion Jordan's college resume at Oregon and lack of versatility, for example.

Gruden also didn't reach to put E.J. Manuel in the Pro Bowl as with past QBs drafted in the 1st round, instead talking candidly about his rawness. Chucky also gave us some of the best lines of the evening:

"Geno Smith must have a lot of friends at ESPN" – on the hype of Geno Smith as the (assumed) #1 QB.

"This is what America's all about" – Gruden on the #1 pick, the lightly-recruited OT Eric Fisher.

It was refreshing to hear Gruden show the ability to critique as easily (and with as much insight) as he did last night. One wishes the Monday Night Football viewer would hear this side of Chucky (which is present in his QB camp specials) more often than his rush to put every "THIS GUY" and "THAT GUY" into the Hall of Fame on the first ballot. If that were the case, Gruden could truly reach his potential and become the best NFL analyst on television. Of course, that probably depends on whether or not Gruden still has an eye towards returning to the sidelines. Nevertheless, for this night, Gruden earns a mark that puts him at the top of the class.

In a recurring theme throughout the evening, ESPN's coverage tried to convince us this draft was as crucial and exhilarating as any other, despite the universal agreement on its lack of impact players. At the top of ESPN's coverage, Kiper too tried to sell the this draft as chicken salad by immediately saying it would build champions because of the emphasis on the offensive and defensive lines.

However, Kiper also gave the steady, dependable analysis that has led to his staying power at the WWL. Eventually, he was honest that the top players chosen would be worthy of the #5-8 picks in previous drafts. Kiper did a great job explaining the career-threatening heart injury to CB D.J. Hayden* and why Hayden was still a good pick in his opinion. No matter the player, Kiper was ready with the stats, measurables, pros/cons, and all the other info one would need. His chemistry with Gruden also showed signs of evolution over past years. While many have Mike Mayock passing Kiper on their big boards of draft analysts, there's a reason Mel is still the single most synonymous name with NFL Draft coverage.

*The Hayden pick was the production highlight of the evening as ESPN's crew did an amazing job showing the practice film of the collision amidst the Hayden discussion and providing the context of why the story behind that pick was significant. Those crews behind the scenes and the work put in to produce those packages are worthy of an A grade.

Five minutes before the draft began, Ed Werder reported from Kansas City that there was a "high probability" the Chiefs would select OT Eric Fisher first overall. So much for not tipping picks, eh? Adam Schefter's head must have exploded if he heard Werder drop that bit of knowledge. Jeannine Edwards provided solid insight from Philadelphia. Sal Pal had his contractually obligated hit from Jets camp, but otherwise on-site reporters were sparsely heard from so that Gruden and Berman could have the lion's share of the spotlight.

Suzy Kolber gave the usual unimpactful performance interviewing the picks after their selection. The bit of news on Geno Smith not returning from Day 2 (although now he reportedly is coming back) was the only real significant development on the floor. Really, I think we're all just waiting on the day the ReporterBot 3000 spares us all the inane questions referencing LeBron James, childhood dreams, New York fans and the like. Just lets these guys tweet something after being picked and skip the middle man/woman.  And it will never cease to amaze me that the "Bud Light Blue Room" is just the part of the stage where Deion Sanders is being restrained off camera to wait his turn in the spotlight. It's not an actual room, Bud Light!

I know this doesn't have to deal with the coverage, but isn't there something disingenuous about a man who's by and large detested by NFL players engaging in long bro hugs on stage with draftees?  I'm surprised he hasn't suspended a draftee for not holding the hug longer than 3 seconds.  The countdown clock for the NY/NJ Super Bowl was the ultimate sign of Goodell paying homage to himself. Goodell was influential in closing the deal on the NY/NJ Super Bowl, and whether he earned the right or not, the commish brought Phil Simms and Joe Namath on stage for an awkward apperance just to spike his own football.

I don't know why we even bother grading Berman, considering you could transport any of his performances from the past 15 years into last night without missing a beat. From his typical pre-draft game of footsie with Don Goodell to his RANDOM SHOUTING, Berman hit all the usual notes.

Somehow though, the analogies Berman doled out throughout the night were even more bizarre than normal. Berman described the draft as a "football-building draft"… whatever that means. He actually compared a football team to a LEGO fort with squares and rectangles representing linemen. There was also a line about getting your car's oil changed every 7,000 yards… which equates to 3.977 miles, to be exact.

The grade given to the dynamic duo of ESPN insiders depends a lot on how you view the tipping of picks before they are announced by the commish. Personally, I've never been one for newfangled buzzwords, but the phrase "second screen experience" epitomizes how I enjoy the NFL Draft.

With Twitter, one can follow the up-to-the second breaking news on picks, trades, etc. while seeing the made-for-TV spectacle unfold on screen. The benching of Adam Schefter from Twitter, in hindsight, was an overreaction by ESPN. Schefter has millions of Twitter followers for a reason, his is one of the most valuable voices in football journalism at ESPN. As long as ESPN didn't tip picks on air, it's a wonder why Schefter's blackberry was being held under lock and key.

And as i was saying before I was so rudely interrupted at 8 pm….Bet Geno Smith, Manti Te'o and no RBs wind up going in round one.

Schefter and Mort also broke news of the Bills trading down, the Vikings trading up, and other wheeling and dealing throughout the evening. But by the end of the night, Schefter was largely relegated to Manti Teo'o duty, which grew incredibly tedious and insufferable in the latter stages of Round 1.

Because of the tipping controversy, the two certainly had a muted presence throughout the evening, and it will be interesting to see how ESPN continues to adjust the role of their insiders at future drafts.

ESPN followed through on their promise not to tip picks on air, leading to the surprise of the night with the Dolphins trading up to take Dion Jordan when it looked for all the world another OT was the pick. There was also some suspense when the Vikings traded back into the first round to select Cordarrelle Patterson.  ESPN going with limited commercials throughout the evening was also a major boost to the broadcast, aside from hearing more Chris Berman.  As the night wore on, the celebrity aspect of the draft became overplayed with Geno Smith and Manti Te'o not even going in the first round.  Also, can we delay Russell Wilson becoming the face of the NFL Draft at least until he survives his sophomore slump?

ESPN gets more criticism than other networks because of their position as the self-proclaimed worldwIde leader in sports. They're the ones who have set that threshold. As long as Chris Berman is still anchoring ESPN's draft coverage, this is one event where they won't live up to that standard. Is it unfair to pin most of the criticism on just one person? Not at all. I understand Bristol will cite those who aren't plugged in enough to notice Berman's dependency on the same old act or haven't grown tired of his clown show.  "They got the Sharrif, and now they got the deputy" is an all-time Bermanism and not in a good way.  The silent majority can't overcome the basic truth that ESPN's coverage would be better off without Berman. Were Trey Wingo or Suzy Kolber in the anchor chair, the final grade could be a full letter or more higher.