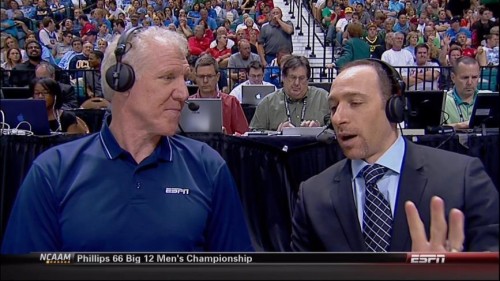 Did you know the college basketball season is almost upon us?  Who would have thunk it!  With the sports calendar compressing, the 24/7 news cycle, our obsession with celebrity, and football ruling the world as we know it, things like an entire season of college basketball kind of sneak up on you!

Have no fear college basketball fans, there will be no shortage of games being televised for your enjoyment this season.  The ESPN conglomo will air an astounding 1,500 college basketball games this season, which evidently is possible without extending the season to July.  With the season upon us, ESPN has released their commentator assignments for every day of the week from Big Monday through Saturday primetime and beyond.  Much of the lineup remains the same as past seasons, including the return of Bill Walton (THROW IT DOWN BIG MAN!!!) but there are a few changes…

* Bill Raftery's departure for Fox Sports 1 breaks up one of my favorite announcing teams anywhere – his partnership with Sean McDonough and Jay Bilas.  Those two return to call ACC games on Big Monday but it won't quite be the same without Raft. At the other end of the spectrum, Mike Patrick and Len Elmore shift from the ACC to The 'Merican.

* Shannon Spake gets the well-deserved spotlight sideline assignment along with the top team of Dan Shulman and Dick Vitale on ESPN's Saturday primetime matchup.

* Beth Mowins and Kara Lawson form what has to be one of the first (if not the first) all female team to cover men's sports for a major network.  That is quite the achievement and they'll call West Coast games on Saturdays for ESPN2.

* Contrary to reports of the demise of his television career, Bob Knight returns for another season at ESPN with a lone Thursday night SEC assignment.  He's not listed as a studio analyst so it could be that Knight's role will be very limited this season.

* Two teams to keep an eye on that should be very good but might be flying under the radar: San Francisco Giants announcer Dave Flemming and former Arizona star Miles Simon working Tuesday Big 12 games for ESPN2.  Simon in particular has impressed me the few times I've seen him work for ESPNU in the past.  Also – Joe Tessitore and rising star Sean Farnham working Thursday Big Ten games.

* Bill Walton returns with partner Dave Pasch in one of the most entertaining broadcast teams known to mankind.  Set your DVRs for midweek Pac 12 games people, you won't be disappointed.