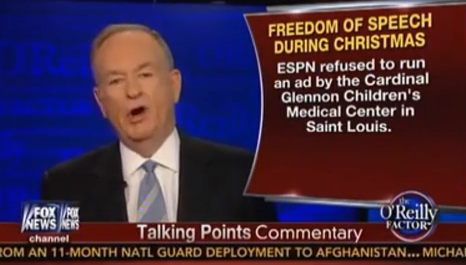 ESPN was an unlikely target in the infamous War on Christmas this week thanks to a commercial that was supposed to run during an ESPNU college basketball broadcast from Cardinal Glennon Children's Medical Center. Last week Bristol said no to running this advertisement that made mention of celebrating the birth of Jesus and sending messages of hope to sick children…

ESPN's rejection of the ad was given a national platform Wednesday night when Bill O'Reilly excoriated Bristol for rejecting the ad on religious grounds. The William Wallace of the War on Christmas, Sarah Palin, also criticized ESPN on her Facebook page and the story caught fire in conservative media outlets.

After it found themselves in the middle of the War on Christmas, ESPN predictably changed their mind on Thursday. In a very brief statement on their Front Row website, ESPN said they would air the original commercial with the Baby Jesus and all after an additional review.

The executive director of the Cardinal Glennon Foundation, Dan Buck, said the ad was rejected because the words "Jesus" and "God" were "problematic" for the folks in Bristol. Interestingly enough, he also said publicly that ESPN rejected an initial appeal from the foundation based on the company's advocacy standards. Only after the story found nationwide attention on Wednesday did ESPN suddenly reverse course. Funny how that works.

I'm as big a fan of the Baby Jesus as anyone, but this whole War on Christmas is a cottage industry meant to do nothing more than stir up controversy and ratings. That's why it's so surprising to see a company as PR obsessive as ESPN take a step straight into the political crossfire. As a company, ESPN has long tried to keep as much distance between themselves and political controversy as humanly possible. The network has even reportedly told talent to "avoid political commentary" in social media.

Surely someone at ESPN should have had the foresight to envision this story going public given the current political climate and the uproar it would create, manufactured or not. When was the last time anyone gave a flip about a commercial on ESPNU, anyways? If anything, ESPN caving into public pressure so easily and flip flopping only after being called out on the national scene makes the network look even more oblivious.

Then again, maybe ESPN is smarter than all of us and it was all a sneaky ploy to increase ratings for that Northern Iowa-VCU tilt on Saturday.