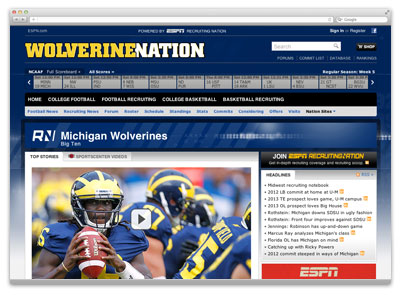 A look at one of the former ESPN recruiting sites.

Back in 2011, ESPN made a lot of noise by announcing they were joining the likes of Rivals, Scout, and 24/7 with their own offering of sites. Just two years later ESPN has pulled the plug, letting go of editorial staff as well as essentially debranding these now defunct sites and replacing them with generic tagged blog content that can be found elsewhere on ESPN.com.

Message boards, a key engagement point and traffic driver for recruiting sites, have been removed. At ESPN they were what I termed "digital ghost towns" with little activity.

Noah Stanley, COO of competitor 24/7 notes their is one site still operating (USC) although that partnership is likely to wind down as well.

For those wanting a quick history lesson, ESPN has had various opportunities and attempts to gain market share in the recruiting subscription industry, all of which have failed with very little success along the way.

I've always been interested and even highly skeptical and cynical of ESPN's continued efforts here. They're more than a decade late behind Scout and Rivals and historically have felt they can carve out some audience and revenue with little expertise, support, and differentiation. The basic rationale has always been "Well we're ESPN, THE worldwide leader in sports, so just our logo on a site and everything is going to be gangbusters!"

This now leaves Fox owned Scout, Yahoo owned Rivals, and upstart 24/7 going forward as pay services for recruiting news. We're hearing Scout will not be pursuing their platform and rebranding initiative to Fox Sports Next that had to be rolled back last fall in the foreseeable future.

Prior to ESPN's push in 2011, they explored partnerships with 24/7 ahead of their launch in 2010 although a partnership never came to fruition. Given 24/7 has steadily been climbing in terms of traffic metrics and subscriptions, suffice to say ESPN probably would have been better off partnering rather than trying to build on their own.

Will ESPN take another crack at on their own or perhaps will they look to purchase 24/7 or another upstart? Either way it's a rather large void for ESPN, who is typically strong across all the various content and business initiatives they opt to compete in.