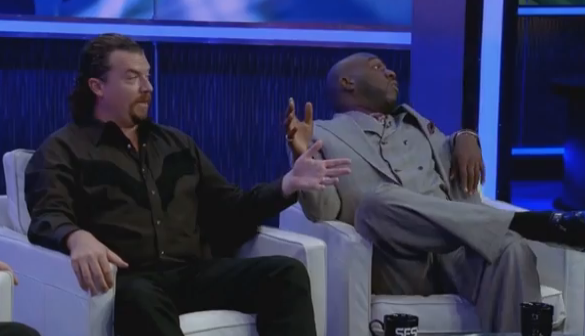 Personally, if Danny McBride and Jody Hill's gloriously profane HBO creation Eastbound and Down had ended after one season, it might be one of the most perfect television shows ever made. The subsequent three seasons, while still being generally funny and an interesting character study, have diluted the show and Kenny Powers (still played perfectly by McBride) himself. The audience has clearly signaled that they're tiring of it, with the fourth season premiere shedding about 40 percent of the third season premiere's audience.

However, there's something that's made the fourth season of Eastbound and Down kind of delightful to watch. The season premiere has set up that Kenny Powers has left his life of fame and baseball to settle down with his beloved April and their two children. A chance meeting with one of his former baseball teammates, Guy Young (Ken Marino), has afforded Kenny the opportunity to guest star on his talk show, Sports Sesh.

Now, Eastbound and Down has always remained a somewhat sports-adjacent show, despite the career of its main character. The third season, with Kenny trying to climb his way through the minors, is probably the closest the series have ever gotten to really trying to be a show about an athlete. Even then, it's still mostly about finding some sort of redemption in this terrible human being who keeps finding himself with second chances.

McBride and Hill, the creators and executive producers of the show, have really done their homework with the creation of Sports Sesh with Guy Young, However. Here's a video of the highlights of the show from a recent episode (NSFW: Language).

While very few sports shows use a live audience, and none of them use profane language, there are some really excellent, subtle details in Sports Sesh. The opening graphics in the intro are all perfect. The overhyped bros at the start of the show and weird, tense, testosterone-fueled vibe of the whole proceedings. Plus, Dontel is the perfect example of the troll dominating the show.
Seeing Kenny sort of rise up in the second scene and take down Dontel is weirdly gratifying. Though we know both characters are, for separate reasons, terrible human beings, the very fact that Dontel has been set up as this sort of hyped-up combo of Skip and Stephen A. means that seeing him get cut to size is exciting. While it may not be the show it once was, kudos to Eastbound and Down for providing laughs at the expense of another dumb aspect of sports culture.