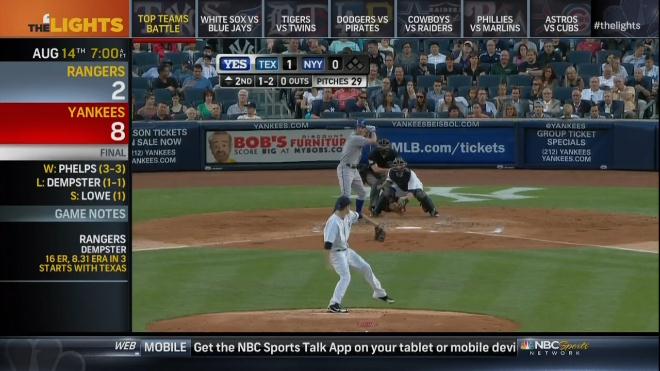 Last August, NBCSN announced a new highlights show for weekday mornings – The Lights.  The show offered a throwback, counter-culture approach to the progression of the sports highlights show.  No debate.  No analysis.  No talking heads.  No gimmicks.  No Budweiser Hot Seat Cold Hard Facts Presented By Coors Light And Sponsored By Miller Genuine Draft.  Strictly highlights.

From 7-9 AM ET in 20 minute blocks, the only thing the viewer would see would be highlights from the previous night's games along with a rundown scroll and a sidebar of statistics.  Anchor David Diamante wasn't even seen, he was merely a voice on the show as the highlights took center stage.

For some sports fans, The Lights was a breath of fresh air.  Something different.  And, the program was a smart way for NBCSN to provide something different than SportsCenter or ESPN's host of debate programming.

There was just one problem – nobody watched.  The Lights only averaged 21,000 viewers in the first three weeks of April as reported by SBJ.  During the NHL Playoffs it was placed on hiatus with the word from NBC Sports programming czar Jon Miller that it would come back at a later date in a different format:

The Lights was supposed to come back in August.  It's now almost the end of October and The Lights is still missing from the NBCSN lineup.  And, it will remain missing for the foreseeable future as there are no plans to bring back The Lights as a standalone show.

When asked last week about the future of the show and the stated plans for its fall return, an NBC spokesman said, "The brand continues on NBCSN, but it’s not a dedicated show at this time."

The Lights now exists as brief highlights within the recently launched news show SportsDash at noon.  For instance, the top plays of the weekend were shown on Monday's episode as "Bright Lights."  Today it was "Social Lights" for a couple plays from Rams-Seahawks.  Beyond those few minutes though, finding general sports highlights on NBCSN is like trying to find Major League Lacrosse analysis on First Take.

Much has been made of Fox Sports 1 challenging SportsCenter head on with the launch of Fox Sports Live and their ratings have been decent, as long as there is a significant lead-in audience.  However, NBCSN has seemingly gone in the opposite direction, abandoning the concept of a dedicated highlights show altogether.  Beyond The Dan Patrick Show and SportsDash, which is really more of a news and analysis program, many of the shows are single-sport centric or magazine style programs.  NBCSN has shifted to focusing on shoulder programming for their rights contracts (NHL, EPL) or the NFL (Turning Point, Coach's Clicker, Pro Football Talk, etc).

It's clear that highlights aren't a big focus of NBCSN at the moment as they continue to build slowly through niche sports.  Some of that is due to NBCSN's strategy as a whole, featuring sports like the NHL, EPL, F1, MLS and other niche sports often neglected by ESPN that have loyal followings and owning them completely.  Why air a highlights show that nobody is really going to watch anyway until you can be more of a force in the sports world?

The larger issue at play is the lack of an appetite for a dedicated old-school highlights show.  However nostalgic we might be for highlight shows of yesteryear, nobody is watching them anymore.  It's why ESPNEWS canceled Highlight Express and why NBCSN canceled The Lights.  People can simply get the highlights they want when they want online and few fans are interested enough to sit down for 20 or 30 minutes and get solely highlights.  In early April, infomercials were regularly outdrawing The Lights.  That's right, Paid Programming beat the content NBCSN was actually producing.  As just one example, on Monday April 1st, The Lights drew 17,000 viewers at 7 AM ET.  At 8 AM it drew 20,000 viewers.  In the middle of the night, at 5 AM ET, Product Showcase drew 33,000 viewers.

Given those viewership numbers, it's no wonder many sports fans didn't even notice that The Lights haven't been turned back on at NBCSN.