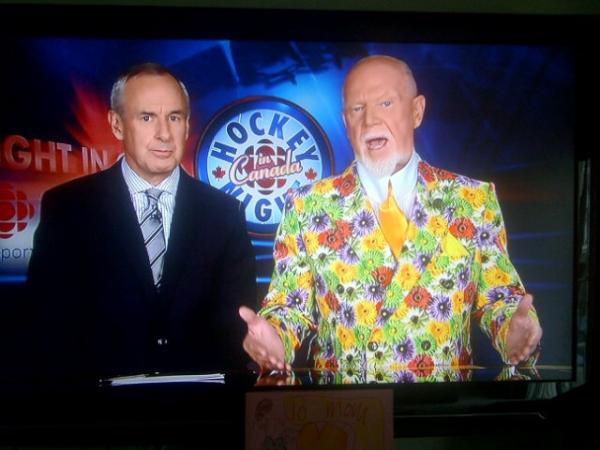 CBC hockey commentator Don Cherry's controversial statement Saturday that female reporters shouldn't be allowed in male dressing rooms provoked plenty of outrage from both industry groups and Twitter users, led to a Kif-like sigh on-air from counterpart and frequent foil Ron MacLean, and created a firestorm that still hasn't entirely died out a few days later. However, some (not all) of Cherry's colleagues and his company haven't exactly abandoned him. MacLean's since defended Cherry, and the CBC itself just said Cherry's views are his own, which isn't the strongest response in the world. Given how out of sync Cherry's views are with both employment law and decades of practice (bizarrely enough, the first female reporters in a professional sports locker room were in the NHL, as Robin Herman and Marcel St. Cyr gained access at the 1975 All-Star game, and later that season, Cherry became the first coach to allow Herman locker-room access after regular-season games), some might have expected his company to come down harder on him. However, the CBC's (lack of) response is perhaps to be expected given Cherry's role at the network, which essentially has him as a similar pot-stirrer to ESPN's Skip Bayless.

Cherry's show, Coach's Corner, is almost unique in sports broadcasting, as it's an intermission show that not only retains a considerable amount of the game broadcast's viewers, but also manages to pull some new viewers in who don't particularly care about the game. In Canada, it's not uncommon at all to see people flip on a TV Saturday evening just for Coach's Corner, then turn it off and return to other activities. (It's conceivable the NBA on TNT crew can have the same effect on some viewers, but it's hard to think of many other halftime shows that can.) Cherry is such a huge figure that he's had his own Molson beer cans (complete with a fantastic commercial series, and he even starred in one of those spots), but the beer was quickly pulled because some parents complained it was too popular with kids. (As a kid who made my father buy one of those Bubbas so I could keep the can as a collectible, which I still have, I can see their point.)

The thing is, Cherry is much more than merely a hockey commentator. He's a national figure. Cherry finished seventh in CBC's 2004 Greatest Canadian voting, ahead of John A. MacDonald (Canada's first prime minister), famed inventor Alexander Graham Bell, and even national hero Wayne Gretzky. Over the years, Cherry has chimed in on everything, expressing his disappointment with Canada's reluctance to join the second Iraq War, complaining about Toronto's "pinkos that ride bicycles and everything", comparing a Finnish coach's name to a dog food brand, criticizing Russia's culture and blasting the "Europeans and French guys" that wear visors. The controversies have certainly hurt Cherry's reputation in many quarters, but his ratings are still strong. For all the people turned off by what he says, many more are turning on the TV to find out just what he'll say next.

Beyond that, the CBC needs Cherry. CBC Sports has suffered one prominent setback after another in recent years with the rise of cable sports powers TSN and Rogers Sportsnet, losing rights to everything from the CFL to curling, and Hockey Night In Canada broadcasts are the main marquee sports rights they have left. Like it or not, Cherry's an important part of those broadcasts. While many fans might prefer a different intermission format, it's hard to see any alternative coming close to Coach's Corner in the ratings.

Cherry's unabashedly-conservative political views may also matter. Those on the right of the spectrum often accuse the CBC of a left-wing bias, so employing (and not particularly censoring) a guy like Cherry can be a useful defence for the organization. If the CBC had criticized or suspended Cherry here, there would have been plenty of outcry from the political right, and that's something the broadcaster would probably prefer to avoid.

If a lower-profile CBC employee had made comments like Cherry's on-air, a suspension might have been forthcoming, but it's not all that surprising that the broadcaster's response here is essentially "That's just Don being Don." (In fairness to the CBC too, MacLean vociferously disagreed with Cherry on air, and the network hasn't publicly punished their employees who criticized Cherry's comments on Twitter, so they are at least allowing comments from both sides.) Don Cherry is an essential part of the CBC at the moment, so while the lacklustre response to his comments is disappointing to many, the broadcaster's rationale does make some sense.

In some ways, Cherry and Coach's Corner are the Canadian equivalent of Bayless and First Take (recently named one of the 20 worst shows on TV, although it's hard to take that list seriously thanks to it including the brilliant Community). First Take gets more criticism than anything else on ESPN, and deservedly so; it contributes to the network's identity crisis and its struggle to balance news and entertainment. Similarly, Coach's Corner can't easily be defended as a serious analysis show, and in some ways, continuing to air it does harm the CBC's reputation. It's obvious why both networks continue to persist with shows that take so much flak, though: ratings. First Take hauls in both those viewers who agree with Bayless and those who want to say what dumb thing he'll say next, and Coach's Corner does the same. Nothing else is likely to do as well ratings-wise as either show does in its slot. That doesn't mean either Cherry or Bayless deserves to be on the air, and it certainly doesn't mean that they can't be criticized, but it's easy to see why their employers stick with them despite the torrents of criticism. Just how far networks should go for ratings is a legitimate debate, but the CBC has clearly decided that Cherry's current comments are something it's fine with airing. He may be out of touch and easy to blast, but Cherry still brings in the viewers, and that's what appears to matter most to his employer.