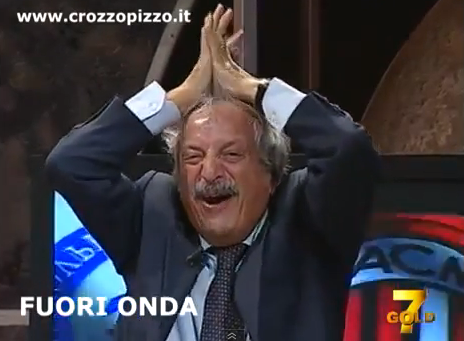 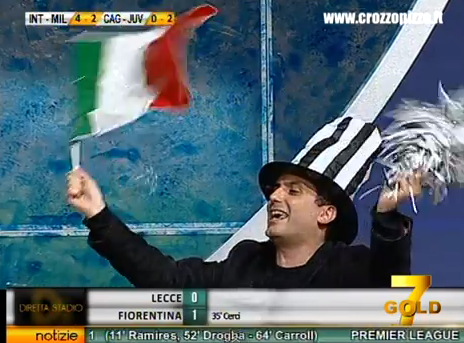 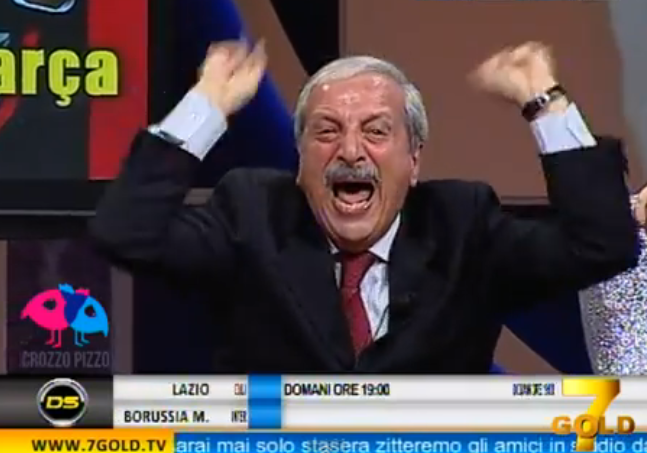 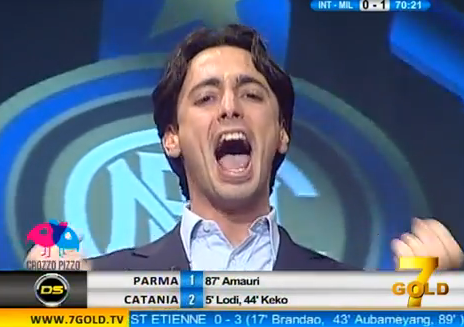 Have you ever wondered what it would be like to watch analysts and journalists watch games as they happen? For instance, would you have an interest in watching the “Sunday NFL Countdown” guys watch a Sunday of NFL action? Or, would you want to watch TNT’s “Inside the NBA” line-up watch a TNT Thursday Night game? If you said yes to any of these questions, you probably have too much time on your hands (like I do). But, as always, the internet provides answers to these questions before you even knew they existed. And so I present to you DirettaStadio: Italy’s way for you to watch people watch soccer games.

The formula for this show is quite simple. Get a range of pundits/journalists and one or two moderators and put them in the same studio while they watch a day’s worth of Italian soccer. The result is as you would expect: a bunch of strong personalities shouting at each other (in incomprehensible Italian of course) that I’m right and you’re wrong, with the occasional light violence and wet willie (I wish I made that up) thrown in. Before you ask, yes this show is real and not a parody of anything. Throw in a couple of airhorns, random dancing and weird prop gags, and you have a show that’s so stupid and crazy that frankly it can’t be ignored. And we haven’t even gotten to the twist yet…

Imagine if the Sunday NFL Countdown guys all had teams they openly rooted for and made it fairly obvious, while trying to provide meaningful analysis. It would be hilarious, but Lord knows that would never happen on US TV. Things are done differently in Italy, though. Not only do you have pundits screaming at each other on DirettaStadio, you also have journalists who are also rabid fans commenting on games for their teams as they happen. The results are a sight to behold, and thanks to YouTube, I have video evidence to prove it.

First we have Filippo Tramontana, an Inter Milan fan who looks like he could either be a college student or your local stock broker. He loves the Nerazzuri. A lot. And he makes no bones about it. For instance:

Wonder if he’s happy they won? That was simply a basic cup game, but he treats it like Inter just became Champions of Italy. All of the reactions, including the defeated ones to opposing goals, are well worth the click.

Next, we have Antonio Paolino, who might very well be Dan Le Batard’s long lost Italian cousin. He’s a Juventus supporter, and he also likes to remind you about it. Constantly.

Be honest. You could see Le Batard doing some of the things Antonio did. You might want to erase those thoughts from your memory as to prevent night terrors, but you could see it.

And now for the crème de la crème, the showstopper and headlining act of this bizarre show: Tiziano Crudeli. He’s an infamous AC Milan fan, whose exploits have already been explored on this site. And, with the proper footage, we can see why.

You think he’s happy they won? Now you might be thinking, what happens when his Rossoneri lose? Take a look. With his reactions, sometimes you can’t tell if Milan won, lost, or his dog died. But, as I hear you slaving away at the comments section, what happens when two of Inter, Milan, and Juve play each other? DirettaStadio pulls out all the stops, as you can see here.

Why hasn’t the sports loving internet made this more famous? How many memes could you make out of this? And for the atom bomb on this show, watch what happens when two of the Big 3 play, and the other has a chance to clinch the scudetto (title of Serie A) at the others’ expense?

Internet, please love this show. It’s too amazing and hilarious not to. I know most of us don’t speak Italian, but you don’t need to speak it to enjoy this show. They broadcast on every match day for domestic and European competition involving an Italian team, and the YouTube account (CrozzoPizzo) puts up the videos the same day as the games. If you look hard enough, they even live stream their show on matchdays. The antics make this show well worth the time to watch.

The tagline for this is Non Solo Calcio, meaning “Not just Soccer.” This show certainly lives up to that billing.