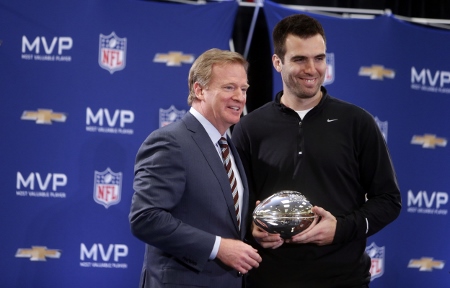 In a lengthy and excellent Outside the Lines piece on Roger Goodell, an interesting, but buried, tid bit jumps out at us:

"In September the NBC Sports Network planned to run a piece produced by Sports Illustrated about spouses and caregivers of retired players. But in an email written a week before the piece was to air, a person involved in the production told a colleague "the NFL went nuclear and was trying to get it killed." Sources at both the NFL and NBC say they were not aware of any contact between them about the story. Ultimately, say SI and NBC, they had a disagreement about whether the piece should air. It never did."

Goodell is a walking contradiction: he won't directly admit the game causes lasting brain damage, but is claiming to work on making it safer and more exciting for the fans at the same time. The players don't trust him. The fans don't trust him. He tells those close to him he is terrified a player will die on the filed, but then…

Goodell was ripped by House Judiciary Committee members and former players. Repeatedly, he was pressed to acknowledge a link between playing football and cognitive erosion. Despite the fact that the league's retirement board had already made the link internally years earlier, he refused.

Terry Bradshaw made a comment to Jay Leno that basically said Goodell only cares about player safety now because of PR and lawsuits. At the end of the day, for Goodell, it's all about what makes the league money. According to this OTL piece:

In 2013 the NFL will almost certainly exceed $10 billion in annual revenue for the first time, drawing closer to his goal of $25 billion by 2027 that he's shared privately with the owners. In 2014 the NFL's television contracts with CBS, NBC and Fox will increase 63 percent to an average of $3.1 billion a year. Next fall ESPN will begin paying the NFL $1.9 billion a year, up from $1.1 billion.

There is no doubt that Goodell is good at generating revenue for the NFL. But underneath that money lies the former players who have permanent brain damage and their wives who have to live with it on a daily basis.

What Goodell knows, but doesn't care to admit, is that we know about the lasting effects of multiple concussions – we've seen proof of it. We've seen tragic stories like Junior Seau's suicide and subsequent lawsuit his family filed against the league.

We know. We know he knows. We know he knows we know he knows. Complicated? Yes. Airing that special would have done nothing to change what we already know, but it shows the extent to which Goodell will go to control the message. With the NFL and Goodell reportedly killing a controversial segment before it had a chance to air, it also shows the extent networks will go to appease the shield. Ironically, since Goodell probably thought squashing the report would help protect his image, it only goes to further his image as a hypocritical tyrant.