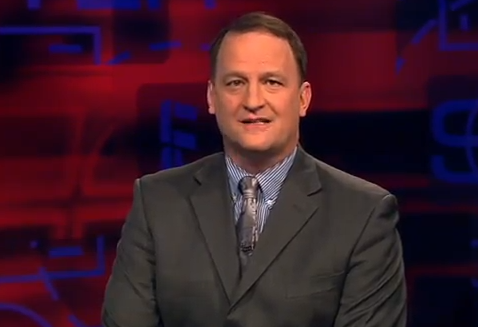 Late Wednesday night we were sent a link by a man named Tony Adragna about an encounter with ESPN college basketball analyst and Indy radio host Dan Dakich.  The entire story is worth a read as Dakich made it a point to call out Adragna on his radio programs multiple times yesterday amidst one of the busiest news days of the year.

The Reader's Digest version goes like this – it started when Adragna tweeted this questioning Dakich for painting members of the media with a broad brush since Dakich is himself a member of the media.  Dakich got wind of it somehow (Twitter searching his name possibly) and hit back at Adragna on his radio show.  Adragna sent an e-mail trying to clarify his position and Dakich again fired back.  Things got really bizarre though when Dakich made a threat to blackball Adragna, a recent Indiana broadcast journalist grad, from ever getting a job in the sports media.  Adragna posted the audio of this quote from Dakich on his blog:

One phone call and you're done.

That's a national college basketball analyst and former coach of the Indiana Hoosiers threatening to blackball a recent college graduate and basically destroy his career before it's able to begin.  And for what… a tweet offering a mild critique?

It's no secret the sports media is full of some enormous egos, but I've never seen such a brazen attempt at an abuse of power over something so insignificant.  Dakich is a great college basketball analyst, probably one of the two or three best ESPN has, but this is some kind of bizarre behavior.  (For what it's worth, Dakich also got into a lenghty Twitter fight with former Hoosier A.J. Guyton where he bragged about his own popularity at Indiana.)  Does Dan Dakich have an enemies list that he keeps updated and sends to network executives of people who don't like his radio show just in case they ever want a job one day?  It's too absurd to be real and makes you think Dakich is playing some kind of cartoony supervillain.

But if this story wasn't weird enough, after taking a pummelling in social media for his bullying behavior once the story went viral Thursday morning, Dakich tweeted that he's invited Adragna on his show to co-host next week, saying in a rather jocular way, "the kid has sack."

Love the comeback by @tonyadragna ..invited him to co host when I get back next week..kid has sack..love it

So let's get this straight.

1) Dan Dakich hates being criticized on Twitter or via e-mail, to the point of threatening to call executives at ESPN, NBC, and CBS to make sure said person never gets a job in the business.

2) If you write a blog post about being bullied and threatened by Dan Dakich and have the audio evidence to back it up, he'll invite you to co-host his radio show with you because you have "sack."

Does anybody understand this at all?